First published in 1973, Maria Campbell’s memoir of growing up as a “halfbreed” sheds light on what life was like for a Métis woman in 20th-century colonial Canada.

Close to 50 years later, in the era of Tarana Burke’s #MeToo movement, Halfbreed is being re-published by McClelland & Stewart this November in a new edition that will feature two pages Campbell originally included in her memoir, about her rape by RCMP officers when she was 14 years old. These pages were cut by M&S from the first edition for fear that the RCMP would retaliate or halt publication.

In the context of the ongoing Missing and Murdered Indigenous Women, Girls, and Two-Spirit genocide in Canada, as well as the long history of the RCMP’s so-called starlight tours – a practice in which police drive Indigenous people outside of city limits to abandon them on roads and highways – and other violences, and the continued injustice in the court system for the families of Indigenous youths Tina Fontaine, Colten Boushie, and others, Halfbreed’s re-release is timely and needed.

When I polled Indigenous readers on Twitter as to what they would like to ask Campbell, CBC Vancouver reporter Angela Sterritt (Gitxsan/Amsiwa) wrote: “Nothing I’d just stare in aw[e] and praise her.” Sterritt’s tweet should give some context about Campbell’s distinguished status as she enters her 80th year.

Jenny Ferguson: Tanisi, Maria. It’s an honour to speak with you. To position myself, my father’s ancestry is Métis and white, and my mother is white. I’m trying to reclaim my Métis roots and my first time reading Halfbreed was both a pleasure and an experience in sitting in – and actively feeling – my own colonization.

I’m wondering how you think the new generation of Indigenous readers will engage with Halfbreed, a book about Métis life, written not by anthropologists but by an Indigenous woman?

Maria Campbell: It’s a new generation but colonial Canada is not long ago – it’s today. Some people might say it’s not as bad – because I’ve thought that – but it’s not easy when you are trying to comfort a mom who’s just lost a child to suicide or murder or child services or any number of things our people are up against. We have the highest number of kids in care [in Canada], more than we ever had in residential school. Do you think those children are not being abused?

Indigenous people account for the highest suicide rates in the country. There are all of our missing and murdered people, not just women. No drinking water, little or no food for lots of children. This is Canada. I’m sorry, I know identity is important for many people today, but identity is just a small drop in the bucket for most of our babies. They know that who they are is why they are poor and invisible.

I do hope that after reading it there will be many conversations and more questions asked. Not just about how bad things are right now, but about history and diversity by all readers, including Indigenous people.

Most people know little about Michif or halfbreeds, even less about “road allowance people.” We get lost in all the categories and statuses created by government policy and courts, which cause confusion. But that’s what it is meant to do and we need to talk about that.

I hope that we, Indigenous people, talk about our kinship to each other and why there is so much animosity between us and where that comes from. I wrote about it in the first edition and I left it in. I didn’t change anything, most of it I didn’t want to change because that was where I was at back then. Now I am not there anymore, but those prejudices and bitter feelings are still prevalent in our community and we have to ask why, if we are going to heal.

I also would like a conversation about why I do not consider myself a part of the #MeToo generation.

JF: I’d love to hear more about this, if you’re willing to share.

MC: I, in no way, am disrespecting the #MeToo movement. I honour and am grateful for each and every woman who comes forward and continues to come forward. She makes it safe for all women. But I don’t want what happened to me and to other Indigenous women to get lost [in discussions about] sexual violence and harassment because it is bigger than that. It is about 600 years of misogynistic, colonial history. The taking and the raping of our homelands began with the raping, brutality, death, and dispossession of Indigenous women and children. That is where no one wants to go. But those are conversations we must have.

JF: That’s what I go to books for: a way of seeing/knowing that I didn’t have before. And that’s what you’ve given me here. Reading books in which the truth of the full experience living as a Native person in colonial Canada is detailed is something, I believe, too few of us have had the chance to experience. Are there other recent or forthcoming Indigenous memoirs you would recommend we read alongside this new edition of Halfbreed? 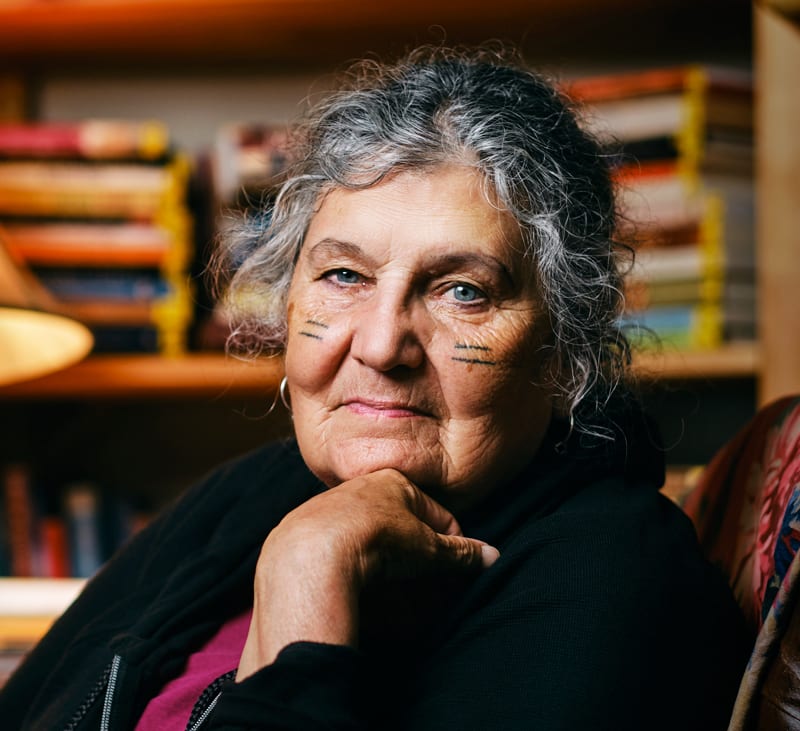 MC: I think you/we should read all of them. My old mentor, to illustrate a point, once lifted a puzzle my children had finished putting together and tossed it in the air. It broke up in hundreds of pieces. “There,” he said, “that’s what happened to us – to our history, our culture, our lives – when each one of us has one or two or six pieces. If we put them together, we can rebuild.”

If you read my book, you get a few pieces of the story, but if you read the other books, listen to the songs, hear a fiddle tune, listen to a drum group, watch a dance, take part in a ceremony, join in a prayer, the tears and laughter, all will open the door to a “whole” story. It’s easy for my story alone to give you a stereotype, especially when as colonized humans we are prone to them.

JF:  “They make you hate what you are.” This phrase is attributed to your grandmother, Cheechum, who lived until she was 104. She has the kind of perspective I can’t imagine in my mid-30s, but one that I admire.

To me, Halfbreed is about how racist systems at work in colonial Canada teach Indigenous peoples to hate who and what they are. But it’s also about learning how to shed that hate. How to remove the blanket you’ve been handed to cover a shame that’s been ingrained in you because of who you are.

Some Indigenous and mixed-Indigenous people I’ve talked to very much struggle with claiming the term “halfbreed.” Though in your memoir, this term is “almost like happiness, pride and hurt all at once.” Can you speak about the dichotomy between hating who and what you are and the desire to label yourself?

MC: I keep hearing and seeing those words “hated herself and her people, hated who she was,” and I can’t relate to them because I never hated being a halfbreed. Or at least I never felt that inside. But I hated what it represented, how it was represented. I hated the poverty, shame, worthlessness. I hated being invisible and at the same time so visible. I hated how it paralyzed us and wounded our souls and still does. I was and still am often angry although I have learned to use that anger in a more gentle way.

About reconciliation, there is no such thing. We can’t go back to a good time to begin again because there never was a “good” time. But conciliation – kwaysk astaswin – to put things right. I can do that if someone is willing to work with me. I love my babies and I want a better world for them.

All photography by Dave Stobbe