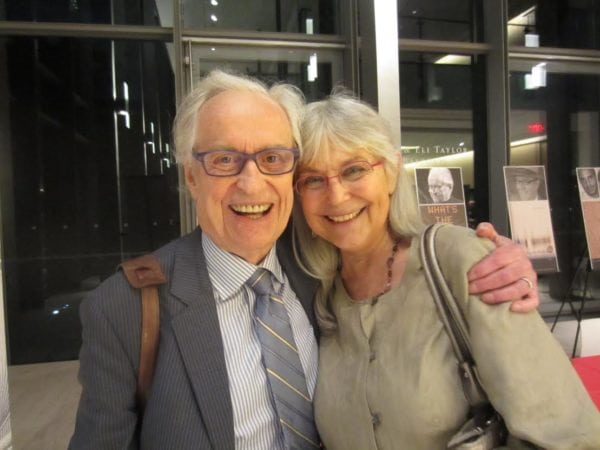 “I am happy,” wrote the poet David McFadden in a 2014 article for Toronto Life. “I have many joys. My wife and I have a strong marriage. I had a wonderful time helping to renovate our beautiful house on Havelock Street in Dufferin Grove, and I feel blessed living in it. I love the cat, the bird feeder, my wife’s cuisine, seeing movies.”

The occasion for McFadden’s declaration was an essay about his diagnosis, at age 71, with logopenic aphasia, a type of Alzheimer’s disease that robs its sufferer of vocabulary – a particularly painful affliction for a poet. “What is it like to be me, a poet without words, a poet who can’t speak?” McFadden wrote. “I know what I want to say, but I can’t say it.”

That Toronto Life essay is dated June 4, 2014, almost four years to the day before McFadden died (on June 6, 2018) at age 78. The Griffin Trust for Excellence in Poetry posted the news of McFadden’s death last Wednesday, one day before the gala to bestow the 2018 Griffin Poetry Prize, an award McFadden won five years previously for his collection, What’s the Score? (Mansfield Press).

It was not the first time McFadden had been nominated for the Griffin, Canada’s richest prize for poetry. He was shortlisted in 2008 for his selected poems, Why Are You So Sad? (Insomniac Press), but lost out to Robin Blaser’s volume of collected poems, The Holy Forest. “I stood beside him as the winner was announced,” says McFadden’s editor and friend, Stuart Ross. “He turned to me, grinned, and said, ‘You could have edited my book better.’”

McFadden’s tongue-in-cheek reaction to losing the Griffin testifies to his humour and generosity, both qualities that people who knew him remarked on. In keeping with his willingness, following the Alzheimer’s diagnosis, to remain positive and focus on the good things in his life, his poetry was also filled with élan and a determination to embrace life in all its manifestations.

“David McFadden is one of the few poets whose primary gift is that of joy,” says poet Paul Vermeersch. “His poetry is a joy to read, a great and ineffable joy. This is such a rare talent. Profundity, menace, melancholy, the intellectual flamboyance of the cynic: these effects are mere child’s play compared to the wonder and joy of McFadden’s work.”

McFadden was born in Hamilton, Ontario, in 1940. He joined the Hamilton Spectator as a proofreader and worked his way up the ranks, eventually stepping away in 1976 to pursue his own writing full-time. He published prolifically, including a stint in the 1980s during which he penned the Writer’s Block column and served as a contributing editor for Q&Q.

He was known primarily as a poet, though Ross points out that he also wrote novels, short fiction, and travel writing. “His book The Great Canadian Sonnet is a hybrid work that can’t quite be defined,” Ross says. “Through all of this prose, though, runs a poetic sensibility.”

That sensibility took its cues from the beats – Alan Ginsberg and Jack Kerouac – and equally from plainspoken 20th-century poets such as Frank O’Hara and John Ashbery. “He brought a conversational directness and engagement, an aura of wonder and curiosity, a deeply human acceptance of a world that simultaneously hurls at us humour and tragedy,” Ross says. “His lines radiate magic and ease.”

Vermeersch describes McFadden as “a sorcerer of imagery” and says, “His writing bursts with awe and generosity.”

Those qualities also speak to the kind of man McFadden was outside the realm of poetry. The diagnosis of logopenic aphasia was most apparent in the change in McFadden’s personality, says his widow, Merlin Homer. “He couldn’t be glib. David was one to charm people. I think he felt the loss of social skills, so he withdrew from social settings.”

Following his diagnosis in 2012, McFadden recommitted himself wholeheartedly to his writing, determined to continue producing as long as the progression of his disease would allow him to do so. “I think what happened with him was he realized he had these unfinished projects,” says Homer. “And he just made up his mind to do them.”

“Even his doctors were amazed by what he accomplished in those years,” says Ross. “He completed his last poetry collection, Abnormal Brain Sonnets, in what seemed like the nick of time. A couple more months and I don’t think he could have done it.”

Homer attributes the poet’s late-career renaissance to a combination of internal drive and a vigorous exercise regimen prescribed by his neurologist, who had been given a research grant to study the effects of exercise on Alzheimer’s patients. “We bought a pair of rowing machines and put them in our basement,” Homer says. “We rowed. And we walked. We didn’t amble around like a cute old couple: we marched.”

The image speaks as much to McFadden’s strength and determination as to the exercise regimen he had been prescribed. “He had the most intense will,” says Homer. “And that also showed up in his dying. The will to live on his part was very extreme.”

That will to live was apparent in McFadden right to the end, even after his disease had robbed him of his ability to write (he was subsequently diagnosed with lymphoma in addition to the aphasia). At St. Anne’s Anglican Church in Toronto, where McFadden and Homer were regular fixtures, the congregation and officiants didn’t mind McFadden standing in the aisles, whistling and conducting the choir during services.

Homer remembers taking McFadden to a book club run by the church; one week the book under discussion was Abnormal Brain Sonnets. “There was this tremendous turn-out,” she says. Homer recalls the official launch of that collection; because McFadden’s disease had progressed so much that he was unable to read from his own book, others from the poetry community read in his place. At St. Anne’s, Homer suggested they do the same. “We went around this room full of people, each one reading. And David was half-doped on chemo. But he could really hear people reading those poems.”