Caring for Critters: One Year at  a Wildlife Rescue Centre 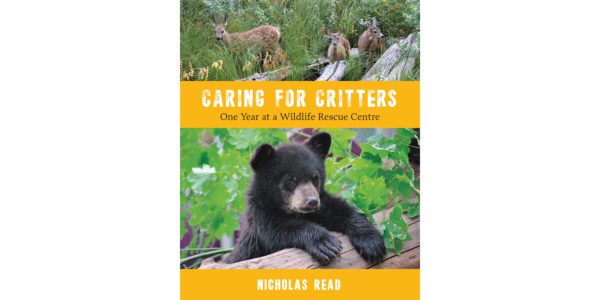 We are at a precarious crossroads in our relationships with the animals that surround us. Every week it seems there are news reports or viral videos catching “vicious” coyotes or bears hanging out in suburban neighbourhoods. Many petting zoos and marine parks – places that used to serve as de facto educational centres – are rightfully being scrutinized for ill treatment of animals under their care. Add to that the long lineage of nature documentaries and animated movies that rely on anthropomorphism to teach kids about animal behaviour, coupled with the sensationalism of personality-driven TV shows like Tiger King, it’s hard to know where to turn for objective information.

In his biography of Critter Care, a wildlife rehab centre in Langley, B.C., Nicholas Read makes his position clear upfront. He sets up the background to Gail Martin’s now five-acre animal rescue, which started in a spare bedroom, to help young readers understand the realities of caring for mammals such as raccoons, rabbits, coyotes, bears, deer, and beavers. Some will die as they’re released, he states, but most of these animals arrived at the centre because of human encroachment on their natural habitats.

It’s clear that Read is an avid fan of the rehab centre and its work. The book’s year-long diary format allows him to not only follow the progress of several animals in its care, such as Miss Dame the otter, but also drive home the reality that animal rescue is a full-time job. He states his issues with the Conservation Officer Service, a provincial government department that has legal rights to shoot and kill wildlife deemed a danger to residents. Calling out these conflicts in sidebars provides specific discussion on the balance between human and animal safety.

Large colour photographs of cute animals, like Miss Dame seemingly posing with a stuffed toy or a bear cub digging into a watermelon, will keep fledgling conservationists engaged in the narrative. Stories about Henry the squirrel (“renamed Henrietta upon closer inspection”), who was rescued after almost freezing to death, elicit a chuckle for the exposition that the rodent also has a bad attitude. These personal moments balance out the fact that animals that die at the rescue are cremated on the grounds, so “they’ll rest where their suffering ended.”

An uncharitable perspective on this book would be to call it an extended brochure to promote the work of the privately owned Critter Care. But the strength in Read’s immersive narrative, research, and observation-driven story will certainly lead young animal lovers, with some guidance, to think deeply about the ethical ways we can co-exist with our wild neighbours.