The Bushman’s Lair: On the Trail of  the Fugitive of the Shuswap 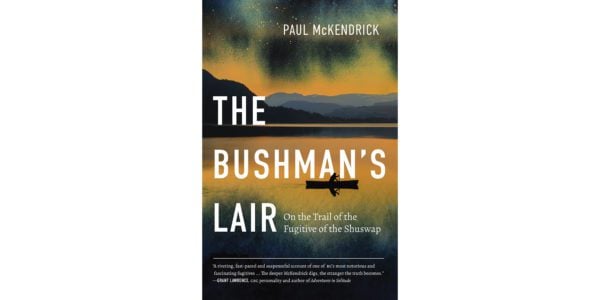 If Netflix is looking for a thriller with suspicious deaths, greed, gold, government corruption, a secret underground cave, and an eccentric lead character, it would do well to consider first-time author Paul McKendrick’s brisk and bracing tale.

The accidental discovery of the Bushman of the Shuswap’s elaborate cave – complete with electricity – in 2002 by a group of houseboaters on Shuswap Lake provides the starting point for The Bushman’s Lair. McKendrick pieces together the life of John Bjornstrom, the man behind a string of mysterious cabin break-ins that had cottagers in the B.C. Interior nervous, the RCMP befuddled, and Western Canada captivated two decades ago.

Born Nicholas Korody, the son of Hungarian refugees, Bjornstrom experienced severe neglect in his childhood and was adopted by a Norwegian couple; he grew up in Williams Lake, B.C. A restless soul, he tried his hand at many jobs, including a stint as a clairvoyant in the U.S. government’s Stargate Project, which investigated the potential for psychic phenomena in military intelligence. Eventually Bjornstrom hung out his shingle as a Calgary-based private investigator to earn a living with his “sixth sense.”

One of his clients was David Walsh, head of Bre-X Minerals, the Canadian mining company that fraudulently reported the discovery of a huge gold deposit in Indonesia, causing one of the largest stock market scandals in Canadian history. Bjornstrom claimed he was on the Indonesian government’s hit list for investigating the alleged suicide of Bre-X geologist Michael de Guzman and was roughed up by thugs at his Calgary office – his impetus to go into hiding in the bush.

For two years he lived off the land but also committed dozens of break-and-enters and extorted supplies from cabin owners. Bjornstrom also contacted media with claims that he’d discovered a number of bodies in the bush and purported to have evidence that kids were being sexually abused in the area. Bjornstrom did not shy away from the notoriety his actions and claims received; the RCMP posed as a documentary film crew to eventually capture the fugitive.

After serving a 23-month sentence on house arrest, Bjornstrom ran for mayor of Williams Lake in 2014. He died in 2018 of natural causes.

McKendrick, Bjornstrom’s lawyer, and even the retired RCMP officer who pursued him paint the Bushman of the Shuswap as an eccentric, sympathetic character, more drifter than grifter. Though the wilderness gave Bjornstrom comfort, his story is less a Thoreauvian pursuit of authentic living than that of a guileless individual trying to resolve his trauma, make connections, and help kids who were as vulnerable as he had been when he arrived in Canada.