The Lost Girls of Camp Forevermore 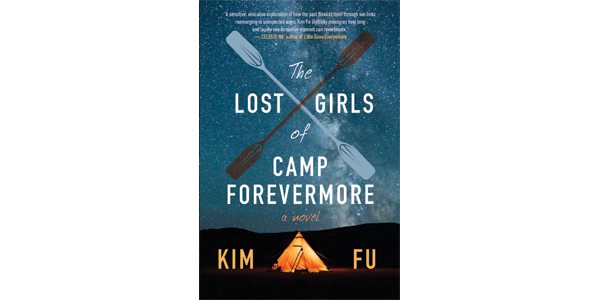 When Kim Fu’s debut novel, For Today I Am a Boy, appeared in 2014, it was met with acclaim and awards, as much for its story – about a transgender Chinese-Canadian boy named Peter fighting against his father’s expectations – as for the author’s exemplary writing. At the time, Fu (who was born in Vancouver but now resides in the U.S.) told Seattle Magazine that she has always felt more at ease with the masculine aspects of her own personality, even sometimes denying herself the pleasure of feminine pastimes or yearnings because they were at odds with her vision of herself. “It was easier for me to write from the perspective of men, or women with stereotypically male interests,” she said. “Peter is the most feminine character I’ve ever written.”

Perhaps in response to this, Fu commits fully to the female perspective in her sophomore novel, setting her story at an all-girls camp in the mid-1990s and focusing on a group of 10-to-11-year-olds. The novel’s five central characters, who come from varied backgrounds and ethnicities, act much as typical tween girls do. When they meet at Camp Forevermore they engage in posturing, judging, and the forming of quick alliances. But when an overnight trip to an island a half day away by kayak goes seriously wrong, allegiances shift, leaders emerge, and true personalities are revealed.

After an opening chapter establishing the cast and setting, the story toggles between scenes of the camping disaster and sections dedicated to each of the girls in turn. These latter chapters trace the paths of their lives (some before the camping trip, some after) and sketches in the context for their behaviour and a glimpse into the future. This provides a bit of a narrative hiccup. The central story is one of survival – the girls have limited food and water, no means of communication with the camp, their kayaks have come untethered and floated away, and they’re not on the island they were supposed to have landed on. Seeing so much of the girls’ lives play out in their individual sections defuses some of the intensity. As each girl’s extended story is revealed, we are reassured that she will survive her ordeal at camp.

And yet here’s where Fu gets clever, feeding readers just enough of the camping drama to lure us along to the revelation of the next girl’s fate. As the pages dwindle and we realize one character’s story has yet to be told, suspicion sets in as to how the narrative will end. But, once again, Fu subverts our expectations. The actual ending is somewhat anticlimactic, given where we think we’re heading, but ultimately more tragic, especially when considered alongside the trajectories we’ve already witnessed for each of the other girls.

Fu does a masterful job creating her characters. Each is distinct and fully formed, with backstories that resonate with realistic detail. Though much of what we know of the girls is doled out in their individual chapters, they are also brought into relief as a group in the scenes at camp. From the opening pages, for instance, 10-year-old Siobhan comes sharply into focus, by way of a description that also foreshadows coming events: “Siobhan wanted to be more like the heroines of the books she liked … tomboyish, scrappy, and resourceful, able to outsmart adults and survive without them, her body sun-browned and waiflike. She was, instead, a freckled, blue-eyed redhead, pale and dense as a block of shortening, who wasn’t allowed to use the stove.”

The combination of wryly humorous passages and those that undulate with poetry makes for a beautiful reading experience. Fu enjoys playing with her readers by dropping golden threads of insight into the narrative – threads that are easily missed if not paying close attention. In the chapter dedicated to Isabel, the quietest member of the group, Fu lays out a pattern of trios – deaths and lovers – in her life. The description of Isabel watching the boy who will become her first love onstage during a high school play (“She felt herself age, she felt the regrets she didn’t yet have”) could just as easily apply to the fear and hopelessness she experiences before her rescue, though with a much different emotional resonance.

Fu is adept at creating scenes that ratchet up the intensity and drama as well as those that delight by means of quiet devastation or depictions of joy. We feel for these characters, even in their worst moments, perhaps seeing ourselves in aspects of their personalities. Despite its outward appearance as a straighforward survival tale, The Lost Girls of Camp Forevermore is a thoroughly entertaining, complex novel full of intricate insights into human nature.