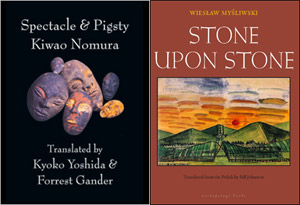 The winners of this year’s Best Translated Book Awards have been announced. The honours were presented May 4 at McNally Jackson Books in New York as part of the PEN World Voices Festival.

In the fiction category, the winning title is Stone Upon Stone (Archipelago Books) by Wieslaw MyÅ›liwski, translated from Polish by Bill Johnston.

Kiwao Nomura’s Spectacle & Pigsty won the poetry award. It was translated from Japanese by Kyoko Yoshida and Forrest Gander, and published by Omnidawn Publishing.

The winners were selected by a fiction jury consisting of 11 judges (including writers Susan Harris and Matthew Jakubowski), and a five-person poetry jury (including poets Brandon Holmquest and Erica Mena). Cash prizes of $10,000 (provided by Amazon) are awarded to each category to be distributed among the winning authors and translators.

The BTBAs, organized by Three Percent (an international literature group at the University of Rochester), is the only award that recognizes international works of translated literature published in the U.S. in the previous year.