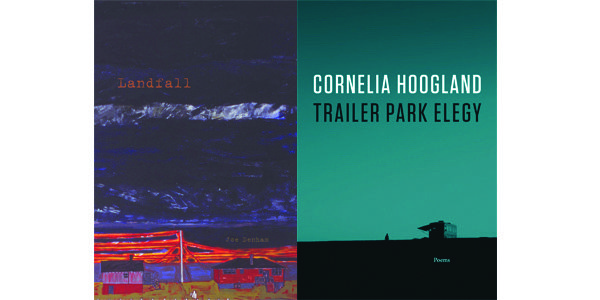 Thematically, Joe Denham’s fourth collection, Landfall, is a long question, a wrangle with the ontological realities of living at this time of degenerating species, and an interrogation of the meaning of otherness in an interconnected world. Like a Matryoshka doll, each consideration leads to a smaller consideration, until at the very core a reader discovers a figure similar to Kierkegaard, anguished and adrift: “Can we go then, without wilderness, within /windlessness, inside walls that won’t / let the world in?” Denham writes with his usual impeccable crafting of line and language, ringing with music and reminiscent of the modernist masters – that Eliot-esque first line, for example, mimicking the opening of “Prufrock.”

As with his earlier collections, Denham summons poetry to its highest calling as an elegant medium for profound expression. The words are the poet’s argument with the world. What are we when our gods have let us down? What are we when we are trapped in a universal ennui, “where it no longer matters your pleasure your panache your clever / wit and clarity. /Inside that gravity and levity we are all infinite, indefinite: less and / more. Infinitely.”  The third section breaks with the long poem style of the other three sections and offers readers prose-poem vignettes, but Denham continues to sharply observe life’s horrific absurdity.

Denham’s acute understanding of cultural narcissism as destroyer renders nothing sacred and everything profane. He rummages the coffers of the Greek gods, Shakespeare, the Bible, Leonard Cohen, and CanLit to contemplate a busted “moral currency” where we are both capable of and devoid of forethought, but wholly responsible for this continuous drama: “Pro-me / the us, unwound. Sure, the unkind / uncomely masses we are.” Denham’s latest is a mindful, carefully crafted book and an argument with the predicament of living. It certainly cements his reputation as master craftsman.

Cornelia Hoogland’s Trailer Park Elegy explores its narrator’s complex process of grief after losing her brother in a car accident. The poet opens in medias res, on a beach with a “dead” car (the reader hopes the car might become a metaphor or mean more than it actually does), then continues into poems rich with literal imagery. She introduces her brother, William, in the fourth poem, but with confusing syntax that prompts a reader to fight with the poem instead of focusing on the subject: “Mt. Baker’s snow-summit – afloat in a cumulous sea – will sometimes / present its shining self. But the gift was breath – he didn’t know / his own would make his cry.” The grammatical constructs here are puzzling. His own gift would make his cry? His own breath would make him cry? Moments like these are more frequent than is warranted, and serve only to interrupt the flow of the work and throw off the mood.

Poetry of consequence requires an abundance of caution with word choice, placement, and grammatical convention. A few times, Hoogland plays it a bit too fast and loose, which removes the reader from the intended sensation of grief. It is when the narration moves closest to William that we encounter the best aspects of Hoogland’s elegy:

Eric – the man who stopped at the side of
the highway

where my brother lay dying – peered
into the dim truck cab.

I’ll get you out, said Eric. Help is on the way.

This close-up narrative gives us true insight into William’s character while providing an echoing silence that mimics his absence. Another example of this is the way Hoogland deals with the silence that creeps over the accident scene:

In the shearing,
the settling –
noise became imperceptible;
a lower frequency;
the vibration, really, of shadow
expanding

on a solitary highway that yawned
open fields where

woods began –
and the woods

emptied on a solitary highway
expanding

Through memory and fragment, Hoogland builds a portrait of her brother’s life and last moments. She braids timelines between her own past and present and shifts between her own narrative and that of William. Despite some technical infelicities, it is easy to empathize with her subject matter – those taken from us tragically and too early.