Mistakes to Run With 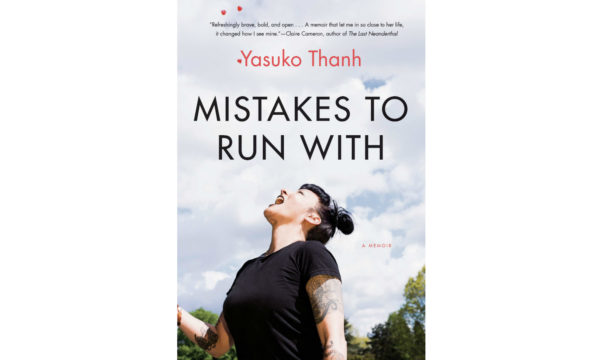 In the first two pages of her new memoir, Yasuko Thanh delivers a fully formed portrait of an adolescence lived in a world of sheer contrasts. By the time she is 12 years old, Thanh has won a French public-speaking competition and her academic and athletic achievements have been made the subject of an article in a local newspaper. But within a scant couple of years, she’s “performing half-and-halfs on the street that cost two hundred bucks, half blow job, half lay.”

Thanh’s vivid, honest voice moves us fluidly through her childhood (during which she journaled and rearranged her possessions until they “felt right”) to a tumultuous adolescence characterized by the need to dissociate in order to survive. She creates an alter ego as a defence mechanism: “Being hurt at the hands of a loved one was not an option for my alter ego,” Thanh writes. “While I may have curled into a ball and cried, my alter ego did not, simply by refusing to look at her injuries.” Her meditations on the nature of love – their ability to convince even a skeptical reader of the “bonding that occurs between aggressor and victim” – speak to gendered questions about what it means to care for someone when doing so interferes with caring for yourself.

During her years as a sex worker – vulnerable to violence and constantly under threat of poverty – Thanh learns how to live in an environment in which cash cannot prevent her closest friends’ deaths from violence or disease. She also examines the dangers of a ravenous appetite for approval and acceptance. Whether earning top marks or justifying self-destruction under the guise of a pursuit of freedom, the pressure to earn love – and the belief that it’s never freely given – form some of the most devastating parts of this memoir.

Though the depictions of Thanh’s relationships with men – often emotionally abusive – are visceral enough to induce physical discomfort, her development as a writer, which appears concurrently, acts as a healing balm for both author and reader. It is her love of lists, journals, and short stories that seems to hold this resilient, determined person together, creating a cocoon of selfhood in situations where no external markers of stability can thrive. The prose here is alive in ways that are both difficult and emotionally accessible.