★Nothing Will Save Your Life 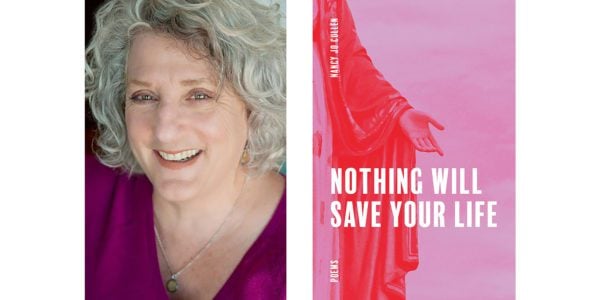 Two new books from seasoned poets Nancy Jo Cullen and Alexandra Oliver share thematic and stylistic territory, turning their attention to family and community dynamics, sexism, and the domestic sphere in poems that make frequent use of rhyming, repetition, and traditional forms.

Cullen’s fourth full-length poetry collection Nothing Will Save Your Life follows its speaker through a series of observational lyrics about aging, climate change, childhood, mothering, and other intimate relationships. In several poems, the author examines day-to-day interactions between daughters and mothers, finding in this connection a source of lessons about gendered norms: “We told our daughters, do not walk through that park; we said / You are a public space & it will not soon end.” This mix of resignation with a consistent verve, or even resistance, is at the heart of Cullen’s collection. “Perhaps it’s the flu or, perhaps, fury,” suggests the speaker of “Due,” a woman who finds herself “[w]earied by The Patriarchy’s patriarchs.”

Cullen’s references run the gamut from classic literature to pop culture, the speaker focusing on the ordering and repressive forces of religion, capitalism, sexism, and the nuclear family. “When I Was Young I’d Listen to the Radio” considers the speaker’s experience of gendered expectations as modelled by the late Karen Carpenter: “When Karen Carpenter died I didn’t think of all my failed cucumber diets / I thought about the problem of the habit of obedience.” Here, as elsewhere, Cullen uses irony and humour to undercut the received notions forced upon women. The speaker finds occasional respite from these expectations in love and family, and in the contemplation of nature: “I no longer believe in Jesus or in his Father. I don’t pray; I try not to wish. But I am held in awe by the Semipalmated Sandpiper.”

Hail, The Invisible Watchman, Alexandra Oliver’s third poetry collection, comprises three poetic sequences. The first of these, “The Haunting of Sherbet Lake,” is a series of narrative poems that expose the unsettling and uncanny world of a suburban neighbourhood – “That Etch A Sketch of wealth and same and sorrow.” In delightful (and, again, unsettling) contrast to the hypocritical and rapacious motivations of the characters depicted, the poems in this sequence are rendered in taut, galloping lines that propel the reader through the text.

Quick to mock social pretensions and composed in a tone that is both cheeky and urbane, Oliver’s poetry evokes canonical satirists including Juvenal, Paul Scarron, and Alexander Pope. Many of Oliver’s satirical targets recall the subjects considered in Cullen’s collection; Oliver takes aim at prejudice and jingoism; elsewhere she takes up sexism, violence, and boredom in the nuclear family. “The Last Straw of the Last Duchess” responds to Browning’s famous poem in the voice of the Last Duchess herself, a woman belittled and dismissed (perhaps even killed) by her husband in the original poem. In Oliver’s rewriting, this female figure adopts a tone of defiance: “I’m his last duchess, hanging on the wall, / though as to why, I know sweet bugger all.” Unlike Cullen, Oliver tends to favour narrative or persona poems over a more confessional, lyric expression; the result is a cooler, detached perspective and a greater sense of distance between speaker and poet, though the occasional bittersweet moment slips through.

“The Haunting of Sherbet Lake” is followed by “The Blood of the Jaggers,” a tragic play in verse (whose brilliant epilogue ends on one of those bittersweet moments), replete with a list of dramatis personae. “Clever Little Dragon: On Hetty Dorval,” the final section, is a reconsideration of a lesser-known Ethel Wilson novel. In the book’s notes, Oliver suggests Hetty Dorval is “much misunderstood (and underrated),” and calls it “the great unsung Canadian horror novel.” This last sequence, a series of English sonnets spoken in the voices of two of Wilson’s characters as well as a third-person narrator, is particularly well realized. Oliver proves herself a master at her chosen form; the sonnet and its demanding rhyme scheme serve as a springboard for the narrative moments and reflections she depicts.

In addition to their shared interest in sonnets, Oliver and Cullen frequently turn to repetition and rhyme in poems that do not adhere to traditional forms. While Cullen’s intermittent use of rhyme and repetition is not particularly surprising, Oliver displays a fidelity to rhyming verse not often found in contemporary Canadian poetry. The formal aspects of Oliver’s writing do not detract from, but rather enable her quick wit and clear-eyed assessments.

Besides the odd piece like “Current Mood,” a meditative poem adeptly rendered as a traditional English sonnet, Cullen tends toward more formal experimentation with free verse and prose poems. The most formally adventurous poem in the book, “Consolation,” punctuates its stanzas with traditional musical notation. But even in poems roughly structured around her chosen forms, Cullen often allows herself room to roam. She pushes the limits of the poetic breath, for example, in “TBH,” an unrhymed sonnet corona (one of two in the book; the other shares the collection’s title) composed in irregular lines that often surpass the limits of iambic pentameter and eschew punctuation.

There is a similar sense of heat, a palpable tension – formal, narrative, and emotional – in both Nothing Will Save Your Life and Hail, the Invisible Watchman. Ranging in voice and register, these collections are vibrant and confident, attuned to the absurdities, hypocrisies, horrors, and beauties of everyday life.