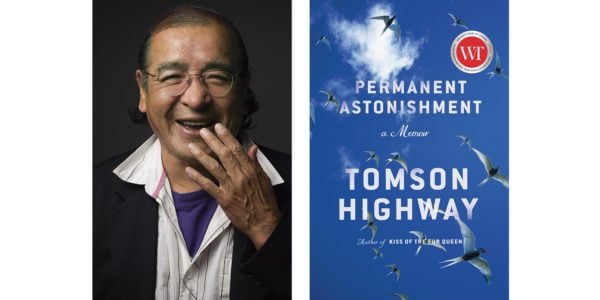 The winner of the Hilary Weston Writers’ Trust Prize for Nonfiction, Permanent Astonishment is playwright and novelist Tomson Highway’s brilliant, funny, beautiful account of his childhood in both Canada’s remote North and at the Guy Hill Residential School near The Pas, Manitoba. The book’s epigraph is a quote from Highway’s brother René: “Don’t mourn me, be joyful.” It is a dictum Highway seems to have observed in both writing this book and in the life it recounts.

Permanent Astonishment begins with Highway’s birth, as told by his family. The 11th of 12 children, Highway arrives two weeks early while his family is en route from hunting grounds 150 miles from Brochet, “the village that serves them as home base but home base only for they are almost always out on ‘the land.’” On a remote island, Highway is born in a snowbank after his sister Louise travels two miles in a blizzard – at night – to fetch a midwife, but not before she encounters a vision of “her five late siblings, in order of age” and an unborn sixth figure that “hangs there naked in fetal position, unattached to solidity, and transparent.” It is a night of miracles and magic, underscored by tragedy and loss.

With its sly humour, generosity of spirit, and awareness of community both corporeal and spectral, this section sets the tone for a touching account of a world that few can imagine. In a landscape without roads, Highway’s early years seem to exist outside of time, a life of hunting and fishing, near tragedies and harsh losses, laughter and singing.

Highway’s family is eager to send him to school. His father, aware that “his world is on the cusp of leaping five generations in one,” seeks the best for his children in that transition. Highway blossoms at school, attaining high marks in English, learning piano and Latin. This schooling allows him to attend high school, then university, and to write the plays and fiction that have made him an icon. He thanks the staff of the school in the book’s acknowledgements and, “even more profound,” he thanks his fellow students, “whom I love to this day with all my heart and will forever.”

Highway doesn’t flinch from the school’s horrors, though. One chapter follows his abuse, and the abuse of boys in his dormitory, at the hands of a brother: “The men these boys grow into have nightmares. For life. … Their lives are destroyed. And they think about it and think about it and think about it. Sometimes to make the thinking stop, they kill themselves.” Most crucially, he writes, “From what I understand, that is their experience. And one day, I hope they write about it because I can’t. And to those who can’t, I have tried my best to write this story of survival for you.”

Permanent Astonishment is a stirring, powerful account of finding joy on the upper side of hardship and beauty in both darkness and light. Recounted in musical English prose inflected with Cree words and concepts, it’s a vision of a vanished world and a keen insight into one of Canada’s most important writers.