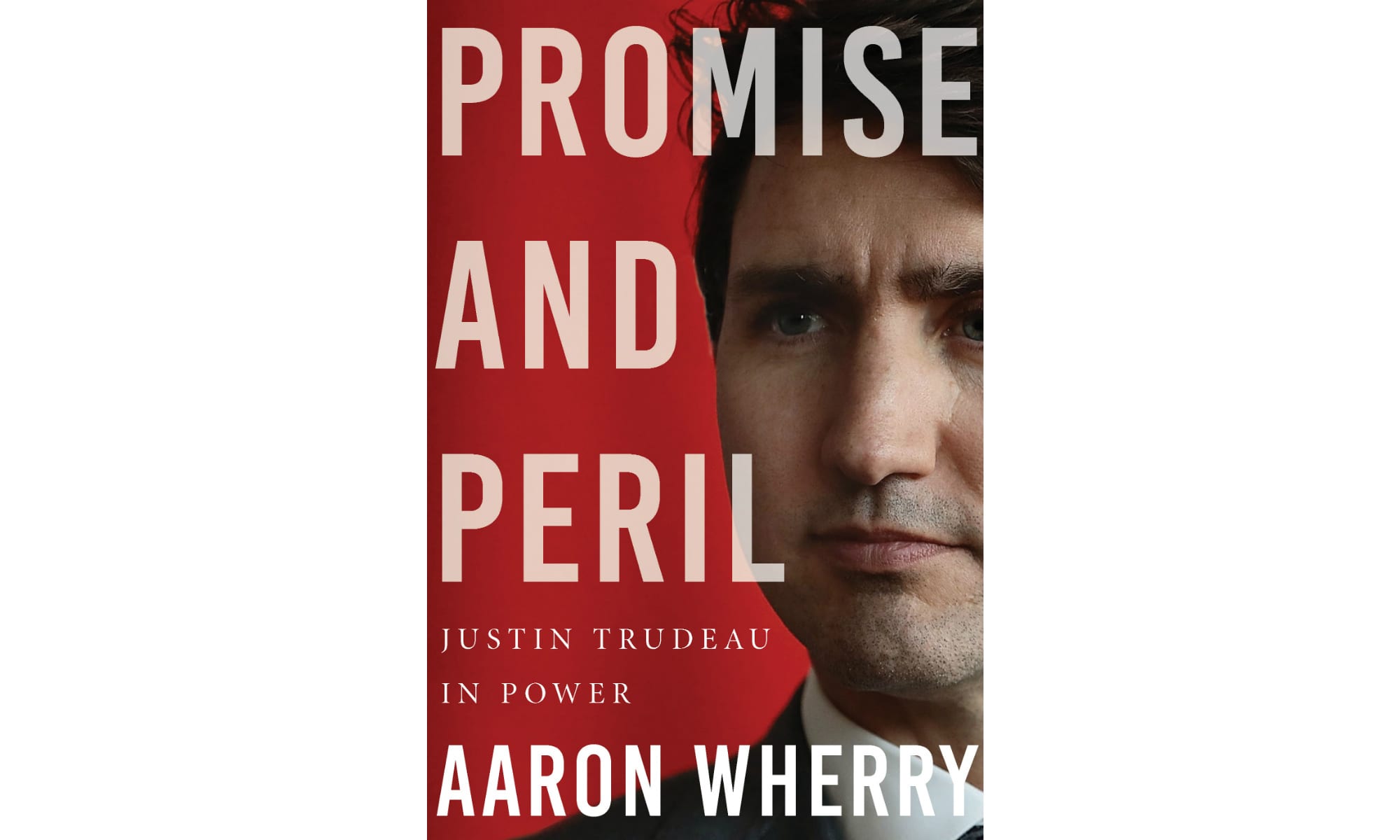 In the future, semioticians and media literacy professors will no doubt expend much time and energy deconstructing the way photo editors choose to present images of Justin Trudeau. In the honeymoon period following his accession to prime minister, the Liberal leader was most frequently shown beaming a toothsome smile in selfies with constituents or cutting a dashing figure in official photo ops. On a trip to India in 2018, Trudeau was photographed mawkishly dressed in full Indian garb alongside Bollywood actor Rukh Khan, himself demurely attired in a plain black suit. In the wake of the SNC-Lavalin affair, photos of the PM have been largely unflattering; one Canadian Press photo by Fred Chartrand from early March 2019 shows Trudeau frowning, eyes downcast, and sporting a prominent double chin.

The image on the front jacket of CBC senior writer Aaron Wherry’s new book on Trudeau’s first term in power depicts the prime minister looking serious, almost stern, his blue eyes gazing past the camera, and a furrow at his brow. He appears in extreme close-up, such that the observer can practically count the number of pores on his cheek and forehead. The image is noteworthy, not just because Trudeau has fashioned himself – consciously or otherwise – as the first Instagram PM, but because it anticipates the focus and detail Wherry marshals in his almost forensic examination of the last four years of Liberal government. “From up close,” Wherry writes, “one can see the blemishes and wrinkles.”

Though Wherry is generally approving of Trudeau’s accomplishments during his time in power, he is also unafraid to expose those blemishes and wrinkles to careful scrutiny. He begins his account on the night of Feb. 27, 2019, with Trudeau returning to his high school alma mater to celebrate a recent by-election victory. That celebration was cut short by the need to respond to the appearance earlier in the day of Jody Wilson-Raybould, who was testifying before the House of Commons justice committee about her version of events in the SNC-Lavalin affair.

Opening with SNC-Lavalin is a bold choice, given that it represents the greatest existential crisis Trudeau’s Liberals – not to mention the man himself – have faced since winning their majority. Wherry circles back to it in his penultimate chapter, which provides a blow-by-blow recounting of how events unfolded following the publication, on Feb. 7, 2019, of Robert Fife’s exposé in The Globe and Mail. Once he has presented all the evidence on both sides, Wherry comes to the unavoidable resolution: “Even the friendliest analysis would have to conclude that something went wrong here.”

If SNC-Lavalin is the spectre that hovers over Promise and Peril, the balance of the book is a nuanced and fair-minded assessment of a government that has broken some promises – on election reform and deficit reduction – while also making some undeniable strides in other areas. Among other things, Trudeau’s Liberals explicitly identified gender identity as a prohibited class of discrimination under the Canadian Human Rights Act; expanded the number of safe injection sites across the country to address the opioid crisis; welcomed 25,000 Syrian refugees in the wake of the 2015 migration crisis; and successfully renegotiated NAFTA (Wherry gives most of the credit here to minister of foreign affairs Chrystia Freeland, who comes off as one of the book’s unvarnished heroes).

On the subject of Indigenous rights, which Trudeau claims to be closest to his heart, Wherry also points to successes: “The annual budget for Indigenous services and programs is currently set to increase from $11.4 billion in 2014–16 to $17.1 billion in 2021–22, including new money for education and housing. Eighty-two Indigenous communities have signed new ten-year funding commitments. Between November 2015 and April 27, 2019, eighty-five long-term drinking water advisories for Indigenous communities have been lifted.” Even Wilson-Raybould, who has become a Trudeau antagonist, gives the Liberal government credit in this area, while also admitting there is much work still to be done. “There has been a significant amount of money invested in Indigenous communities, there’s been significant work to address the day-to-day issues that Indigenous peoples face,” Wilson-Raybould is quoted as saying. “And that’s really important and nobody should take that away from the government.”

If there has been pushback from Indigenous communities and others on issues such as energy development and the controversial purchase of the Keystone XL pipeline, Wherry points out that the competing values and interests of a disparate and multicultural country like Canada are bound to cause any government problems and that the Liberals have done at least a fair job of navigating these choppy waters. Trudeau has acquitted himself especially well, in Wherry’s view, in dealing with the interloper who currently occupies the U.S. White House, deploying a combination of charm and steely resolve and knowing when to push back in speeches or on social media.

It helps that Wherry has access to numerous players in this ongoing drama: he quotes extensively from interviews with Trudeau himself, along with former ambassador to the U.S. David MacNaughton, Freeland, Wilson-Raybould, and others. These first-hand accounts shed light on the thought processes and imperatives of the various figures and provide deeper understanding of the reasoning and impetus for decisions and policies than a brief scan of newspaper headlines or online coverage might otherwise allow.

The narrative that Wherry unfolds is unfinished, and has even progressed since the book went to print. SNC-Lavalin is back in the news following the ethics commissioner’s report stating Trudeau broke conflict-of-interest rules, and Conservative leader Andrew Scheer has renewed his call for an RCMP investigation. Whether the Liberals will survive to form another government is unclear, and the official campaign has yet to begin. But anyone looking for context as to how we got to this point could do worse than consult Wherry’s comprehensive, thoughtful, and even-handed book.