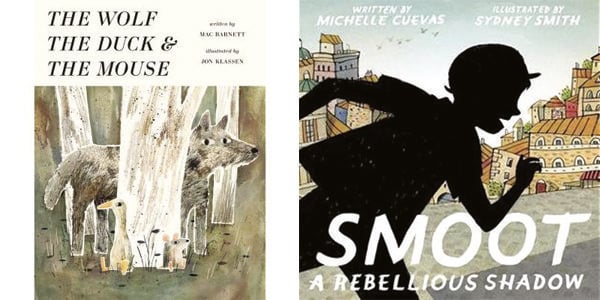 Expectations are high for Canadian illustrators Jon Klassen and Sydney Smith. Both won Governor General’s Literary Awards for their first picture books, have appeared multiple times on the New York Times bestseller lists, and are widely considered to be in the top tier of picture-book artists working today. With their latest, they each take on the challenge of illustrating plots that dip into absurdity with characters that end up in very unexpected, almost unimaginable situations.

The Wolf, the Duck, and the Mouse is Klassen’s fourth collaboration with U.S. writer Mac Barnett, who has chosen a fairly uncommon setting for his story – an animal’s stomach. The story opens with a wolf eating a mouse. Readers don’t see the actual consumption, although that is the book’s only instance of off-camera action. Inside the belly of the wolf, the (still intact) mouse meets a (still intact) duck, who has set up a quaint little residence. Chez Wolf’s Belly has a record player, table, four-burner stove, colander, and much more. When a hunter sets his sights on the wolf, all three characters find themselves in grave danger.

A story that takes place in a stomach brings to mind the classic Magic School Bus books and television series, which also portrayed trips through various organs. But Klassen does not get as anatomical with his illustrations; instead, the wolf’s belly is a dark, nondescript cave. This isn’t a cop-out, but a reflection of the story’s classic fable structure.

Barnett has written a text that is part origin tale, similar to Rudyard Kipling’s Just So Stories, and part hipster The Wind in the Willows. Klassen works with the story’s silliness (the duck calls for the wolf to swallow a “flagon of wine” and some “beeswax candles”) by playing it straight, drawing almost exactly what the text demands in classic tableaux. The subtle comic liberties he does take, such as arming the mouse with a hockey stick and outfitting the duck with the colander as a hat, aren’t overwhelming. They put the fable first and the farce second, which ends up being the wittier choice.

Like Klassen, Smith faces a plot with a high degree of difficulty. In Smoot: A Rebellious Shadow, a placid, predictable boy has a fun-loving shadow named Smoot that feels stifled by the boring life of his owner. One day, Smoot breaks away from his human to experience all the fun and adventure he craves. But there’s a problem: Smoot’s actions inspire a rebellion, causing the shadows of many things – including plants and rocks – to abandon their keepers. Smoot sees the damage he’s caused and sets out to make it right.

Smith’s shadows are vibrant and striking when juxtaposed with the real-world setting. The lines and colours in the non-shadow world are lithe and angled; the cityscapes are especially impressive and rich with tactile details in all the surfaces of stone, brick, and wood. By contrast, Smith’s shadow pictures appear hasty, spontaneous, and joyful. In one particularly dramatic image, the shadow of a lowly dragonfly appears as a ferocious dragon towering above the town. In another, two insects that dream of being musicians have giant shadows that frenetically play a trumpet and violin.

Klassen and Smith’s latest endeavours succeed because they give their readers exhilarating portraits of subjects and locations unfamiliar, generously and skilfully interpreting the oddest and most hard-to-imagine bits of the stories they illustrate. The bar is high for these two, and they continue to soar over it.