The Best Canadian Poetry in English 2018 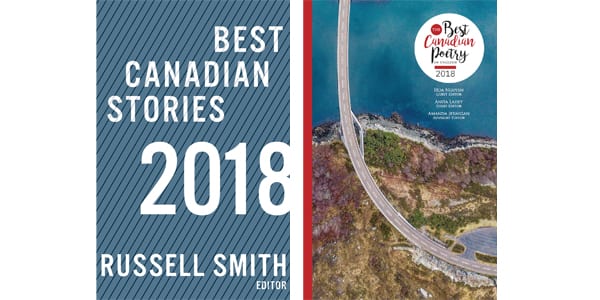 Editing a collection that comprises the best of anything must be partially an exercise in frustration. Selections somewhat depend on moods on particular days and, in the case of Canadian short fiction and poetry, there’s so much to choose from. But for readers such collections can be a pure joy – we benefit from the editors’ hard work and curatorial acumen. Best Canadian Stories 2018 and The Best Canadian Poetry in English 2018 are both fine examples of their respective genres. Guest editors Russell Smith and Hoa Nguyen have packed each volume with such a range of material that every reader is sure to find something that forces its way into the heart.

The 16 stories chosen by Smith include entries by established writers – Lynn Coady, Bill Gaston, Lisa Moore – as well as writers who are just starting out or deserve to be better known. It’s a splendid collection. A standout is David Huebert’s “Six Six Two Fifty.” The title refers to the size of the main character, a hockey enforcer named Wes, who is riddled with guilt for having left his wife and child. Wes would rather just play the game, but he knows his job is to fight. In his introduction, Smith calls Wes a “violent loser,” but he’s not just that. He truly wants to resist the violence that is turning him into a man he loathes.

Stephen Marche’s “Twinkle, Twinkle” comes at the creative process from a completely different angle. It’s a sci-fi “algostory” – a work of fiction that is algorithmically generated. As an experiment it’s fascinating, but the explanatory footnotes are even more intriguing than the story. As one note reads, “The fact that it’s really not that bad is remarkable.” Elsewhere, “Inches” – one of the linked stories in Kathy Page’s recent book, Dear Evelyn – has a stunning sense of time and place.

Nguyen’s Best Canadian Poetry in English 2018 contains 50 poems. The two that immediately jump out are Nancy Jo Cullen’s “TBH” and Billy-Ray Belcourt’s “Love Is a Moontime Teaching.” The former is a series of seven sonnets in which the last line of one becomes the first of the next; the latter also uses the technique of repetition to link the lines. Both poems deal with the body, the body politic, and loss. Cullen writes, “The body keeps the score, our long history of anxiety / In the province of ongoing extirpation,” while Belcourt notes, “lonely is a movie called taxi zum klo about white gay men who risk tiptoeing through desire’s / minefields for ten minutes of something better than living.” Both poems radiate pain and also pay homage to the mitigating effect of language.

Another poem by an Indigenous writer, Waaseyaa’sin Christine Sy’s “my umbilical cord, map trail seasonal camp: a poetics of work,” delves into the question of identity in a manifesto of one person’s search for connection. It includes searing lines – “tell us the pain of be(com)ing indigenous”; “speak/do from a place of hard earned western + anishinaabe education, ancestral intellect drawn from my anishinaabe mother and my white father, and self-respect” – in a blend of poetry and prose poetry.

Yusuf Saadi’s “Belittle” explores the connections we make with words. The speaker of the poem asserts, “If a word is tainted with story / language will always be a crooked bridge.” This is debatable, at least insofar as “crooked” would suggest negative connotations, but the language of poetry undoubtedly works by evoking feelings and ideas about which the user may be unaware. Saadi’s poem pushes readers to think about the power – both good and bad – of language.

Each collection includes an introduction, biographical notes on the authors, and a list of originating publications. Smith discusses recent events that have had a popular impact on the short-story form, such as the reception of the New Yorker story “Cat Person,” which went viral at the end of last year. Many people mistakenly thought it was a confessional essay and accused the author, Kristen Roupenian, of moral failing on that basis. Smith points out that fiction has a distinct role: “When an entire intellectual culture is immersed in the didactic, it loses its ability to see that which is not didactic. Art has a role that polemic does not. There is a value to being removed from one’s ideological position for a moment of escape into the nearly real.” Nguyen tilts toward something similar in her introduction: “My hope is that these poems gather polyphonic threads of potency, challenge, play, understanding, and awareness. My hope is that, like the poems here, poetry gives shape to what can be imagined and reimagined, engaging us in occasional shifts of perspective.”

Both editors have done a splendid job. Fans of the series will be pleased and new readers who pick up these latest collections are sure to become fans.