Us, Now: Stories from the Quilted Collective 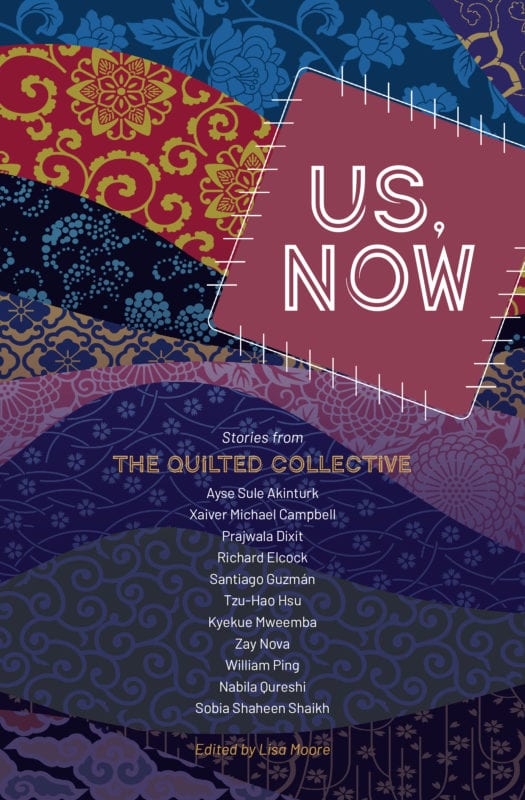 In the anthology Changing the Face of Canadian Literature (Guernica Editions), editor Dane Swan discusses the diversity and breadth of Canadian literature, writing in the preface: “Congratulations Canada, you finally have a literature that looks like the people who inhabit you. Do not take this moment for granted.” It’s refreshing to see two new anthologies continue this work of collecting and curating literature that has historically been sidelined in favour of work from publishing centres. Feel Ways: A Scarborough Anthology and Us, Now: Stories from the Quilted Collective provide an expansive body of literary works from writers in Scarborough and Newfoundland, respectively.

Edited by Adrian De Leon, Téa Mutonji, and Natasha Ramoutar, Feel Ways is the first anthology to feature nonfiction, poetry, and fiction exclusively by Scarborough writers. While much of Southern Ontario’s literature is associated with Toronto, this collection affirms a vibrant movement occurring within Scarborough. As co-editor De Leon puts it, “the ‘rest of Toronto’ may appear, if it ever does, in these pieces, but contributors have taken upon themselves the task of shaping a literary world without needing to be east of the centre of a city.”

De Leon writes in the introduction that “this collection is the culmination of years of audacity and community love, dreaming a literary genealogy in which we saw a place for ourselves and our families who watched those balloons, like our neighbourhoods, rise and fall and rise again.”

Although Feel Ways is anchored in a specific place, the collection’s opening nonfiction work, “Queer Earth: End of the World Erotics” by Shaina Agbayani, proclaims: “I refuse to make nationalism out of traumas, territorial attachments out of violence. Scarborough is as ethereal as she is material.” The breadth of works in this anthology speaks to this ethereality.

Poems by Sarah Hilton and Chris Johnson give a glimpse of growing up in Scarborough and aching to leave the city, while Victoria Mbabazi writes about belonging at the University of Toronto’s Scarborough campus in her poem “Scarborough (place/space).” Experiences are contradictory and this opposition is necessary to present the plurality of the city. Kit Hornby’s short story “All You Are Is Filled with Hot Air” features the hot-air balloons at Scarborough Town Centre, which became a landmark and whose absence was palpable when they were removed. “Bad things happened before the balloons were here. They happened while they were up, and they keep happening after they’re down,” writes Hornby, speaking to the ways we ascribe meaning and significance to landmarks that are, like everything on all unceded land, impermanent.

Us, Now editor Lisa Moore describes how the anthology “began in a six-week creative writing workshop whose participants would form the racialized group of writers called The Quilted Collective.” The anthology features short stories by immigrant writers in Newfoundland, localizing the stories within a specific place to offer perspectives on immigrant life in Canada out-side its big cities.

Nabila Qureshi’s lyrical story “At the Stroke of Midnight” takes the form of a letter from the speaker, Khadija, to herself. Qureshi provides evocative descriptions as Khadija stays up at night recounting memories: “Take my hand. I am always with you, from the waxing and waning of the moon and back. These feet have walked a thousand miles. These feet will walk a thousand more.” In “Prayer,” Xaiver Michael Campbell writes achingly of adolescent queer desire. The story’s narrator expresses his crush on his friend, Kareem: “And each weekend, I waited eagerly for us to fall asleep, hoping and praying one night we would fall asleep face to face, wake up face to face, and realize we were safe, we were seen, we were enough. Praying this would be the time he would reach out and kiss me.”

In addition to the breadth of content, the engrossing stories offer stylistic variations that further speak to the diversity of literature being written – from the spatial play of Prajwala Dixit’s “Ondu Nenapu” to the second-person narrators of Sobia Shaheen Shaikh’s “Softly, with Niyyat” and Kyekue Mweemba’s “This Town.” “Softly, with Niyyat” chronicles leaving an abusive relationship, a necessary act for the narrator; the story takes the reader on the difficult emotional and social journey of disentangling oneself from such a situation.

By presenting a diversity of stories and experiences from writers who have moved into, out of, and through Scarborough and Newfoundland, Feel Ways and Us, Now capture the plurality of these places.