Two years ago, Adriana Barton found an old box in her garage that contained the forgotten ephemera of her childhood. Inside were straight-A report cards from the gifted program Barton attended. There were photos showing an elfin, dark-haired girl clasping cello performance trophies. And there were diaries filled with Barton’s anxious scribblings that she might be falling short of the wunderkind image she projected to the world. Together, the contents “showed me the extreme cost of perfectionism,” Barton says from her home in Vancouver, where she wrote Wired for Music: A Search for Health and Joy through the Science of Sound (published this month by Greystone Books), a nonfiction work that she describes as a hybrid of “science and story, head and heart.”

Barton’s perfectionism was seeded at age five when she began to study classical cello at the Conservatoire de musique du Québec à Hull under André Mignault, who demanded flawless playing. Eventually, Barton grew to hate her gruelling taskmaster. Technical perfection might be achievable, but where was the joy? A diary entry written when she was 12 reads “I want to be good, but most of all I want to have pleasure playing the cello.” 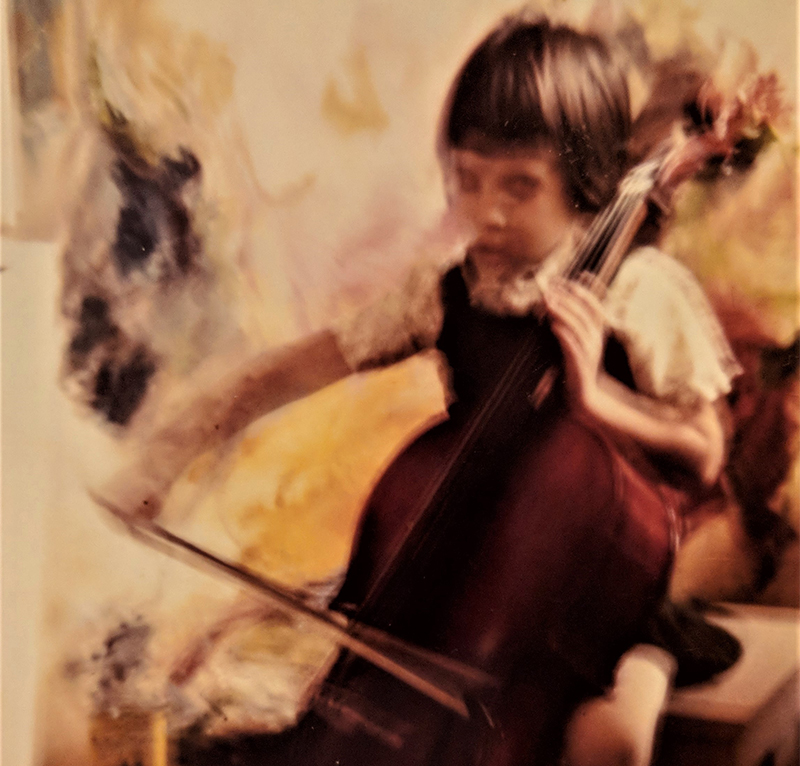 Adriana Barton practising in front of one of her mom’s paintings, months after beginning cello studies at age five. (photo courtesy of Adriana Barton)

Barton became exemplary. “I wanted to be known for talent as a musician.” Pleasure became tangential. At 16, she was accepted into the prestigious Cleveland Institute of Music, a place that drew Juilliard School grads. Eventually, Barton would play Carnegie Hall. But the hours of practice took a toll and she developed performance injuries, including forearms swollen from tendinitis and ganglion cysts in each wrist, making it impossible to play. Music became a physical as well as a mental anguish. It felt like failure.

At 22, Barton quit the cello. It was, she writes, like burying her twin. “Without the cello, who was I?” But leaving the instrument behind freed Barton to embark upon a musical odyssey. Along the way, she found joy, exploring the rhythms and melodies of various cultures and peoples for whom music is a spontaneous part of everyday life and imperfection is something to be embraced. It also led to Wired for Music – a project that Barton says “chose me.”

Barton hadn’t intended to write a book. She had been working as a health reporter, and wrote about aging, cancer care, mental health, and emerging therapies for the Globe and Mail. In 2016, after years at the Globe and ready for a new challenge, she was accepted into the ethnomusicology PhD program at the University of British Columbia. But a PhD can be cloistering, and, as a journalist, Barton was “used to my ideas getting out in the world.” She opted out of graduate studies, attended a Brazilian music camp, and, upon her return, was approached by Greystone Books to pen a nonfiction work. The final artful blend of science and memoir was a struggle, Barton admits, and the book underwent several permutations before publication.

Wired for Music showcases her journalistic skill, presenting an exhaustively researched exploration of science’s latest discoveries about the role music plays in thought, trauma healing, motor control, language, high-performance athletics, social bonding, and politics. This erudite study is interwoven with Barton’s achingly honest and inspirational quest to determine how music could enrich her life, spirit, and soul. Her journey is meant to encourage those of us who feel too insecure to sing, dance, or play an instrument because we aren’t Beyoncé, Baryshnikov, or Yo-Yo Ma. “I want people to feel that music is inside of them, that it’s an integral part of their humanity and physiology in ways that maybe they don’t fully understand,” Barton says. Warbling off-key, as most of us do, simply adds to “the musical texture.”

Barton explored world music, especially the rhythms, beats, and melodies of South America and Africa. In 2019, her peregrinations led her to such places as the village of Ubuntu in Zimbabwe, where she explored how central music can be to the culture and spiritual beliefs of a community – a thread connecting past and present. For these villagers, the Shona people, music was “a force of nature, essential to life.” The musical instrument that facilitated Barton’s understanding of how integral music is to who we are as humans was the mbira, a sacred percussion instrument made of staggered metal tines attached to a wooden board that is believed to connect the ancestral spirits with the living. The mbira is played by plucking the metal keys to create a wide range of melodic notes, including bass and bell tones. The instrument can growl, bellow, weep, or tinkle like rain. Barton was invited to communicate with an ancestor in a possession ceremony. At first tongue-tied by the notion of communing with spirits, Barton soon found her words tumbling out: “My body is tight, my mind is tight. Constricted. I don’t know what to do about it. I’ve tried so many things.” The pain she was experiencing, the medium communicated to her, was inherited pain and grief from her own ancestors. “It was comforting to be in a culture that viewed the individual as just part of a long lineage of previous experiences,” Barton says. “[It doesn’t matter] whether you think of that as a metaphor or a phenomenon that is real in the way they experience it.”

What does matter, Barton says, is that we recognize the key role that music plays in our lives while embracing and valuing the panoply of musical traditions – ancient or modern – as much as we revere the Goldberg Variations. “I want people to feel that they can participate in music at any level, and on their own terms.”