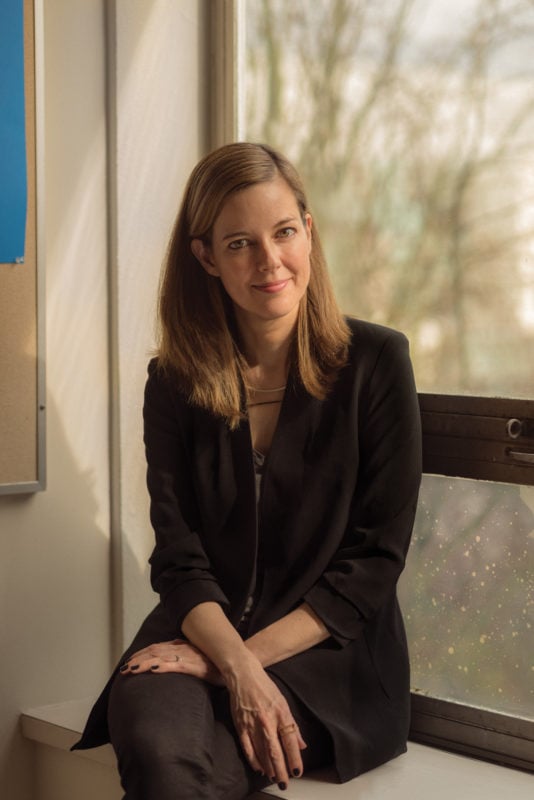 Alix Ohlin stands in front of a classroom so generic it could at first appear to be anywhere. But then a large seagull swoops by the picture window. Outside, past the nondescript buildings and just beyond the treeline at the edge of campus, there’s a glimpse of Vancouver’s mountains and ocean.

Chair of creative writing at the University of British Columbia, Ohlin knows everyone by name in this master class on crafting sentences. The exchange between the students and faculty in attendance flows freely. The room is riveted by the rhythm, elegance, and juxtaposition of words as Ohlin quotes passages by Ottessa Moshfegh, Grace Paley, Elizabeth Smart, Joan Didion, and Michael Ondaatje from a personal collection she refers to as her Museum of Beautiful Sentences.

Just over a year after her tenure at UBC began in January 2018, Ohlin – who is originally from Montreal and lived in the U.S. for 25 years – is comfortably settled into her new role.

Ohlin’s office is similarly generic, although there’s an attempt at warmth with a burgundy area rug and two comfortable guest chairs. A large, full bookshelf holds multiple hardcover and paperback editions of her work, including copies of her 2012 novel, Inside. Soon she’ll have to clear a spot for copies of her new book, Dual Citizens, due out with House of Anansi Press in June. She says she has no space to store her books in her faculty housing, a townhouse near the university that she shares with her husband, journalist Stephen Rodrick, their five-year-old son, and a black-and-tan coonhound named Peanut.

When asked about adapting to life in Vancouver, Ohlin jokes, “The dog has a raincoat; the kid is in school. We’re all good.”

As a “private person who doesn’t enjoy a lot of attention,” Ohlin is at her most animated on the topics of books and reading. “I’ve always been a reader. I grew up in a very bookish household and books were always where I felt the most at home,” she says. Her father taught in the English department at Montreal’s McGill University and her mother trained as a teacher; together they encouraged Ohlin and her three siblings to read.

As a child, Ohlin would adopt the speech patterns of characters such as Jo from Little Women. She also cites Tove Jansson’s Moomin series as an early favourite. “Books are where I come from. I feel more like books are my home than any particular country or city or place,” she says.

This passion for literature is also the wellspring of her own writing. “I read a lot and I get really excited, and I want to write back to the authors who have inspired me,” she says. “My writing comes out of that impulse to be part of this big flowing river of literary conversation that flows across place, time, and culture.”

Dual Citizens was inspired in part by the complex relationships between women in Elena Ferrante’s Neapolitan series and Zadie Smith’s novel Swing Time. In Ohlin’s novel, sisters Lark and Robin forge a childhood reliance on each other as a reaction to their mother’s erratic behaviour. After college, Lark becomes a filmmaker working for a renowned documentary director. Robin studies classical piano and goes on a tour with an orchestra.

Some of the prose in Dual Citizens belongs in its own Museum of Beautiful Sentences. Within the first few pages, the characters encounter a wolf. Ohlin uses poetic repetition that evokes music and breathing to describe how the rest of the pack vocalizes “in rolling harmonics … their silvery howls rose and fell, rose and fell.”

At its heart, Dual Citizens is about the love between two sisters. In Ohlin’s own conception, the novel addresses “questions of identity connected to feminism, motherhood, and what art-making and ambition can look like in women’s lives.” The book shows how pressures to conform and to support the work of male colleagues can thwart a woman’s ambitions. Both Lark and Robin face what Ohlin describes as “avenues toward self-definition as artists in a world that doesn’t always equate greatness and brilliance with women.”

In recent years, Ohlin has found herself writing a lot about female dyads – friends, co-workers, sisters. “I’m interested in the ways that women define themselves in relationship to, in complement or contrast to, another woman who’s important to them,” she says. “It’s a big part of identity formation for many women. You see this intensity in a lot of families and also in a lot of ‘best friendships.’ The complexity of these bonds offers rich material for fiction.”

Ohlin was born and raised in Montreal, but as a dual citizen herself (her mother is American), she left to pursue her studies in the U.S. when she was 16. She completed her undergraduate degree at Harvard University, earned an MFA at the University of Texas, then proceeded to teach writing in undergraduate and graduate programs in Rhode Island, Pennsylvania, and North Carolina. She also served as the Mordecai Richler Writer in Residence at McGill in 2017.

Her novel follows a similar path, the story wandering from Montreal to a U.S. college near Boston, then follows its characters to New York, rural Pennsylvania, Brooklyn, and eventually back to Quebec.

Ohlin is tight-lipped about her own experiences of dual citizenship or writing stateside versus north of the border. It’s clear she prefers to leave any analysis of these subjects on the page. “It’s hard to summarize the many specificities of place,” she says.

She does offer details of her writing process: she likes a consistent, set routine every day and writes in intense bursts around her administrative and teaching schedule. She doesn’t outline, instead letting the story unfold as she writes, a process she describes as “labour intensive” because it results in many drafts. (She says this novel took between six to 10 drafts, depending on how you count.) While writing Dual Citizens, she was also working on a new story collection, to be released by Anansi next year.

This is in contrast to Ohlin’s experience with her previous two titles. When Inside was set to launch in 2012, Ohlin’s New York agent, Amy Williams, secured a deal to release the novel on the same day as Ohlin’s story collection Signs and Wonders. The purpose of the unusual strategy, according to Ohlin, was to “create the idea I was a writer with a body of work and not just one book coming out at a time.”

Inside – a novel about intertwined characters navigating whether one can really save another person – did gain attention: it was shortlisted for the Scotiabank Giller Prize and the Rogers Writers’ Trust Fiction Prize. It was also the subject of another – less desirable – kind of focus: a review of the book by William Giraldi in The New York Times was so exceedingly harsh readers took to Twitter in outrage. Ohlin says she never read the review but admits to being buoyed by the massive social-media pushback.

“It feels like a long time ago, 2012,” Ohlin says, taking a moment to reflect on how literary commentary has evolved online since then. “It’s so much more wide-ranging and sophisticated.”

Perhaps her level-headed response to the Times review primed her for her position at UBC. The previous chair, Steven Galloway, was fired amid an ongoing scandal. The fallout is still winding its way through the courts as a result of a 2018 defamation lawsuit Galloway filed against more than 20 people, including several former colleagues and students.

While obviously aware of the fraught environment she was walking into, Ohlin took up the reins in the hope of replicating the most meaningful, rigorous, and exciting experiences she’d had in creative writing and forging positive change across the department. Ohlin’s vision is to ground UBC’s program in effective writing-craft instruction, emphasizing the program’s strong multi-genre course offerings. She also wants to encourage co-curricular opportunities, such as a cold-reading series where actors read student screenplays and a program where graduate students teach at public schools.

“My job as chair is a support position,” she says. “I try to get a sense of what the students might need to have the best possible educational experience. And then what faculty need in order to do their best work. What do staff need in order to feel happy and productive in the workplace? And then my job is to try my best to create the circumstances under which those things can happen.”

It appears as though duality and possibility are baked into Ohlin’s worldview. The Canadian-U.S. citizen was attracted to a double career as both author and educator in part because it provides the opportunity to engage in literary discussions and a sense of community. “Teaching has enabled me to be part of a conversation that’s bigger than myself, bigger than my own work, and to connect with other people in ways that are really important to me,” she says. “I love learning from the students and being around them and hearing what they’re reading. I just get really excited about it.”