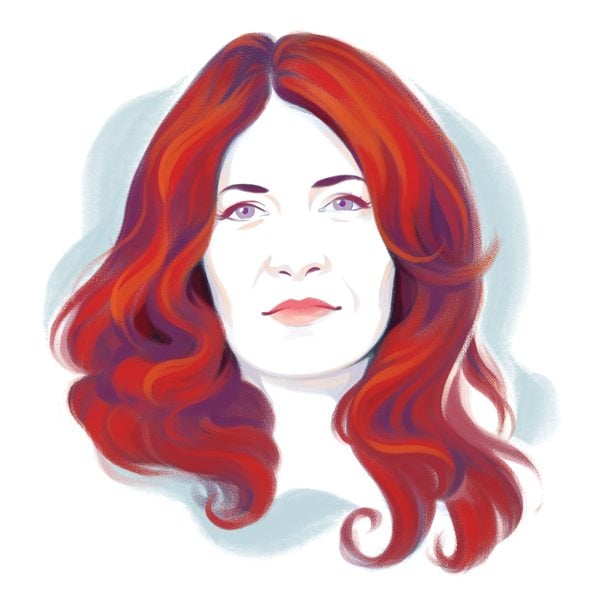 Amber Dawn knows what it’s like to hail from a small town, to feel torn between claustrophobia and nostalgia. The Vancouver-based writer grew up in tiny Crystal Beach, Ontario, home to 8,000 residents, and she plumbs this experience in her new novel, Sodom Road Exit, named for a local highway off-ramp.

The Lake Erie town is known for an amusement park that operated there for a century. It drew people from around the region, including Amber Dawn’s American parents, who met and married as hippies, crossing the border from Buffalo, New York, after her father got his draft card. The couple raised their daughter in the shadow of the famed attraction, which plays a starring role in the book, publishing with Arsenal Pulp Press in March.

“I usually start with the self, but this time I started with place,” says Amber Dawn. “I really wanted the chance to write about my hometown. It’s an amazing place. I think there should be 20 new novels about Crystal Beach.”

Set in 1990, Sodom Road Exit follows Starla Martin, a troubled, somewhat narcissistic 20-something whose debts have driven her to return from Toronto to her mother’s home in the small town. The novel’s central, consistent element is a vivid sense of place; the Crystal Beach of the past comes alive, with its mix of ex-carnies, strippers, drunks, busybodies, spiritualists – and isolation.

This depiction reflects the author’s own experience growing up there. Other than summertime influxes of tourists, Crystal Beach was a sleepy community throughout Amber Dawn’s youth, becoming more so after the park closed in 1989. “When I visit home, I’m always amazed at the small things, like how dark nighttime is,” Amber Dawn says. “I can stand out in my mother’s backyard and it’s pitch black.”

Growing up, Amber Dawn was an introvert who sought refuge in journaling. Her working-class childhood was shaped by her parents’ tumultuous divorce; her teen years by a yearning for the wider world. “I fall into that category of queer feminist who left a small, rural place young because I didn’t see a future for myself there,” she says.

In 1992, at age 17, she moved out west to Vancouver, where she supported herself by working in the sex trade. She chronicled this dark period in 2013’s How Poetry Saved My Life: A Hustler’s Memoir, which won her festival invitations and the Vancouver Book Award, and helped connect her to communities of sex workers across North America.

“I meet a lot of people who really understand what it means to be family to each other, to show up for each other,” says Amber Dawn, who has since become a mentor to writers who face poverty-related barriers. “I meet a lot of wildly creative people … and I meet people whose story, and life, is cut short, in a way that it shouldn’t be, because they haven’t been given room to fully inhabit all of who they are.”

It was writing that allowed Amber Dawn to fully embrace who she was. She took an open-enrollment poetry workshop at the University of British Columbia in the late ’90s, and her instructor, poet Kate Braid, became a mentor. With Braid’s support, Amber Dawn was accepted into UBC’s undergrad creative-writing program. The writing process proved pivotal to her coming out. “My queer identity was more available to me on the page than it was verbally,” she says.

Amber Dawn moved on to complete a Master’s at UBC – where she is now an instructor – and to publish her first novel, Sub Rosa. That book, which won the author a 2011 Lambda Literary Award, follows a band of underage prostitutes who are granted magical powers, including safety and freedom from stigma. “It allowed me to ask, ‘What if things were different? What if these things that we think are so unjust about the world could be shifted?’”

With her second novel, Amber Dawn returns to the realm of magic realism. Sodom Road Exit is at once a mother-daughter saga, a lesbian romance, a coming-of-age tale, a complex survivor narrative, and – surprisingly – a supernatural journey.