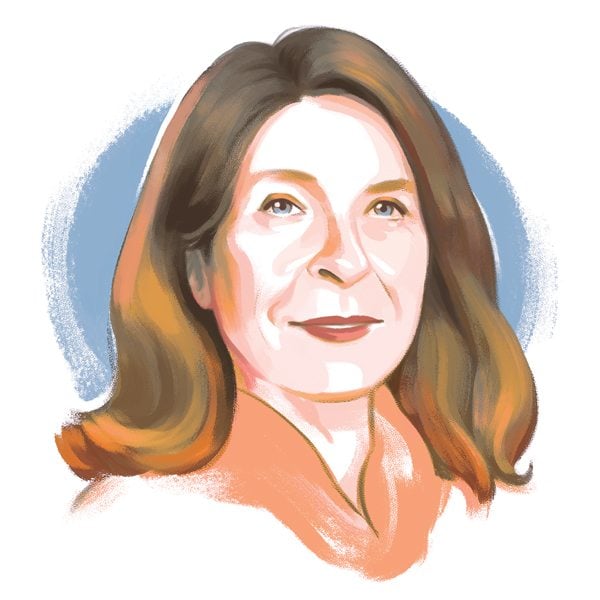 When Bernadette McDonald was a young university student, she took a job as a camp attendant at Lake O’Hara in B.C.’s Yoho National Park. Her days consisted of patrolling trails and talking to campers. At dusk, McDonald would trek back to her cabin, fire up a wood stove, make dinner, and watch the sunset. She experienced a sense of wonder traversing remote valleys, ridges, and peaks, and felt as though something important was falling into place for her. “To be able to walk and hike and paddle, and see new places, and experience new things – and scare myself quite frequently – it all clicked,” she says. “It was what was missing in my life.”

There’s a unique liberty found in the mountains, a liberty McDonald has dedicated her career to sharing with others, through film festivals, cultural organizations, public talks, and writing. In her latest book, The Art of Freedom: The Life and Climbs of Voytek Kurtyka (Rocky Mountain Books), McDonald finds a kindred spirit in the famed Polish climber, capturing a shared drive for adventure.

In public talks, McDonald often shares an experience that sowed the seeds for her love of mountain life – an experience that predates the life-changing revelation in Yoho. Having grown up on a farm in Saskatchewan, McDonald originally associated the outdoors with gruelling work. But a family holiday to Banff at age 11 imprinted the western wilderness on her psyche. That first stroll through the snowy town, a strange magic occurred, and the landscape spoke to her. “It was starry, and you could see the outline of the mountains,” she says. “There was a lot of snow around the town, and it was quiet. It was this incredible enveloping feeling of being in this valley surrounded by peaks. It really felt right.”

McDonald went on to study music at Pacific Lutheran University and the University of Western Ontario, but the Rockies never lost their hold on her, and in the mid-1970s she headed west, married her climber boyfriend, and never left.

Having found a home, she soon discovered a community of like-minded adventurers. She volunteered for years at the Banff Mountain Film Festival, eventually serving as director and founding its book festival component. She also later founded the groundbreaking Centre for Mountain Culture.

McDonald never set out to become a writer, but in 2000 she co-edited Voices From the Summit: The World’s Great Mountaineers on the Future of Climbing, a collection of essays celebrating the film festival’s 25th anniversary. She’s since written and edited nine more books.

Polish climbers have been especially intriguing for her. McDonald recalls being in Poland years ago, to assist with a festival there. At the closing-night party, wandering around the room, she realized these were “the cream of the crop” of Himalayan climbers – and that there were a lot of people that weren’t in the room, lost to tragic accidents. “It occurred to me that their stories were so compelling,” she says. “And yet in the English-speaking world these stories were relatively unknown.”

McDonald has since chronicled the lives of Polish climbers in books like Freedom Climbers: The Golden Age of Polish Climbing. The Art of Freedom continues that work, focusing on enigmatic mountain man Kurtyka, who agreed to cooperate, despite shunning the limelight for much of his life. “I think he left feeling I understood him,” McDonald says. The hunger for freedom, the near-spiritual connection to the mountains, the despair when things go wrong up there – all of this she can “totally relate to,” she says.

This would be an impressive feat for anyone, but is especially so for a woman, often outnumbered in the male-dominated mountaineering set. McDonald says her gender has rarely been a problem; in fact, it’s sometimes been an advantage, since she’s never posed a threat to competitive male climbers. Still, there have been instances when her credibility has been questioned, so she’s especially happy to have recently made the shortlist for the 2017 Boardman Tasker Prize – one of the most prestigious awards for mountain literature – which she won in 2011 for Freedom Climbers.

Honours like this are indicative of a broader shift taking place across mountain culture. In recent years, McDonald says, more women have written books and essays, filled spots on juries, and given voice to all the female outdoor adventure enthusiasts who, like her, have built lives around the thrill of scaling mountains.

“It’s a heightened existence,” she says. “You are so attuned to the nature that surrounds you.”