Candace Savage had to look no further than her own backyard – or, more accurately, her own kitchen – to find inspiration for her new book, Strangers in the House: A Prairie Story of Bigotry and Belonging.

Savage was renovating part of her 1920s-era home, built in one of Saskatoon’s first neighbourhoods, when she noticed some interesting items fall out of a kitchen wall. Among a blizzard of wood-shaving insulation was a worn shirt collar, book pages, bits of school arithmetic assignments, a lid, and three photographic negatives. Why the seemingly random objects were in the wall remains a mystery to this day.

“Eventually, I looked at all this stuff,” says Savage. “I mean, it’s grotty and horrible and very dirty and, in a moment of weakness, I threw away two of the negatives – but I still had one. It took me a long time to realize that on at least one of these items was the name Ralph Blondin.”

The surname Blondin struck a chord. Prior to the renovation, Savage’s daughter had visited the Saskatoon Public Library’s local history room for a school project. While there, she carefully wrote on a small scrap of paper the names of all of the people who had lived in her family’s home over the decades. Savage, a self-described pack rat, had saved this information.

“The very first name on the list always caught our attention, because it said N.S. Blondin or Napoléon S. Blondin,” says Savage. “Here in Saskatoon, we know the geography of our city; we know that, at least originally, people who were marked as ‘ethnic’ mostly lived on the other side of the [South Saskatchewan] River in the Riversdale neighbourhood, which had been created as a working-class neighbourhood. So it was just immediately interesting that out of all of these names that sounded quite Anglo, suddenly there’s this very French name.”

Savage decided to learn more about the history associated with her house by conducting genealogical research and by consulting city and provincial archives as well as published histories of Saskatoon. She soon came across the name Napoléon Blondin again: on a list of Métis people in Saskatchewan’s Qu’Appelle Valley who were petitioning the governor general and the political powers in Ottawa for recognition of their land rights in the late 1800s.

“And so I start to wonder if this house could possibly be a door – like, you know, a magic portal – into the history of Western Canada,” says Savage. “What are all these associations with this name that are clustering around this house?”

A sense of place figures prominently in Savage’s storytelling: she draws inspiration from her Western Canadian roots. Savage has been a prairie girl since birth. In 1949, she almost came into the world in a pickup truck – her pregnant mother was a bit late getting to the hospital – somewhere in northern Alberta. It’s a fitting story for a quintessential Western Canadian writer with a strong connection to the land and a deep respect for the natural world around her.

“In the course of my own life, I have learned that where you are conditions your thoughts and it determines what you can understand,” Savage says. “It’s very important to me to be rooted in this place. I came to Saskatoon first in 1970. … I left and came back again in about 1990. I came back planning to stay. Even though both of my grandmothers were born in the U.S. and both of my grandfathers were born in Ontario, I have a very strong sense of myself as a prairie person and I have never been able to persuade myself to go anywhere else.”

Savage’s father worked as a school administrator, so she moved many times throughout her childhood, mainly in Alberta, before receiving her bachelor’s degree in English literature at the University of Alberta in Edmonton. She is the author of more than two dozen titles, including Prairie: A Natural History, originally published in 2004. The comprehensive book, a bestselling guide to the biology and ecology of the prairies, showcases Savage’s prowess as a nature writer.

In 2012, Savage’s A Geography of Blood: Unearthing Memory from a Prairie Landscape was awarded the Hilary Weston Writers’ Trust Prize for Nonfiction. Inspired by her house in the small town of Eastend, A Geography of Blood paints a portrait of the beautiful Cypress Hills landscape in southern Saskatchewan and offers a new look at plains history and what happened to the Indigenous people of the area. 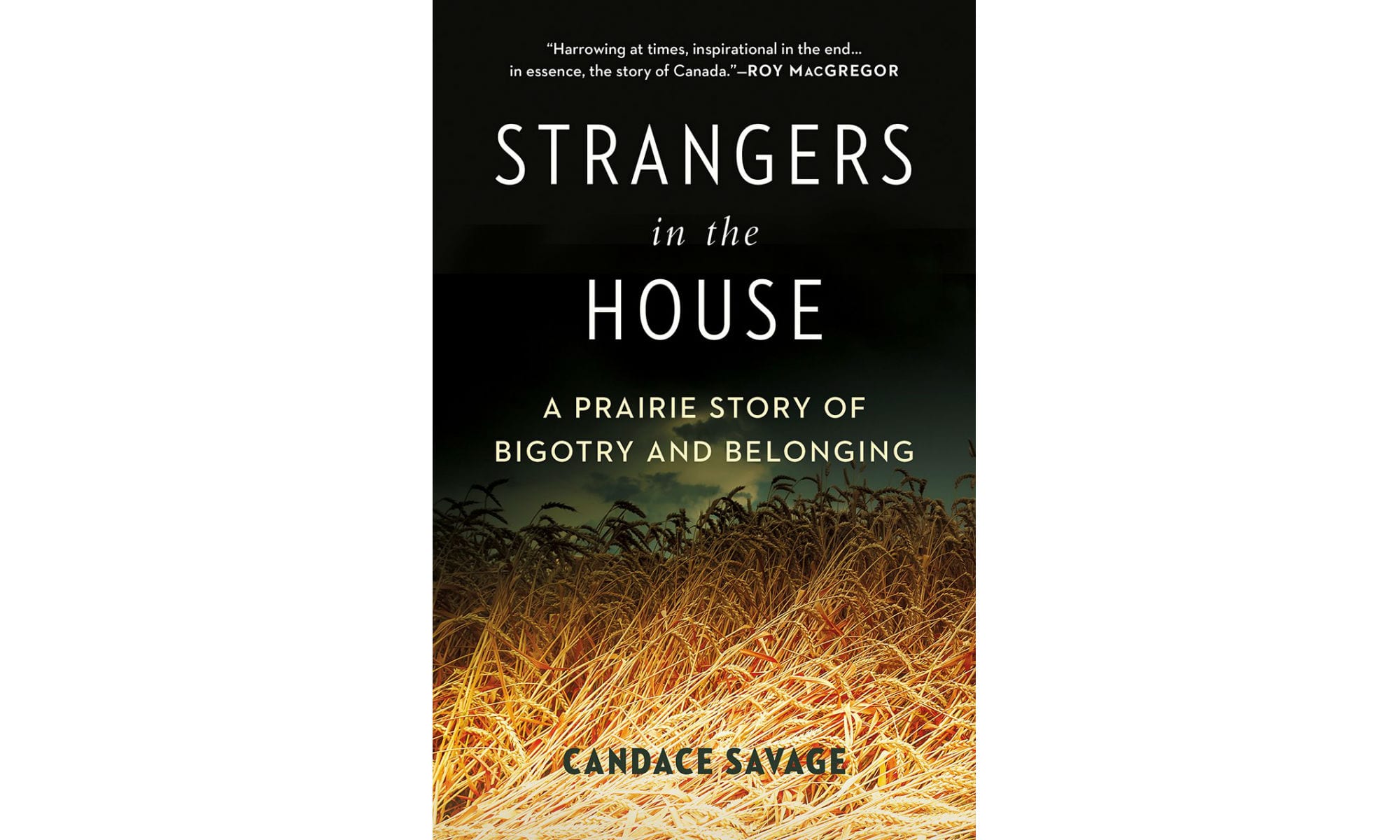 Now Savage’s Saskatoon home, and its intriguing family history, is helping her reveal the truth about the bigotry connected to the English settlement of Canada. Strangers in the House (Greystone Books) considers a time during which French speakers like Napoléon Sureau dit Blondin were discriminated against by those wielding power in an unjust environment tainted by the Orange Order, which originally formed in Ireland as an anti-Catholic organization.

“It was shockingly powerful in Canada,” Savage says.

The Ku Klux Klan also influenced the Canadian cultural landscape. The white-supremacist group flourished in the 1920s in the middle and northern parts of the U.S. before coming into Ontario and then making its way into Saskatchewan.

Savage’s book examines how animosities were culturally perpetuated and how one family struggled to survive in Saskatchewan at a time when “foreignness” was seen as a disadvantage. As she conducted her research, Savage learned Napoléon Sureau dit Blondin, who, in the 1920s, had indeed built the Saskatoon home that now belonged to Savage’s family, was not Métis but French Canadian. Napoléon Sureau dit Blondin was also Ralph Blondin’s father.

“Because of genealogy – and belonging is so important in Quebec – it’s very easy to trace these connections back to the beginning of time,” says Savage. “So it turns out that they are French Canadian, though they do have unacknowledged Métis relatives – some of whom are around the prairie.”

While the historic 1885 Métis resistance in Saskatchewan is included in Savage’s book, Strangers in the House centres on “the basis of English-Canadian society and English-Canadian dominated settlement in Western Canada,” she says. “It turned out to be a story that was very consequential in the history of our country as a whole, but that none of us know – or very few of us know.”

By using her house at a starting point, Savage builds on a technique she began to experiment with in A Geography of Blood; she situates herself in the story as a first-person narrator and character, transforming the work into a hybrid of history and memoir.

Acclaimed Western Canadian historian and author Bill Waiser read an early copy of Strangers in the House; the book made him feel as if he was getting to know the past inhabitants of Savage’s home by gathering with them and sharing stories.

“I felt [like] I’m sitting together with them at the kitchen table; you know, they’re speaking to me from the heart, baring their soul, and it’s a really gripping tale,” says Waiser, a member of the Order of Canada who served as a professor in the University of Saskatchewan’s department of history for more than 30 years. His book, A World We Have Lost: Saskatchewan Before 1905, won the 2016 Governor General’s Literary Award for Nonfiction.

In the Saskatchewan of the late 19th and early 20th centuries, “there was a really angry atmosphere” concerning immigrants in the province, Waiser notes.

“We pride ourselves in Saskatchewan today on being a multicultural society, but that’s really a post–Second World War event,” he says. “Up until the 1930s, we didn’t like diversity in this province; it didn’t define us. The blueprint for this province was English, Anglo-Canadian, and Protestant. And so what Candace talks about is another uglier side to the province’s history – when it was anti-immigrant, anti-Catholic – and that’s part of the story.”

The heavy content of Strangers in the House contrasts with the relatively lighter fare of Savage’s other new book, Hello, Crow!, which will also be released on Sept. 24 as one of the first titles on Greystone Books’s new kids’ imprint. Written by Savage and illustrated by Vancouver artist Chelsea O’Byrne, Hello, Crow! is a picture book about an outdoorsy little girl named Franny who befriends a crow, much to the disbelief of her distracted father.

Hello, Crow! is inspired by the true story of an eight-year-old girl in Seattle who fed crows in her garden and received gifts from the birds in return. The story interested Savage, a bird lover and environmental activist whose previous works include Bird Brains: The Intelligence of Crows, Ravens, Magpies, and Jays (1995) and Crows: Encounters with the Wise Guys of the Avian World (2005).

At its core, Hello, Crow! is a picture book about possibility, crafted with a reverence for nature. “The meaning of the story is it’s wonderful out there,” says Savage. “Who knows what will happen if you go outside?”

When asked about the difference between writing for children and for adults, Savage points out that she doesn’t “really think of them as being separate activities.” Ultimately, she says, a writer needs to tell a story “with enough silences” that there’s room for readers to feel and to understand in their own ways.

“If you’re telling the reader how to feel or how to think about things, then nothing really happens,” she says. “The meaning only really exists when it’s created in the mind of the reader – and I think that’s true for an adult or a child.”

Tagged with: Candace Savage, Strangers in the House