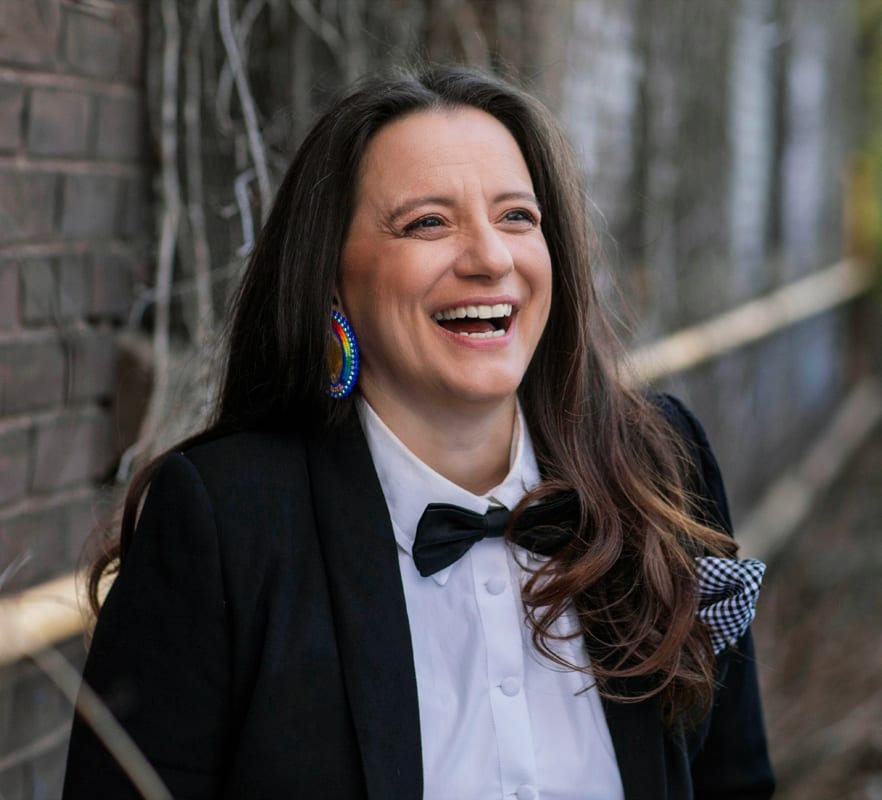 Cherie Dimaline walks into Toronto’s BATL facility with an unhurried swagger, like a gunslinger arriving for a duel. The author of the YA dystopian blockbuster The Marrow Thieves – which, as of press time, had been number one on Bookmanager’s Canadian kids chart for 76 non-consecutive weeks – is here to work on a skill not immediately associated with the CanLit canon: hurling axes.

“This is great training for the zombie apocalypse,” she says, excitedly grabbing my arm. Her first throw doesn’t hit the target, but soon she’s nailing it again and again. “Well, I am from a family of trappers.” She shrugs with a half-smile.

Cherie (pronounced like the French word for “dear”) Dimaline grew up in the Georgian Bay Métis community, an Indigenous settlement near Penetanguishene, Ontario. “My grandfather was the Indian guide for the tourists on Georgian Bay,” she says. “He was also a horrible alcoholic.” When her mother was seven, Dimaline’s grandmother, Edna Dusome, took her daughter in the dead of night and left.

Growing up, Dimaline shared a room with her grandmother. She would keep the woman she calls Mere awake at night by leaving the light on to write. “I hope all this scribbling comes to something good one day,” her grandmother would grumble. Dimaline promised it would.

Dusome died in 2006, the day she learned that her granddaughter’s first novel, Red Rooms, had been accepted for publication by Theytus Books. Flash-forward 13 years, and Dimaline’s fifth title, Empire of Wild, to published by Knopf Canada on Sept. 17, opens with an apropos quote from Dusome, the woman who immersed Dimaline in her community’s traditional storytelling: “Just shut up, you; and listen.” 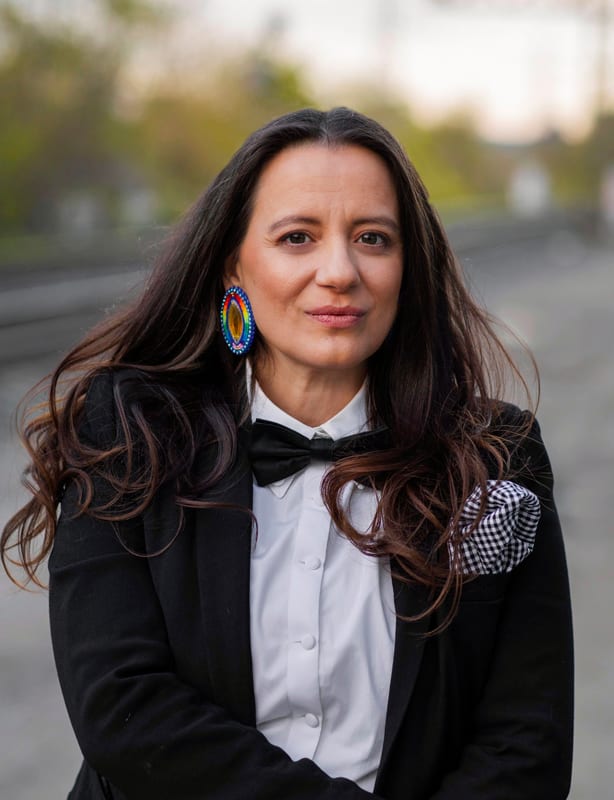 A supernatural dark fantasy that Dimaline’s friend and fellow author Eden Robinson has compared to Neil Gaiman’s American Gods, Empire of Wild is about a woman’s search for her husband set against the backdrop of the Métis community’s rogarou legends. According to the stories, the rogarou is a big black dog known to live on the road outside Canada’s isolated Métis communities.

For girls and women, the rogarou warned against travelling too far from home. Boys and men who disrespected women, the land, or the community could be transformed into the rogarou themselves.

The story came to Dimaline on a plane, after reading journalist Joel Barde’s article in The Walrus about how U.S. evangelicals are actively converting Indigenous Canadians. “The important part was to have an Indigenous preacher,” she says. “I thought, ‘What kind of person would deceive their own people?’ Well, the fucking rogarou would.” She fell asleep on the plane, then awoke with a start. She grabbed the airsickness bag and started writing. “I cannot wait for the day a university asks for my papers and I say, ‘Here’s the barf bag,’” she says, laughing.

Dimaline wrote what became Empire of Wild obsessively, sequestered in her office with cigarettes and vodka. She looked around one day and realized all the space in the room had been papered with her notes detailing the novel’s world.

The story begins with Joan, a Métis woman in the fictional Ontario village of Arcand who is passionately in love with her husband, Victor. She’s devastated when he disappears, but is shocked to find him return as a Christian missionary. The Métis-Anishinaabe man introduces himself as Reverend Wolfe. He’s accompanied by a white man, Thomas Heiser, who is negotiating with the Métis to build a pipeline on their land. 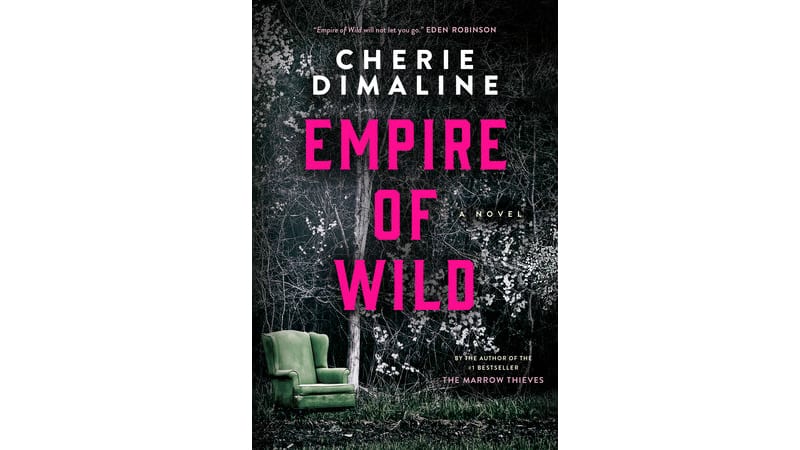 Empire of Wild is Dimaline’s first book since The Marrow Thieves, a commercial and critical phenomenon that has put an unprecedented spotlight on her work. On Nov. 1, 2017, The Marrow Thieves won the Governor General’s Literary Award – Young People’s Literature, Text. On Nov. 2, it won the Kirkus Prize for Young Readers’ Literature. “November 3, every agent in the fucking universe called me,” she says.

When she met Dean Cooke of the literary agency CookeMcDermid, she posed her sphinx’s riddle again. “Darling, why would you ever have to choose?” he said. “I’ll sell them both.” She liked that answer.

With Cooke as her guide and his colleague Rachel Letofsky representing her in YA, the courtship now shifted to the publishing houses. “I want someone who will properly edit me,” she remembers thinking. She had published her first three books with Indigenous presses: 2011’s Red Rooms and 2013’s The Girl Who Grew a Galaxy with Theytus Books and 2015’s A Gentle Habit with Kegedonce Press.

“What happens a lot with Indigenous literature and stories is it either goes to an Indigenous house, which are beautiful, amazing institutions, but they don’t have a lot of resources, so you end up not having the greatest, most fulsome editorial experience,” she says. “Or you go to a house where people are so scared to touch the story, because they don’t want to get it wrong. They treat it with kid gloves.”

“Everyone in my editorial group wanted to meet Cherie,” Collins says. “I decided that I would make it as comfortable and as lively as it could be. We got some food in, and we got a couple of bottles of wine and it was like, I don’t know, maybe noon?”

Collins felt an instant connection. “There is no real reason for why these kinds of things happen,” she says. “But we just looked at each other and we immediately knew how to talk to each other.”

Dimaline’s first impression is equally vivid. “I remember Anne walking into the room and she’s beautiful, with like a flowing dress, and these very piercing eyes,” she says. “And I was like, ‘Fuck, I’m a little bit intimidated!’”

After a gauntlet of meetings where marketing teams had been selling their presses like they were Las Vegas time shares, Collins cut through the noise. Dimaline recalls her turning her chair toward her and, beginning with page one of Empire of Wild, firing off pointed editorial questions.

Collins says her meetings with Dimaline now typically extend over hours and multiple glasses of wine. The editor’s recollection of her first meeting with Dimaline is perhaps not uncommon for those who’ve met the novelist, or for her ever-growing army of readers: “We ended up having a hell of a time,” she says.

Empire of Wild is the first book to be published under a four-book deal with Penguin Random House Canada – the other books will include a speculative fiction title for Knopf and two YA titles for Penguin Teen Canada, including a gothic story about a young girl who lives in a graveyard, where her grieving father operates the crematorium.

As if writing four books wasn’t enough, Dimaline is also a mentor for the MFA program in the creative-writing faculty at the Institute of American Indian Arts in Santa Fe. (They asked for her alma mater; she has a Grade 10 education.)

There’s also her role as executive producer on The Marrow Thieves TV series, for which she is a co-showrunner and co-writer alongside veteran producer Jennica Harper, despite never having written for television before. The series, from production company Thunderbird Entertainment, is set to begin filming in spring 2020. “There are agents already calling for their clients, some big names want to be involved, and there have been calls from some big broadcasters, like Netflix and Warner Brothers,” Dimaline says. “I was like, ‘How?’ This is a small little story.”

Adding to those responsibilities: this summer Dimaline is moving with her husband, Shaun, and youngest daughter, Lydea, to Vancouver, where she will take on the role of managing editor at Theytus Books, the oldest Indigenous publishing house in Canada.

It was something she’d talked about with Theytus’s publisher Greg Younging, who died in May. “It’s now or never, Cherie,” he told her the last time she saw him. Dimaline says, “I am starting to talk to the team about doing the things that I promised Greg, which was building partnerships, distribution, doing better for the writers, and making sure that Theytus keeps going.”

Dimaline believes it is her duty to keep the torch of Indigenous stories burning, having been entrusted with those stories by her own mere. It’s a sentiment that’s grown in her at the urging of writers Lee Maracle (“my adopted auntie”) and Maria Campbell (“a great Métis writer who adopted me as her granddaughter”).