My video chat with cartoonist Cole Pauls is just getting going when I hear an alarm coming from somewhere in his cozy-looking Vancouver apartment. “I have a timer every hour,” the 27-year-old explains. “I have to vote for Tim.” Broken Pencil’s annual indie illustrator contest is ending that night, and Vancouver comic artist Tim Bauer is in the running. Pauls puts our conversation on hold for a minute to cast a vote for his friend, and then we’re back.

Pauls is infectiously enthusiastic about the release of his second book, Pizza Punks, despite the particular challenges of 2021. In a non-pandemic year, there is a circuit of in-person comic arts festivals across Canada where new books like his generate sales and buzz. It’s a scene infused with an analogue, DIY ethos and an emphasis on community. But in the face of a second year of COVID-19 cancellations, artists are still figuring out how to connect with readers from a distance.

The launch of Pauls’s first graphic novel, Dakwäkãda Warriors, in 2019 was a different story: a huge celebration was held in his hometown of Haines Junction, Yukon, where the book is set. Dakwäkãda Warriors is a unique project: both a rollicking adventure with starships and laser battles, and a work of Indigenous language reclamation that, in Pauls’s words, “assesses colonialism and living in the future as an Indigenous person.” The book’s pop-culture tropes mix with Southern Tutchone language, elements of Pauls’s Tahltan identity, and a fantastical sense of the place he grew up in to create something that readers of all ages love.

Pauls’s early influences cover a typical childhood diet of pop and pulp: Power Rangers, Metroid, his grandfather’s Conan comics – the kinds of things devoured by kids across North America. But a Haines Junction–based author may have had the greatest influence on Pauls of all. “When I was a kid, I had this children’s book called Alsek’s ABC Adventure. It’s illustrated and written by Chris Caldwell; she’s this really cool country gal but also punk as fuck at the same time. When I was a kid, this book blew my mind because it was a children’s book that was [set] in my hometown.” Caldwell’s art was not just in books but “everywhere” in the Yukon of Pauls’s youth – hockey rinks, businesses – and he says she is still considered “one of the main illustrative voices of the Yukon.”

He knew art was his passion, but it took Pauls time to see it as a career path. “I had always had a problem with education … I didn’t like the pressure of it. I always wanted to just draw; I knew that was my goal.” His tentative steps toward art school began in high school with an annual week-long art program in Dawson City, and after graduation he returned to Dawson for a one-year program at the Yukon School of Visual Arts. “I didn’t realize that I would enjoy art school so much,” Pauls says. It was his experiences in Dawson that finally convinced him to apply to Emily Carr University of Art and Design and move to Vancouver, where his comics career truly began.

“Every summer [as a teen], I would come down for at least a week to visit my uncle, and he would take me to comic shops and art galleries. That was my first taste of Vancouver.” Even then, Pauls wanted to be a part of Vancouver’s comics scene. He remembers realizing that “comics people are like normal people – they will hang out with you at a café,” though it took a few years of attending school and social events like the monthly Vancouver Comic Jam for him to feel like part of that community in the big city. 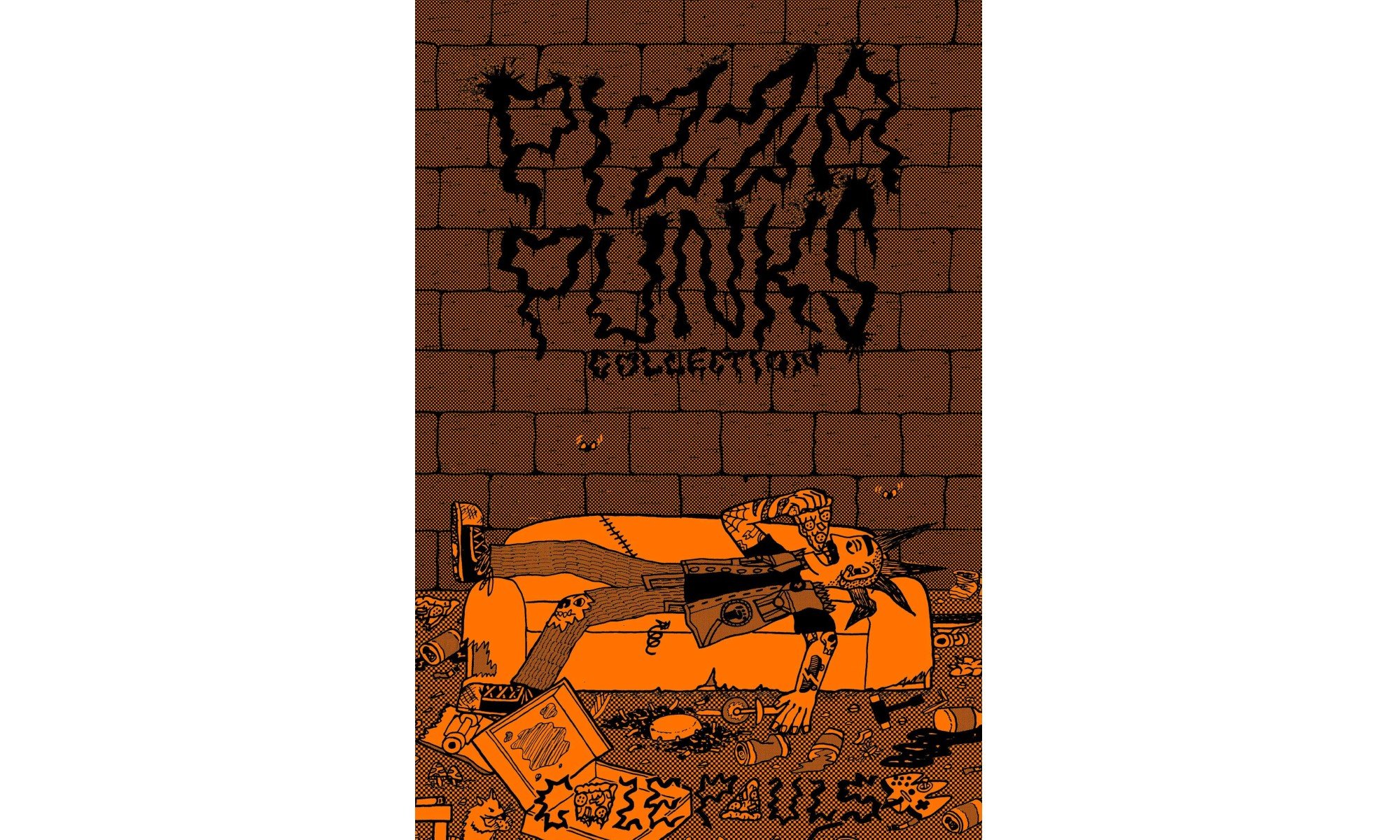 That community came through for Pauls. While he was still a student, the comics curator of Dunk, a newspaper published by Vancouver comic shop Lucky’s, tapped him for a regular strip. He accepted the gig without a concept in mind and needed inspiration. “I had pizza in my backpack for lunch, and I was listening to punk music, and I was like, Oh! Pizza Punks! It just made sense. So I made a comic strip out of segments of real life. I was a really big fan of Calvin and Hobbes and The Far Side growing up. This was my opportunity to do a strip like that, and I just ran with it.” In 2014, he began collecting these four-panel gag comics, featuring a rotating cast of hungry punks, into a series of self-published zines to sell at comics festivals and zine fairs, such as Vancouver and Toronto Comic Arts Festivals (VanCAF and TCAF) and the multi-city Canzine.

Pauls was making a name for himself as a zinester, and in 2015 the Yukon comics event YukomiCon commissioned an illustration that became his starting point for Dakwäkãda Warriors. As with Pizza Punks, Warriors was originally conceived of and self-published as comics zines, but unlike his earlier strip, it was a larger, continuous narrative. In the next two years, he had two self-published issues of Dakwäkãda Warriors under his belt and was actively looking for a publisher.

While exhibiting at TCAF in 2017, Pauls distributed samples of Warriors to all the Canadian graphic novel presses, but none were willing to commit to a work-in-progress. Those samples clearly made an impression though, and the next year when Andy Brown, publisher of Nova Scotia’s Conundrum Press, learned that Pauls was returning to TCAF with a completed final instalment, he was excited to set up a meeting. Brown signed Dakwäkãda Warriors then and there for the Conundrum list.

“I’ve been collecting zines into books with spines and calling them graphic novels for 25 years,” Brown says. “They come out of an authentic DIY culture, which I am happy to say continues to thrive in the face of the digital universe. I like to think I am constantly looking to the artists doing it for themselves because I know the audience for their work is already there, and hard earned, before I even come along.”

The book was an immediate success, and Pauls says Brown was soon asking for more. “Andy asked me, ‘What’s your plan for book two?’ I told him about Pizza Punks and that I had already drawn about 80 pages’ worth of comics. He had no hesitation: he just wanted to publish my next book. I’m really grateful for that.”

On its surface, Pizza Punks seems very different from Dakwäkãda Warriors. The core concept really is “punks eating pizza,” Pauls says. “That’s the gag: someone slipping on a piece of pizza, getting into a mosh pit and finding pizza …” But he also sees a more serious side to these Pizza Punks strips. “They unintentionally became artifacts of the Vancouver punk scene at the time. A lot of the venues and bands that I reference aren’t around anymore: they either got condemned or renovicted, or maybe the band broke up. So it became this time capsule for the scene that I was in.”

Brown agrees, saying, “Cole has been making a new [instalment of Pizza Punks] which will only exist as the final chapter of the collected book. He has been sending me the new strips and they are longer and meatier than the first issues.” Of these new segments set in Vancouver’s impoverished Downtown Eastside, Brown says that Pauls is “coming into his own as a cartoonist.” 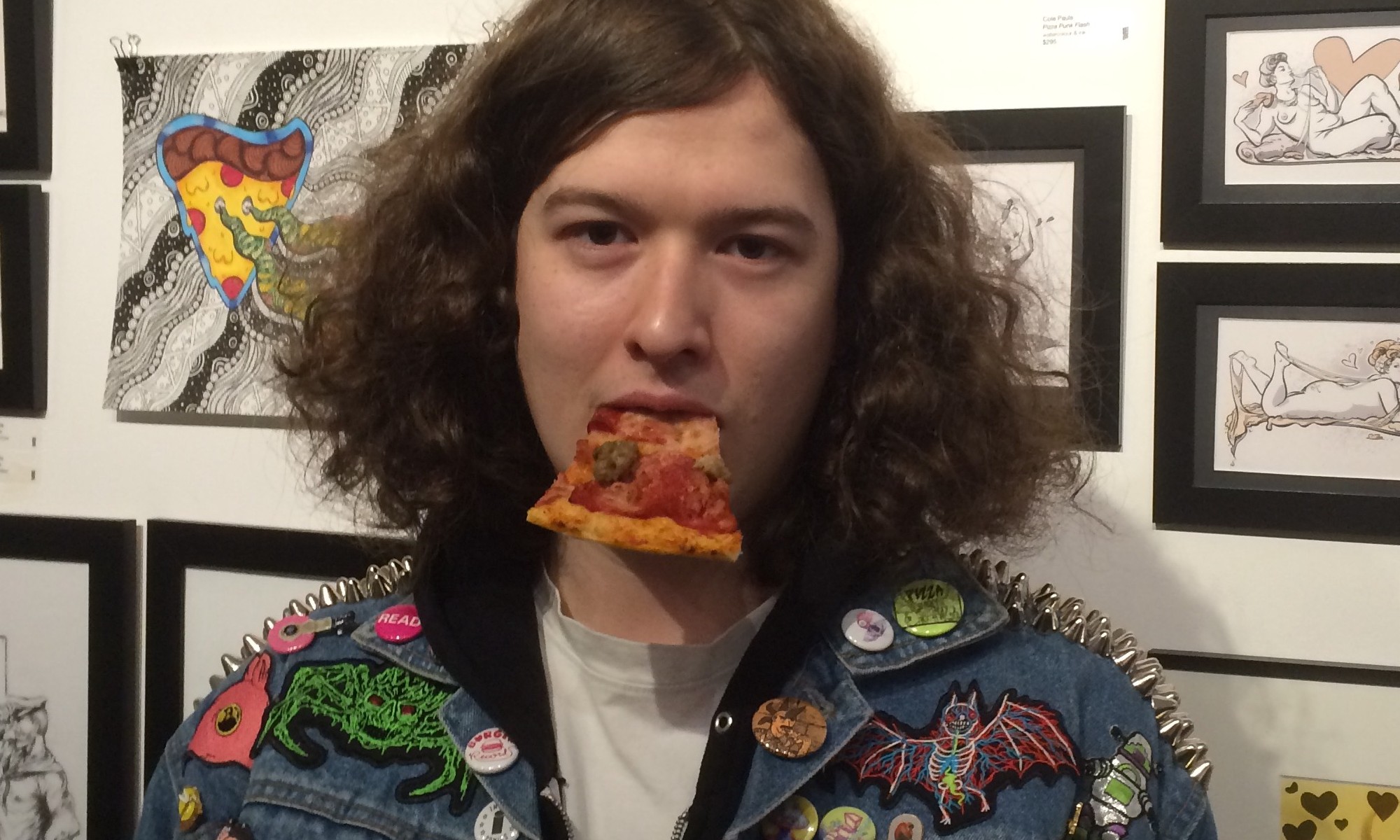 The artist and his muse

Pauls is thrilled with the launch plans for Pizza Punks, which involve a special collaboration with Vancouver’s Mint Records. “[We’re making] a split seven-inch record with [Canadian indie acts] Tough Age and Dumb. Both bands have written their own Pizza Punks anthems, and I’m doing all the [album] artwork. There’s also an eight-page comic that comes with it.” This is that analogue, DIY community ethos reinvented for a time of necessary distance. Pauls might even get to press the records himself. “I’m working with all my friends,” Pauls says. “I’m super excited for it because this is something I’ve always wanted to do: this is the dream project.”

Conundrum is in the process of signing Pauls for a third book, tentatively scheduled for 2022 and titled Kwändǖr. Like his first two graphic novels, parts of Kwändǖr have already appeared as comics zines. “I’ve been doing all these workshops with youth, and I’ve been making these heritage comics about my identity. Almost all the stories will be Indigenous, and they’ll almost all involve the Yukon or B.C.” While Warriors is about Indigenous futures, Pauls says, “Kwändǖr is going to be about the present, about racism today, and about my personal experiences.”

As we’re wrapping up our chat, I hear that alarm again: an hour later, it’s time for Pauls to show support for his friend once more. He takes a moment to cast his online ballot before popping back with a final word about the launch of Pizza Punks: “It’s gonna be cool.”