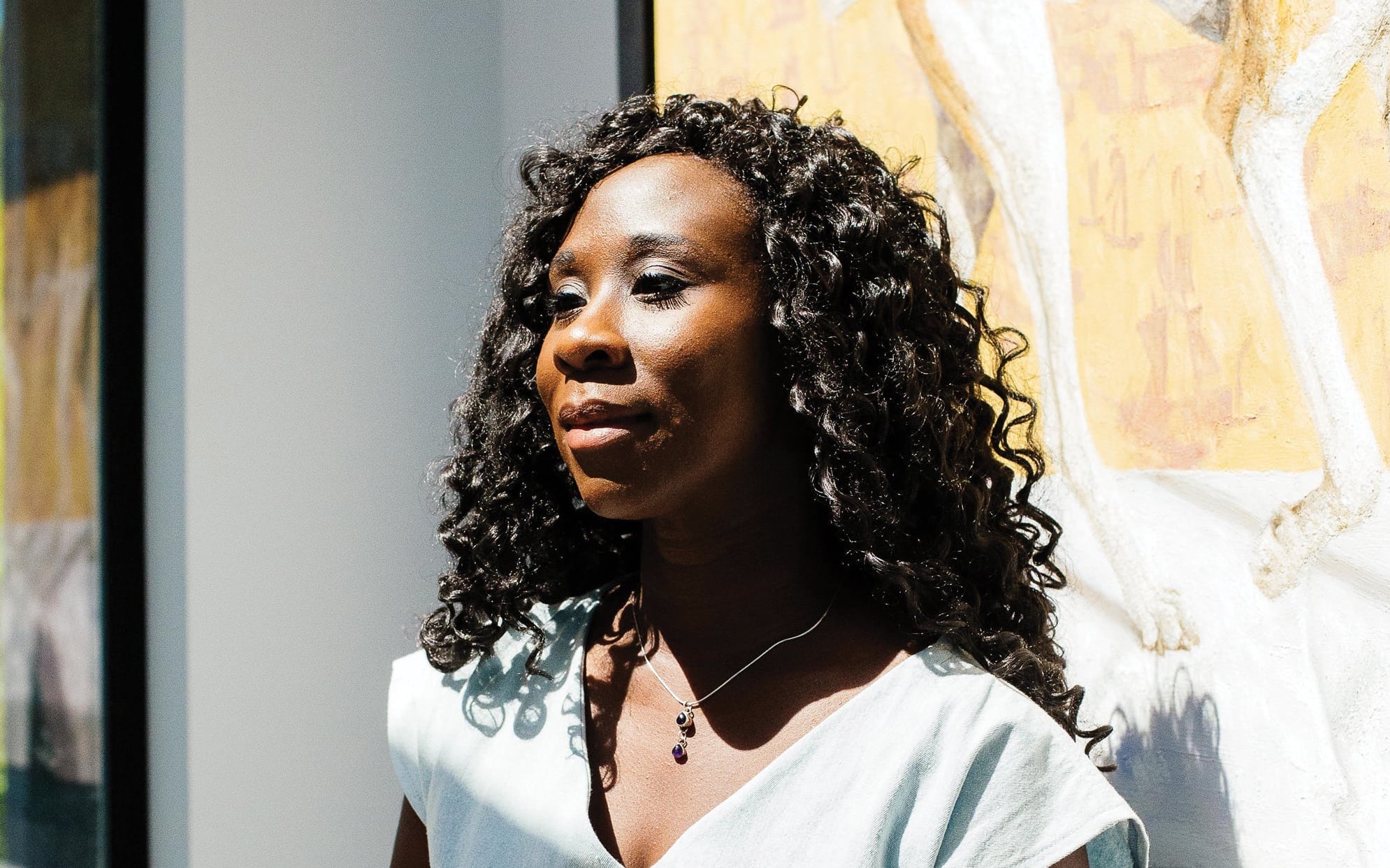 This seems like a strange admission, given the accolades the author has received for her work. Edugyan’s 2011 sophomore novel, Half-Blood Blues, won the Scotiabank Giller Prize and was shortlisted for the Man Booker Prize.

Before it was even published, Edugyan’s follow-up, Washington Black, found its way onto this year’s Booker Prize longlist alongside fellow Canadian Michael Ondaatje (for his novel, Warlight). [Editor’s note: Washington Black was named a finalist on Sept. 20.]

Despite the accolades, the Calgary-born writer, who lives with her husband, the novelist and poet Steven Price, and their children in a quiet home outside Victoria, B.C., remains centred and humble. “I don’t think anybody expects to be nominated for the Booker,” she says. “I was at home, just about to leave to pick up my kids, when I got a phone call from my [British] publicist saying that I’d made the longlist. I think I let out a shriek in my poor publicist’s ear.”

Edugyan is often described as a historical novelist, though she never consciously planned to write books set in the past. Yet over the span of 14 years and three novels, Edugyan’s name has become synonymous with globe-trotting historical fiction. “When I come across a reference in a text that I find appealing or haven’t heard of before, I feel compelled to express something about it,” she says. “Then I’m glomming on to it and digging more deeply, so it’s a natural curiosity about footnotes – historical footnotes. Things that we haven’t heard about.”

The attention to these historical footnotes has proven fruitful for the author, particularly those about marginalized Black communities. Her 2004 debut novel, The Second Life of Samuel Tyne, follows a Ghanaian immigrant who moves to a rural Albertan town, Aster, originally founded by African-Americans. Though Aster is fictional, it is based on Amber Valley in northern Alberta. Edugyan, who grew up in Calgary, discovered the African-American settlement after undertaking research for the novel. Similarly, Half-Blood Blues, a dual narrative set in Paris in the 1930s and Berlin in the 1990s, drew its inspiration from a neglected vein of history. While on a fellowship in Germany, Edugyan discovered the “Rhineland Bastards,” the children of German women and colonial African troops who were part of the French war effort during the First World War. The stories of this small population gave rise to her novel about an interracial jazz band.

Washington Black takes readers to Nova Scotia, England, and Morocco during the first half of the 1830s. The eponymous character, an 11-year-old enslaved boy living on a Barbadian sugar plantation, is selected as a manservant for Christopher “Titch” Wilde, the cruel plantation owner’s brother. Titch is an eccentric abolitionist and scientist who has built a hot-air balloon he calls a “Cloud-cutter.” On the plantation, Washington witnesses the death of Titch’s cousin, the knowledge of which could put the boy’s life at risk. When a bounty is placed on Washington’s head, Titch – whose aversion to family duties is as strong as his spirit of adventure and boyhood ambition – decides to flee with the boy in the Cloud-cutter, and the two embark on a voyage to the remote and frozen north.

Like Edugyan’s previous novels, Washington Black brings nuance and magnetism to relationships between colonizer and colonized. The journey is by turns tender and cruel, involving patterns of violence, abandonment, and uprootedness that create rifts across space, only to have time redraw the bonds. “Titch and Wash have a friendship,” says Edugyan, “but it’s never going to be a relationship between equals. The power imbalance in their dynamic is too grave.”

The transformative friendship at the heart of the narrative began, Edugyan says, as a fixation with the Jorge Luis Borges short story “The Improbable Impostor Tom Castro,” inspired by the real-life 1860s case. Roger Tichborne, the scion of an aristocratic English family, was shipwrecked off the coast of Rio de Janeiro. His mother denied his death for over a decade and, upon hearing he might be in Australia, began to post notices in search of him. She received a response from a butcher named Thomas Castro, claiming to be her long-lost son. Andrew Bogle, a Black man who had been removed from a Caribbean plantation to become a servant in the Tichborne household, was sent to Australia to verify Castro was indeed Roger Tichborne. Upon Castro’s arrival in England, Tichborne’s mother accepted him as Roger, but suspicion remained and Castro came to be known as the “Tichborne Claimant.”

“It was so outlandish I assumed [Borges] made everything up, including the character of Andrew Bogle,” says Edugyan, after researching the case. But she realized it was “impossibly real.”

“I was interested in the voice of Andrew Bogle and what was going on in his mind,” Edugyan says. “He’d been displaced in the world and brought to another, and his fortunes were tied up with this posh English family. That was the focus initially, then I abandoned the framework altogether – though maybe there’s the residue of Bogle in there.”

Patrick Crean, Edugyan’s Canadian publisher and founder of the HarperCollins imprint Patrick Crean Editions, says the runaway-slave narrative resonates widely, not only because the search for freedom is reflected in contemporary life but also because of the importance of diversity. “We’re in a time of radically rethinking who we are in the world,” says Crean. “Historical fiction isn’t just pure entertainment.”

Crean and Edugyan have known one another for years. The editor and publisher initially rejected Half-Blood Blues in late 2009, before it eventually landed at Key Porter Books. But the small Canadian publishing company went bankrupt before printing, at which point Crean – then publisher at Thomas Allen – was convinced to take a second look at the manuscript. “I had nobody,” Edugyan says. “It made the rounds again and everybody rejected it again. Patrick Crean finally had another look and took it on. It was shocking to me that [the book’s] fortunes turned around so dramatically.”

Crean, who acquired Half-Blood Blues (also shortlisted for the Governor General’s Literary Award and the Rogers Writers’ Trust Fiction Prize) before it was longlisted for the Booker Prize, has nothing but faith in Edugyan’s writing. Of Washington Black, he says she has written
a book that is rare because it combines a high literary quality with major commercial potential. “I do not say lightly that this will be a book that will be read two or three generations from now,” says Crean.

The novel has already received a starred review from the U.S. literary publication Kirkus Reviews. It will also be stocked at mega-retailer Costco – a balance that suggests Crean may be right about its broad appeal. Edugyan, however, remains anxious. “I don’t know that any literary writer can set out to publish a bestseller,” she says. “If I felt any pressure, it was the pressure I put on myself to write something I was happy with. The competition is always with myself.”

Washington Black is the first in a two-book deal Edugyan signed with Crean; she is currently at work on the next novel. She admits it’s difficult to write while promoting another project. “You’re emotionally unmoored, you’re all over the place,” says Edugyan. “For the longest time, I was just like, ‘What are people going to say about this book? Are they going to like it?’ I was going crazy. The only thing I could do was think that this book is part of a larger body of work that I’m trying to build, so I go to my desk and keep writing.”