As conversations about how we teach history in Canada – and who we celebrate – evolve and a critical eye is turned on the academic and cultural exclusion of women and racialized people, strong voices are entering the fray to help people discover fascinating figures who have largely been lost to history.

Enter Haley Healey and Kimiko Fraser, the writer/illustrator team behind Her Courage Rises: 50 Trailblazing Women of British Columbia and the Yukon (Heritage House, out now), a new nonfiction book detailing 50 incredible women from the history of Western Canada. Healey has a strong background in the subject, with two previous, critically acclaimed books profiling extraordinary women of Vancouver Island.

There are some essential, familiar names such as Emily Carr and Pauline Johnson in Her Courage Rises, but many more hidden gems, sorted into categories that include “miners,” “brave pioneers and homesteaders,” and “helpers and healers.”

Healey and Fraser spoke to Quill & Quire about working closely with the descendants of many of the women, not only to obtain consent to include their extraordinary ancestors, but also to access family photos and journals for many of the women who haven’t yet been celebrated enough to have archival collections. Healey notes that family interviews were one of her “favourite parts” of the entire writing process.

Each profile features a page-long text from Healey and an original portrait by Fraser, who found it challenging  “to boil [the women] down to just one image.” Fraser says that it was helpful having historical photos from the families to work with.

Many of the women are pictured with flowers, which allowed Fraser to explore her passion for the Victorian practice of floriography, where, she explains, flowers hold certain symbolic meanings. “For Kimiko Murakami, I did strawberries around the edges because apparently her strawberries were served to the king and queen … others were a bit trickier, but sometimes [families] would supply their family member’s favourite flowers. It was really nice to be able to include something that wouldn’t necessarily be written down in [a] historical record.” 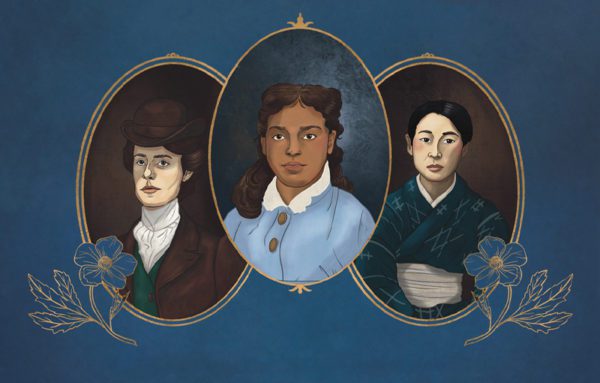 This extra-textual approach blended with rigorous traditional research allowed Healey and Fraser to create a fresh and unique historical document – one that not only gives fascinating detail, but manages to capture an ineffable humanity and relatability in even the most exceptional people profiled. This was an intentional aspect of the project – what Fraser refers to as a celebration of “extraordinary ordinary people” – and the personal passion that both Healey and Fraser brought to the work serves to animate the profiles.

Healey, an avid outdoor adventurer who recently became a parent, discussed how inspired she was by her research on mountaineer Phyllis Munday, an expert climber in an era when women were discouraged from most outdoor activities, let alone mountain climbing. Munday famously created a homemade carrier to bring her baby daughter along on hikes with her. “I just was so inspired that she didn’t stop going to the mountains, and she didn’t stop adventuring [after having children],” says Healey. She was also particularly fascinated and amazed by Lucille Hunter, who travelled a gruelling route to the Yukon while heavily pregnant, and went on to become a successful prospector and miner, one of very few Black women to do so.

In the same vein, Fraser wanted to show how the women’s “lives were similar to our lives now in certain ways … [balancing] their careers, their hobbies, their families.” The demands of motherhood and care work are presented side by side in the book with inventions, adventures, and fame.

For Fraser, Lilian Bland, who flew a plane she constructed out of “bamboo and linen, and an old beer bottle,” and Kimiko Murakami are personal favourites. Murakami was imprisoned during Canada’s forced internment of Japanese Canadians, made to live with her five children in unheated livestock buildings, and later to labour on a beet farm. The land her family had bought was stolen from them and never returned, but she rebuilt the family farming business on Rainbow Road in Salt Spring, BC, following the war. “She was resilient and interesting. And from the pictures it looks like she just had a brilliant laugh. I’m Japanese-Canadian [and Murakami’s story is] a history that you don’t always get to see.”

The idea of reaching young people in particular, who may still not see their identities represented in curricula, was especially important to the pair. They want to reach “anybody who’s not used to seeing themselves represented in history,” says Fraser. “To see your own story, your family story, reflected in history is really important, and can lead you down the path of learning more history.”