Whether it’s The Hunger Games or The Bones of Ruin, readers love a good book about supernatural tournaments. But a tournament around tea-making? In A Magic Steeped in Poison, Judy I. Lin combines her knowledge of ancient Chinese tea practices and her love of Asian period dramas to create a luscious, dangerous world.

A Magic Steeped in Poison (Feiwel & Friends, March) follows Zhang Ning through the Dàxī Empire to the capital of Jia. There, she competes against the kingdom’s greatest shennong-shi masters in a tournament of magical tea-making. If she wins, she can ask Princess Li Ying-Zhen to save her dying sister. However, winning the tournament will take more than a good brew.

Lin, a speculative fiction–lover, grew up with Eurocentric stories that never quite reflected her experiences. Diversity campaigns like #WeNeedDiverseBooks gave her hope that there was an audience for non-Western fantasy. Though Lin was cognizant of Western conventions while writing her debut, she utilized cultural elements familiar to her as a Taiwanese Canadian.

Diving into Chinese legends and poems helped her create the sense that Dàxī is bigger than what Ning sees. In particular, wuxia, a Chinese martial arts literary and drama genre, and xianxia, which adds the fantastical elements of gods and monsters to wuxia, were major sources of inspiration. “In terms of world-building, it was bringing in elements that I watched in the dramas and movies I grew up with,” says Lin, “but also discovering a lot of things about my own history and culture that I wasn’t aware of before, just because I didn’t have a lot of opportunities to do that [when I was] growing up in Canada.”

Creating her novel’s world required historical and cultural research, which Lin found both tricky and liberating. “Chinese history is so broad, and there are so many dynasties to explore,” she says. “There’s so much to draw from. So many centuries of history and knowledge and cultural influences.” 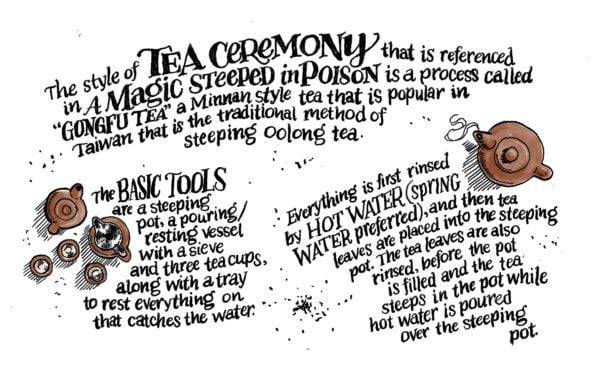 Tea, in Lin’s estimation, was something unique to her world. Its prevalence in daily life and the long history of traditional Chinese medicine was the spark that created Lin’s magical setting: “That’s something I haven’t seen in the other Chinese-influenced young adult novels I’ve read.”

Lin, who has poor vision, tends to borrow from her other senses to breathe life into her settings. By concentrating on what she hears, smells, tastes, and touches, she prioritizes sensory description in her writing, introducing her readers to a “world beyond sight.” While she typically starts with world-building, Lin takes character arcs very seriously. Ning, with whom she most identifies, is a character who pushes through constant self-doubt and weakness – and finally perseveres. 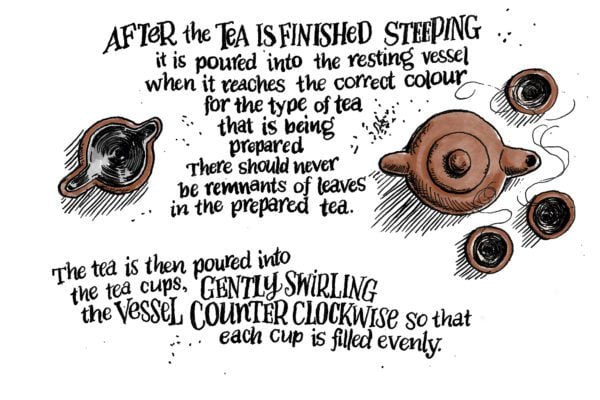 It is ultimately the characters that make a novel compelling. In A Magic Steeped in Poison, Lin wanted to focus on the power of strong female friendships. One key relationship in the novel is the bond between Ning, an impulsive farm girl who desperately wants to see more of the world around her, and one of her competitors, Luo Lian, a rich girl and the self-proclaimed “Tigress of the North.” Despite their very different backgrounds, once they move to the capital for the competition, they are both fish out of water, facing new dangers, treacherous schemes, and political intrigue.

In the capital, one must tread carefully; though court diplomacy restrains murderous impulses, danger is ever-present. That danger is also symbolic of growing up – and moving away from the comforts of home. “That was something I learned growing up in my home, being an immigrant and moving from Taiwan to Canada, then moving away from Canada [to the United States].” Lin wanted to weave her own experiences into Ning’s coming-of-age narrative, showing how perception changes as you grow older and encounter new things.

Lin is proud to be named alongside the Asian YA writers who inspired her, like Elizabeth Lim, Joan He, Julie C. Dao, and Cindy Pon. As she tells Quill & Quire, she would love to write more Chinese-inspired historical fantasy, especially in the xianxia genre, where immortals and celestials rule. As a fan of horror, she’d also love to see more Chinese-inspired horror in the young adult market – including, perhaps, books set in Canadian cities. The important thing is to have books that reflect the experiences and desires of those historically left out by the publishing industry. Lin guesses that, if these books had existed when she was a teen, she would have written fantasy earlier. What she had to choose from was largely American contemporary high school novels or adult fantasy. There were few epic fantasy books for young people then, especially with Asian influences.

With A Magic Steeped in Poison, we can add Judy I. Lin to the list of authors writing YA fantasy to fill that glaring gap and inspire a whole new generation of youth.