It was an offhand comment in a creative writing class, of all things, that led Jessica Johns to write her first novel. While completing her MFA at the University of British Columbia, a faculty member told her class to never write about their dreams. “He said, they’re boring, no one cares about them,” Johns remembers, “and I was enraged.” Cree people take dreams seriously as a form of knowledge production and a method of communication with their ancestors. To see them dismissed as fundamentally unserious and unworthy of literary consideration was a challenge that Johns couldn’t ignore. You can say this about Cree people: we can be pretty intense.

“I decided, I’m going to write this story that’s going to be engaging, and exciting, and validate dreaming as an important thing that happens to people, Cree people in particular,” said Johns, a member of the Sucker Creek First Nation. Though she had entered the program with a different thesis project in mind, she began working on a new tale about dreams, grief, family ties, and the lingering trauma of settler colonialism. The resulting short story, “Bad Cree,” was published in 2019 by Grain magazine and won the 2020 Writers’ Trust Journey Prize. But the idea lingered, like a recurring dream. “The characters kept me up at night, banging on my door,” she explains. “I knew there was more to this story. It wasn’t done yet.” She expanded it into a novel of the same name that will be published by HarperCollins on January 10. 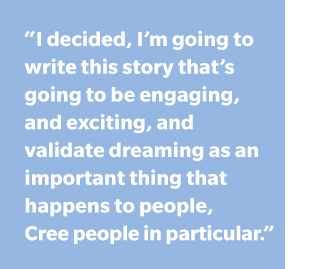 Speaking on a Zoom call from her home in Edmonton on a late November afternoon, her cat Alfredo eluding the camera, Johns describes writing as a lifelong passion. Technically, her first book was written long before Bad Cree – she penned and illustrated a story about a dinosaur when she was nine. “I was very proud of it,” she says, laughing. But growing up in blue-collar rural Alberta, on her traditional territory in Treaty 8, the idea of being a professional writer seemed unattainable. “I didn’t grow up knowing writers or artists,” she says. “It didn’t feel like a possibility as a career path.” Instead, she majored in English at Grant MacEwan University and planned to go into academia. But in her last year, the university introduced creative writing classes, and Johns enrolled in two courses taught by author Jacqueline Baker. “It changed everything for me,” she said. “I saw this other life.” With Baker’s encouragement, Johns applied to the MFA in Creative Writing at UBC with “the thinnest portfolio I’ve ever submitted anywhere,” and was accepted.

Initially, Johns was intimidated by Vancouver’s literary scene, and her peers, who seemed to already know how to navigate it. Her program was filled with writers who aspired to produce literary fiction, but Johns was interested in writing the kind of genre fiction she had grown up reading. “I’ve always loved horror and fantasy, but in a university setting, if you want to be a serious writer, those are frowned upon.” It wasn’t until she started working on the story that would become Bad Cree that she shed those inhibitions and, in the process, found her voice as a writer. “I was learning a lot of great things during my MFA, but also I learned a lot of things about craft that were very colonial. There were Western ways of storytelling that I had to unlearn.”

The bad Cree of the title is Mackenzie, a downtrodden millennial bagging organic groceries at Whole Foods. Instead of a gothic mansion, Johns opens her ominous, haunting novel in a crumbling Kitsilano apartment where Mackenzie lives like a ghost, “as small and quietly as I can,” awaiting an inevitable demoviction. But recent nightmares about her sister Sabrina, who died suddenly the year before, are beginning to bleed into reality in terrifying and unpredictable ways. The inescapable terror of her permeable dream world compels Mackenzie to return home to her family in High Prairie, from whom she has been estranged since the death of her beloved kokum, and seek their help to unravel the meaning behind her dreams before it’s too late.

The set-up of Bad Cree is a classic horror novel: an unravelling protagonist, a supernatural threat, a simmering repressed trauma. But these familiar elements are transformed into new, surprising forms through the vivid cultural specificity of Johns’s Cree worldview. Except for Mackenzie’s ebullient Squamish friend Joli, the novel is populated entirely by Cree women, whose relationships defy genre conventions. “It’s a common trope in horror that when people see ghosts or something supernatural happens to them, the people around them don’t believe it’s happening,” Johns explained. “But Mackenzie is believed right away. I wanted to show the cultural truth around that; if I were Mackenzie and I told my mom this, she would believe me.” Set in the sprawling, plundered northern Alberta landscape of Johns’s childhood, the land itself roots the story in place, as distinct and alive as any of her characters, and as haunted.

Though Mackenzie is stalked in dreams by a supernatural entity, her isolation from her family and community is the greater threat, and the rift she needs to heal in order to survive. Johns rejects the genre convention of the lone survivor, opting instead to explore the power of interdependence and kinship. In the process, she traces a tender narrative of grief and guilt, of the inescapability of trauma, and the promise of healing. With Bad Cree, Johns demonstrates that it’s possible to craft a bone-chilling novel that has, at its core, a warm, beating heart.