The list of poets who have made the leap to become successful novelists is robust: one thinks immediately of Margaret Atwood, Michael Ondaatje, Gary Barwin, Patrick Lane, Michael Crummey, and Leonard Cohen (briefly). The writers who go in the opposite direction – moving from novels to verse – are less common. Austin Clarke published his first collection of poetry, Where the Sun Shines Best, in his 70s. This fall, Megan Gail Coles will follow her Scotiabank Giller Prize–nominated debut novel, Small Game Hunting at the Local Coward Gun Club, with a debut collection of verse. And in April, Vancouver’s Jen Sookfong Lee makes the jump from prose to verse, releasing her first book of poetry, The Shadow List, with Wolsak and Wynn imprint Buckrider Books.

Lee has already enjoyed success with her Chinatown trilogy of novels set in the eponymous Vancouver neighbourhood – The End of East (2007), The Better Mother (2011), and The Conjoined (2016). In 2017, she also published Gentlemen of the Shade, a well-received critical reassessment of Gus Van Sant’s cult film classic My Own Private Idaho. As for why she decided to switch gears at this point, Lee is rueful in her response: “Somebody actually said to me, ‘Are you just tired of making money?’”

In one sense at least, the publication of The Shadow List marks not so much a departure as a return for Lee. In the late 1990s, Lee undertook an MFA at Concordia University in Montreal, where she worked on a collection of poetry as her thesis. “That particular program actually kind of killed my desire to write,” she says. “I didn’t write poetry for at least 15 years. I didn’t write anything for about two years after that, until I started writing fiction.”

The trials of the MFA had little to do with the rigours of writing poetry and more to do with the nature of creative writing classes at the end of the 20th century. “MFA programs back in the day were not particularly accommodating for people of colour or any marginalized group,” she says. “It was very white and very elitist.” Lee eventually dropped out of the program and avoided returning to the literary form that reminded her so much of her largely negative experience.

So, what changed? Lee says that after writing three novels in a relatively short span of time, she was looking to work on something a bit less cumbersome. “Novels take up so much headspace; there’s so much to consider in a novel. I just wanted to write things for myself,” she says. Lee was also a single mother raising a young son and the free time she had available to her was unpredictable and fleeting, so she reached for a form she could pick up in short bursts between work and parenting. By the time she realized she had enough material to make up a book, Lee had started to consider her return to poetry a kind of homecoming.

It’s a sentiment shared by Paul Vermeersch, who acquired The Shadow List for Buckrider and served as Lee’s editor. “Jen Sookfong Lee was no newcomer to poetry. She started with poetry,” says Vermeersch. “This was not some dilettante trying something out to cross it off her bucket list.”

That shows in the finished work, a suite of sometimes brutally honest lyrics that address subjects such as motherhood, breakups, desire, and anxiety. Perhaps unsurprisingly, given Lee’s extended hiatus as a novelist, the poems in The Shadow List are tightly concentrated narratives that dissect their subjects with an almost surgical precision.

“There’s often a really interesting thing that happens when people who are more accustomed to writing fiction write poetry,” says Vermeersch. “For obvious reasons, they’re attracted to the narrative poem, but everyone approaches narrative in their own way.”

Vermeersch describes the editing process with Lee as a progression of discovering techniques to present the various narratives in a different manner, based on compression and a resolute focus on the line as a unit of meaning – fortuitously, the same emphases that drew Lee to the form in the first place all those years ago. “The smallness of a poem and the limits of the space really attracted me back then, and it still does now,” Lee says. “It’s kind of a jigsaw puzzle for me: how can I say these things that I want to say with these limits that I’ve given myself?”

The things that Lee wants to say are frank and frequently uncomfortable. “In grade nine you wrote in your diary, I hate my face, / and meant it,” Lee writes in “But the Muscle Memory.” “You learned / that your mouth was your best feature and that your bony hips / could be hidden by the right dresses / if the lighting was good.” Or this, from “Five Breakups with the Same Man”: “During sex, he said he loved you. / You pretended not to hear him, went home, / and he didn’t call for six months.” 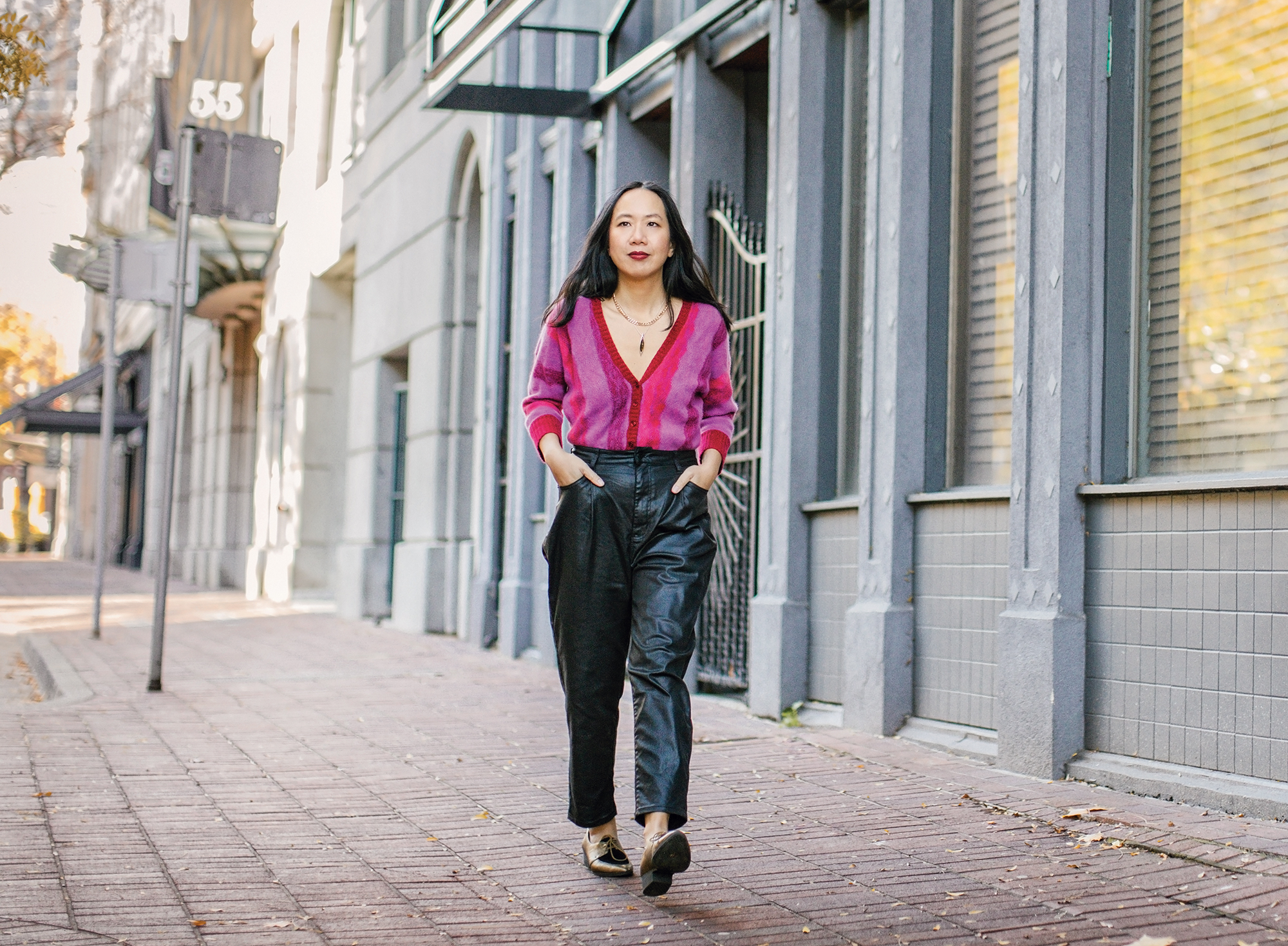 The poems in The Shadow List present a female speaker who is explicitly flawed and unsure in places; she expresses anxiety over relationships and her response to motherhood: “Your son coughs in his sleep and that’s your heart jumping. / Fuck that thing. Fuck your unreliable heart.” For the poet, this manner of presentation was important for the way it allows the specific speaker to exist in her full humanity. “I started thinking about Asian female writers and I started thinking, When have we ever been allowed to be messy in our writing?” Lee says.

One touchstone for Lee while writing the poems was Elizabeth Smart’s novella By Grand Central Station I Sat Down and Wept, which focuses on a protagonist Lee refers to as “hella messy.” “It became kind of a political experiment for me.”

The politics of Asian women’s writing – and minority writing in general – has never been far from Lee’s thinking. She is well known in CanLit circles for her advocacy for traditionally underrepresented voices and her championing of diversity initiatives throughout the literary community and the publishing industry. Lee extends this activity further in 2021 with the publication in March of her children’s book Finding Home (Orca Book Publishers) and her new role as acquiring editor at ECW Press, which she begins in July.

But while she admits that on one level all writing is political, she also sees a kind of separation between her activism and her imaginative practice. “I always come to my writing with a socio-political thematic thread, and that always plays into the beginnings of a project for me. When I’m in the middle of the writing, that socio-political purpose falls away a little bit because I’m interested in the story and the words and the characters.”

As for those characters, it is axiomatic for critics to avoid assuming that the speaker in a poem is the author, but Lee is plainspoken in admitting that much of her writing is veiled autobiography. “When I wrote The End of East, which is based on my family’s immigration story, I was really afraid that people would make the connection that I was taking my family’s story for inspiration,” Lee says. “It’s been 20 years and I don’t care anymore.”

Formally, the poems in The Shadow List comprise what might loosely be described as confessional poetry, a loaded term in some respects as a result of gendered assumptions that are often applied to it (see p. 17). While she does not dispute the term confessional, Lee does acknowledge the sometimes problematic ways that formulation gets applied to women writers, and more particularly to women writers of colour. “I really do think this is true for women of colour, for Asian women: we’ve always been slotted into confessional or intergenerational or domestic writing,” she says. “At the end of the day, it doesn’t matter what you’re writing: you are always accessing the self in order to access your human characters. We’re all using things we’ve lived and experienced. So confessional to me means literally nothing.”

Regardless of what term is applied to her collection, it is the honesty in the poems that provides their emotional engine. Notwithstanding how close to the bone these poems cut, Lee is unconcerned about revelations in her work making their way out into the world. “Maybe I’m a bit of a psychopath,” she says. “Honestly, the separation between self and author or self and narrative is not something I’m interested in.”

In fact, it was the very rawness of the material that argued for its presentation in the form of poetry. Unvarnished emotion is easier to access in poetry than in prose, Lee suggests, in part because the latter requires so much extra material in the way of context, setting, and character development. The process of stripping those things away for the poems allowed Lee to access the honest emotion more readily and more directly. “Poetry is an inherently linguistic form in the sense that you’re very concerned about each and every word,” she says. “For me, having that interplay of linguistic experimentation and emotional honesty can express the complexities of the emotion in ways I could never do in prose.”

The Shadow List is appearing under the ongoing constraints of COVID-19, which means that Lee will not be able to tour with it or meet her readers, which she says is one of the most gratifying aspects of being a writer. Plans are in the works for a virtual launch, but how does the author hope the book will be received? “My expectations are actually very low,” Lee says. “I would really love it if people read the poems and felt some kinship with my speaker. That’s what I would like.”