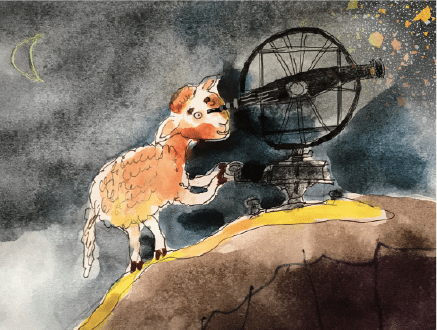 After years of shepherding other people’s books into the world, Running the Goat, Books and Broadsides publisher Marnie Parsons has a story of her own to tell. This April the author releases PB’s Comet (with illustrations by Veselina Tomova), her debut children’s book about an astronomy-obsessed young ewe named PB and her attempts to make a stargazer out of a grumpy old billy goat. “It’s inspired by two of my favourite things about the place where I live,” says Parsons, a resident of Tors Cove, Newfoundland. “There are sheep on the islands in the summer and Edmund Halley came here in the 1700s.”

Halley’s visit is the stuff of local legend in Tors Cove, commemorated on plaques around town. Parsons relates how a storm forced the astronomer to dock temporarily in what was then Toads Cove, only to be shot at by fishermen who thought he was a raiding Frenchman. (Relations between the French and English were tense at that time, to say the least.) “I love to look out the window,” says Parsons, “and wonder where his ship was and what it looked like.”

Parsons has a background in children’s literature, having studied it extensively and taught courses in the subject, as well as writing about and reviewing kidlit for many years. She also has edited the work of Running the Goat authors, including local Newfoundlanders Andy Jones and Tom Dawe, since the press’s launch in 2000. Her expertise is on full display in the lilting tone and traditional narrative feel of PB’s Comet. Indeed, the imperative to read the story aloud is almost irresistible.

Sheree Fitch, whose picture book Polly MacCauley’s Finest, Divinest, Wooliest Gift of All, published with Running the Goat in 2017, attributes this readability to Parsons’s deep understanding of traditional and oral story-telling, and her commitment to regional stories. “She’s preserving a certain kind of tale and narrative that’s really contributing to not just Newfoundland culture and Atlantic literary culture but also to the storytelling tradition that we all come from,” says Fitch. “It makes us listen differently, hear differently, think differently, and it makes us imagine in a more gentle way. I’m in awe of her and the kinds of books that she chooses to put out there.”

PB’s Comet boasts plenty of local flavour – including references to fishing boats and landmarks – related in a jaunty, East Coast twang. But it still feels open and accessible to readers across the country, which Parsons says is a happy consequence of telling the tale rather than a calculated effort to boost the book’s marketability. Still, she admits that the planned initial print run of 2,000 and hopes of distribution in major chains – are based on the book’s wide appeal.

No matter the reach, Parsons has already reaped benefits. “I really enjoy writing,” she says. “But most of the writing I do these days consists of marketing materials and catalogues and grant applications. It was nice to write something fun.”