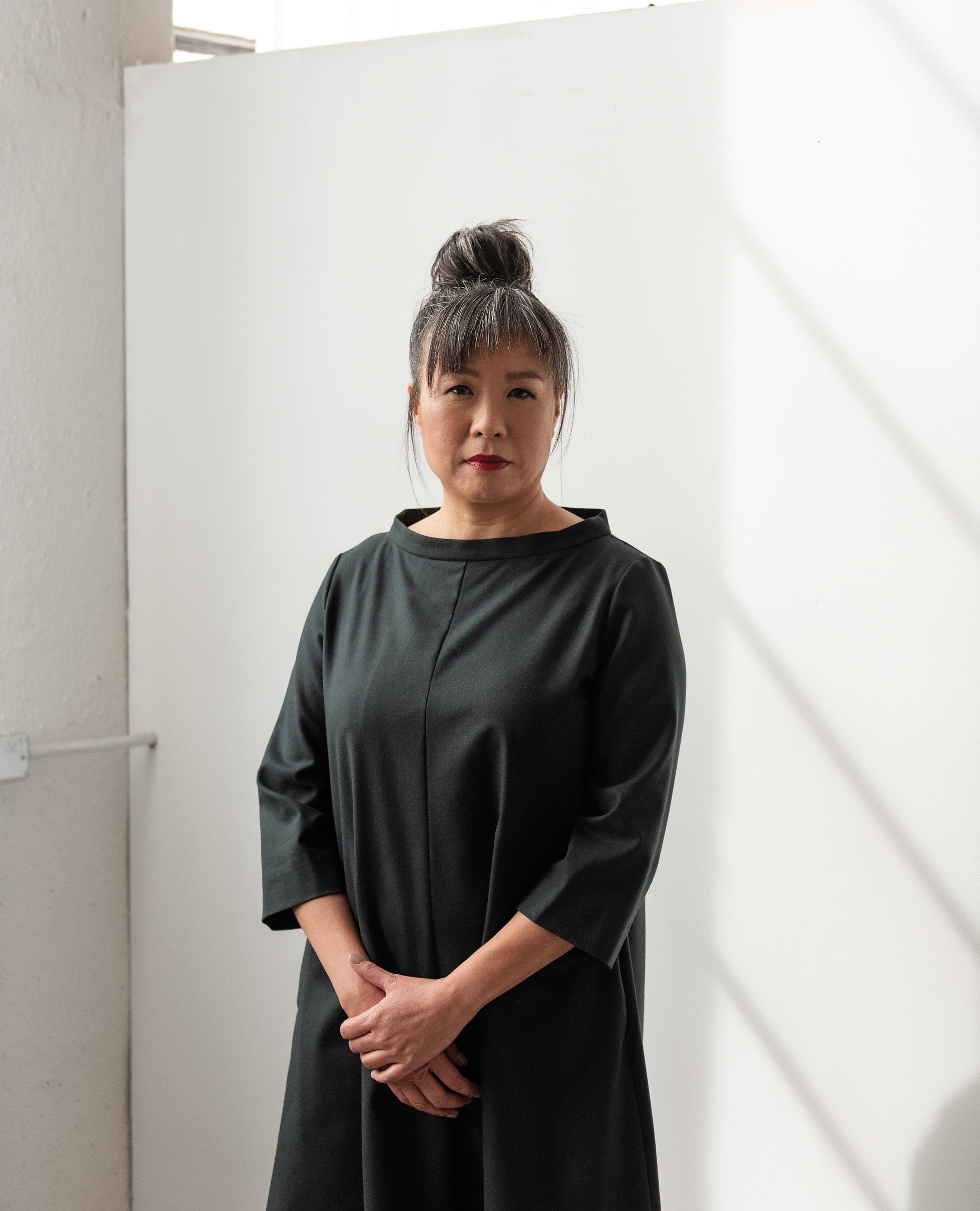 Larissa Lai is having a moment.

“I’m feeling a bit like a deer in the headlights,” she says, laughing on the phone from her home in Calgary. Lai’s latest novel, The Tiger Flu, recently published with Arsenal Pulp Press. “I’m excited, obviously, and also there’s this feeling of relief that it’s finally out in the world. But with the relief there’s also this sense of amazement that it’s done. For me it carries a sense of something major coming to fruition – it feels like a big life turn.”

That, she says, is due in part to the amount of time it took to get The Tiger Flu into the world. Lai’s previous novel, Salt Fish Girl, was published in 2002. Her debut, When Fox Is a Thousand, first published in 1995, was reissued by Arsenal Pulp in 2004. “It was such a different experience writing those first two novels,” she says. “There was an openness and a willingness to free-fall that I miss. This has been a fundamentally different experience in writing.”

Composing her new novel was a long process, fraught with false starts and a manuscript that at one point ballooned to more than 500 pages. During the writing of it, Lai published two poetry collections, a number of chapbooks, and a book of criticism, all while teaching in the English department at the University of British Columbia and then at the University of Calgary, where she conceived and now directs The Insurgent Architects’ House for Creative Writing, known as TIA House.

The Tiger Flu follows two main characters: Kora Ko, a young girl trying to protect her family from an epidemic, and Kirilow Groundsel, a doctor from Grist Village, a community of women who have been genetically engineered to reproduce without the need of men. The novel grew out of a 2010 short story titled “The Starfish Groom” that was published in a special issue of the now-defunct queer literary magazine Chroma. The story envisions a post-apocalyptic, biopunk Vancouver, now known as Saltwater City, where a virulent epidemic illness has wiped out a large swath of the population.

Avian flu had hit the world around the time that “The Starfish Groom” appeared in print. “There was a lot of coverage [of the epidemic],” Lai remembers. “There was a great deal of association of Asian-ness with contagion. Though a novel is a place for story, not analysis, I wanted to nod to that real-life event and popular thinking around it.”

Both The Tiger Flu and Salt Fish Girl make use of clone figures; in both books, these clones – and human reproduction in general, with a focus on racialized working people in particular – are closely tied to capitalist economics.

One long-time influence on Lai’s fiction is the social speculative fiction of the 1970s – writers like Joanna Russ and Monique Wittig. “Some of these books read as dated now in their overt disparagement of men but also as hilarious and charming for exactly that same reason. The Tiger Flu is my conversation with these books, with this question of how we look to build a better world – specifically, a world of women.”

As it turns out, Grist Village is far from a utopia. Peopled by mother-doubles who give birth to cloned litters of girls and starfish women who can regenerate their own limbs and organs, the colony is rife with political scheming and squabbles. When Peristrophe – Kirilow’s lover and the last starfish of the colony – dies and Saltwater City’s army comes to take the remaining cloned Grist sisters away, it’s up to Kirilow to journey to Saltwater City and find a new starfish in order to ensure her village’s survival.

It’s a tantalizing novel, replete with the kind of detail that recalls the world of Margaret Atwood’s Maddadam trilogy yet belongs to another territory entirely, thrillingly its own. (Salt Fish Girl, though less broadly circulated, was published the year before Oryx and Crake.) With Atwood you’re in a world that’s odd but recognizable, whereas with Lai, you’re in a world that’s completely strange – until it shocks you with a flash of the familiar.

This, of course, is what speculative fiction is all about: that ability to get to the heart of the real world through an imagined door.

“People travel much farther with you,” Lai notes, “when they don’t feel that the finger is being pointed at them. If you talk to people directly, they often tell you to go away. But if you start to tell them a story, they invite you in and listen.” She is especially cognizant of speculative fiction’s ability to make use of allegory – and then, when the allegory inevitably breaks down, she brings the essential strangeness of her figures into relief.

The realms of spec fic, fantasy, folk tale, and science fiction have always held appeal for Lai, starting from the Andrew Lang fairy books she read as a child. In the 1990s, as a young writer building community for herself and others in Vancouver, she read Angela Carter, Ursula K. Le Guin, Octavia E. Butler, and the like. She has taught at the Clarion Writers’ Workshop in the U.S. and attended international SF/F conferences. It’s also a genre that has nurtured its own community in ways that to some extent match how the Asian-Canadian community has nurtured its own members. Lai is clear that genres and racialized peoples, while their communities may have parellels, are not products of the same historical forces, though they can intersect in generative ways.

The early 1990s was in many ways a pivotal time for those writing on the margins. In 1993, The Writers’ Union of Canada’s Racial Minority Writers Committee (as it was called then) organized the Appropriate Voice conference, where Lai met fellow writers Lenore Keeshig-Tobias, Ayanna Black, Rita Wong, Hiromi Goto, Roy Miki, and Daniel David Moses. In 1994, there was the Writing Through Race conference, which engendered both controversy and closeness. (Jan Brown, a Reform Party MP, successfully petitioned to have the $22,500 Department of Canadian Heritage grant given to the conference rescinded on the basis that the gathering excluded white writers.) The engagements with speculative fiction that began to crop up in the writing of Lai’s fellow novelists in the years since those two conferences – for example, Goto’s Hopeful Monsters, Wayde Compton’s The Outer Harbour, and Cherie Dimaline’s The Marrow Thieves – seem to speak to a sense of excitement within the CanLit community, a sense of words and worlds colliding to create something invigorating and new.

Writing Through Race helped to cement what Lai calls “a really vital, if contentious, community in those days. It was very difficult on all kinds of levels but really important and world shifting for me.”

It’s a world shift that has carried through in both Lai’s work on the page and her work in the community at large. As the director of TIA House, she has been diligently building community among emerging and established writers for the last four years. She sees her work with TIA House as integral to the process of writing, both for herself and for the other writers who partake in these conversations.

“The work [Larissa] does in imagining other futures is actually a realistic vision of the murkiness of human relations,” says Goto, who edited The Tiger Flu. “I see echoes of this understanding at work in TIA House. There’s a curatorial and community process at work there, bringing together writers and artists to imagine with, across, together, and apart toward a shared future. I see Larissa being a part of a movement that doesn’t passively wait for the future to arrive. She is doing her part to make it a better shared future for us all.”

What might such a future look like for those of us in the decidedly murky world of CanLit? “I do think some of the work that my generation and earlier generations did is bearing fruit,” Lai says. “We need to recognize that marginalized groups have been profoundly silenced, [but also] recognize the new voices of community that are here and doing the work of rebuilding a more just and whole world.”

In that sense, The Tiger Flu – with its explorations of a new generation rising up to save a world veering off course – is in many ways the novel CanLit needs, written in exactly the mode that it requires. While realism still has a prominent place in much of the country’s literature, writers like Lai are forcing the literary community to wake up to the possibilities inherent in different ways of telling stories.

“[When you leave] verisimilitude behind, sometimes you can get at emotional or social truths that are harder to reach within the limits of the realist vein,” says Lai.

From the upheavals of U.S. politics to the dizzying speed of the internet and social-networked life, much of our “real world” occupies a place that would once have been too strange for any genre other than speculative fiction. Given our current political and social climate, the time seems right for a novel that celebrates the strange and unfamiliar. As the work of imagining new forms of literature continues, The Tiger Flu embraces that sense of unfamiliarity in the voice of one of Canada’s brightest world builders.