These days Rita Wong isn’t writing poetry. Poetry has come to her in waves at different points in her life – fitting for a poet who has written so much about water.

It covers three collections: monkeypuzzle (1998); forage (2007), winner of the 2008 Dorothy Livesay Award and special poetry edition of Canada Reads in 2011; and undercurrent (2015). It also draws from her collaborative projects sybil unrest (2008) with Larissa Lai, which began during SARS and the U.S. invasion of Iraq as a “refusal to be utterly defeated”; perpetual (2015), with artist Cindy Mochizuki about protecting water in British Columbia and Alberta; and beholden: a poem as long as the river (2018) with poet Fred Wah, for which they traversed the Columbia River from the headwaters to the mouth and composed a 137-page handwritten text.

While Wong’s poetry is politically charged and ecologically driven, there is also a great sense of play and humour – from wordplay in her collaboration with Larissa Lai (“shrinkwrapped pushy / condemns on sale / dill pickle harmless / let her strap on / law’s garters”) to literary allusion (“so much depends on a thin iron wok,” from “value chain” in forage, a reference to the William Carlos Williams poem “The Red Wheelbarrow”), or her subversions of the English language through punctuation and grammar choices. Although Wong has a bodily memory of her mother tongue, Cantonese, she is most fluent in English, so she listens to English with a very careful ear. “It’s good to be playful with it, or not take it too seriously,” she says. “At the same time, I take it very seriously.”

Though Bradley acknowledges in the introduction to Current, Climate that it’s unusual to include multi-authored works in a selected, he writes, “Wong is fundamentally a dialogic poet.” This dialogue extends beyond her work to her relationships with mentors and influences.

“There’s a whole generation ahead of me who made writing not only seem possible but also created a sense of community around it – just through their very existence.” She’s referring to such writers as Lillian Allen, Dionne Brand, SKY Lee, jam ismail, M. NourbeSe Philip, Fred Wah (who taught Wong at the University of Calgary), and Roy Miki (who supervised her PhD dissertation at Simon Fraser University). When Lee Maracle spoke about colonization at the Women of Colour Collective in Calgary in the ’90s, Wong says a light bulb went on in her head, setting her on her current path. In terms of her own peer group, writers such as Larissa Lai and Hiromi Goto have been cherished friends, co-readers, and co-authors who provide mutual support.

Much of Wong’s work is also a response to the call from Dorothy Christian, Simon Fraser University’s associate director, Indigenous Initiatives, “to protect sacred waters.” Wong took up the invitation to think about water and to reciprocate what water gives us, which is life. In addition to her poetry books on water, Wong has developed a humanities course at Emily Carr University of Art & Design on cultural and ecological perspectives on water with the support of a fellowship from the Center for Contemplative Mind in Society. Wong and Christian also co-edited the anthology Downstream: Reimagining Water (2017), which explores water ethics from “local, global, and Indigenous perspectives.” This project culminated in an event at Emily Carr that brought together elders, artists, writers, scholars, environmentalists, and activists. “I’m doing the work I’m doing because of Dorothy,” Wong says.

Wong’s love, respect, and care for water has not only led her to write about it but also to defend it. Although Wong didn’t come from a politically active family, politics found her. She was born and raised in Calgary, on the traditional territories of the Niitsitapi (Blackfoot), Tsuut’ina, and Stoney Nakoda First Nations, in Treaty 7 territory. Her parents immigrated from Hong Kong and operated a grocery store that she writes about in “sunset grocery” from her first book, monkeypuzzle. Many of the poems in this book were written while Wong was teaching English in China, including the poem, “lips shape yangtze, chang jiang, river longing,” which opposed the Three Gorges dam:

i look for the big sky
but clouds suffocate me
rain defeat for the dispossessed.
families pushed out of homes,
mouths gaping hunger.
stone soup, stone face,
cracking as earth reveals herself through us

When Wong returned to Canada, she started speaking to the Chinese media in Vancouver about her opposition to the dam. “Poetry led me to what I needed to do in my life to live with myself and live honestly.”

Wong’s commitment to living honestly has helped fuel her fight for affordable and accessible education, refugee rights, anti-racism, decolonization, and the protection of trees and water in Alberta and British Columbia. Since 1994, Vancouver has been her home, on the unceded territories of the xʷmǝθkʷəy̓əm (Musqueam), Sḵwxwú7mesh Úxwumixw (Squamish), and Səl̓ílwətaʔ/Selilwitulh (Tsleil-Waututh) Nations.

When Wong first started getting involved in public action, she recalls her friend, the late poet Claire Harris, telling her, “Don’t let them call you an activist because it means you have to do all the work and they don’t.” At the time, Wong wasn’t concerned with what she was called -– the work just needed to get done. She later understood the wisdom in this advice. Today Wong describes herself as someone who was born into a situation where she has to respond and act. Circumstance has carved her path, along with her desire to respond from “a place of love, a place of compassion, and a place of care.” 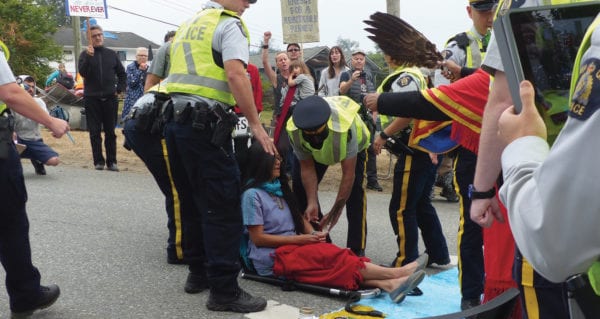 In recent years, Wong’s attention has been focused on supporting communities trying to stop the Trans Mountain Pipeline expansion (TMX) and the Site C dam. The federal government purchased TMX from Kinder Morgan in 2018, the same year the UN’s Intergovernmental Panel on Climate Change (IPCC) released a report warning the world that we had until 2030 to reduce carbon emissions to prevent catastrophic global warming. The controversial pipeline will transport diluted bitumen from Edmonton to Burnaby. Indigenous land and water defenders, environmentalists, and activists are opposed to this project for its devastating impact on communities, land, water, and species. In 2018, Wong participated in a peaceful land protection ceremony at the Westridge Marine Terminal in Burnaby and was arrested for breaching a Supreme Court injunction preventing land defenders from blocking TMX construction. A year later, she was sentenced to 28 days in jail. Wong published the essay “Lessons from Prison: A Shackled Pipeline Protestor Reflects” in The Tyee in 2019, included in the 2020 anthology Watch Your Head: Writers and Artists Respond to the Climate Crisis (which I edited). Wong writes:

I got arrested because we’re in a climate emergency. We are in imminent peril … We are losing species at an alarming rate and many face mass extinction due to the climate crisis that humans have caused. This is the irreparable harm I sought to prevent, which the court, the Crown, and corporations also have a responsibility to prevent.

Wong was moved by the support she received during her incarceration from people all across Canada and the U.S.; the writing community, including Talonbooks, which posted her statement on its website; her friends, who started a legal fundraiser; and her colleagues at Emily Carr, where she’s an associate professor of critical and cultural studies. “I’m only one of hundreds of people who have been arrested there.” She mentions that even on the morning of our interview, another land defender, Will George of the Tsleil-Waututh Nation, was facing a charge. These arrests are not always in the news, she says, but they are still happening, and the resistance to the pipeline continues.

For the past five years, Wong has also been steadily opposed to BC Hydro’s Site C dam, a megawatt hydro dam on the Peace River in northeastern British Columbia where 5,500 hectares will be flooded in violation of First Nations rights in Treaty 8 territory, destroying burial grounds and traditional hunting and fishing. Over 100 species vulnerable to extinction will be impacted, farmland will be wiped out, and there are growing geotechnical and safety concerns. “The Site C dam and hydro dams in general are being chosen by the federal government as some sort of green climate solution,” Wong says, “but a climate solution doesn’t destroy the very things you need to protect.”

Though Wong is not writing poetry these days, she’s writing essays and press releases, and she’s showing up at the B.C. Supreme Court to watch, as she describes in the afterword of Current, Climate, “millions of dollars being wasted as well-funded crown prosecutors work with the RCMP and Trans Mountain Pipeline security to put on trial and incarcerate Indigenous land defenders.” Ecological grief and the violence, racism, and colonial occupation she is witnessing have moved her energy away from poetry and directed it toward collective action.

There are so many talented new poets out there, Wong says, and right now she’s enjoying reading and listening to them. “Obviously, poetry is precious to me. It’s good to know I can return to it, and it’s always somewhere in me even when I’m not actively writing it.” She hopes her work will be a vehicle to inspire others. “I write because other people have written, and so I hope to help people get where they need to go.”

Kathryn Mockler is the author of four books of poetry and publisher of the online climate journal Watch Your Head.