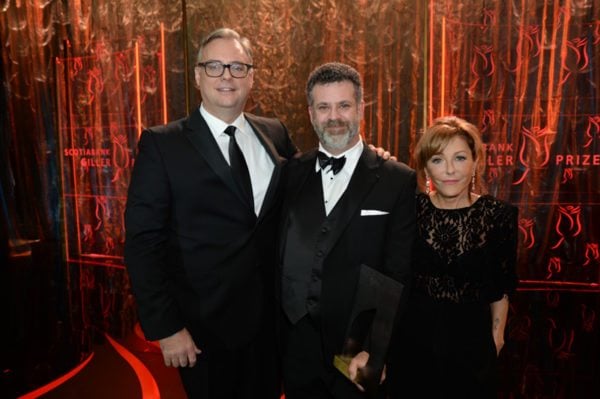 In 2001, Michael Redhill walked onto the prestigious Scotiabank Giller Prize stage as a finalist, for his debut novel Martin Sloane. Sixteen years later, on Nov. 20, he was declared winner of the $100,000 prize, for his literary thriller Bellevue Square, published by Doubleday Canada.

An emotional Redhill thanked his publisher, editor, funders, and family, quipping that he must be in a coma. He also thanked Michael Ondaatje and Linda Spalding, with whom Redhill worked closely as former publisher of the literary journal Brick. “I’m grateful for the enthusiasm and encouragement they brought to my life.”

In their citation, this year’s Giller jury – Anita Rau Badami, former Giller winners André Alexis and Lynn Coady, British writer Richard Beard, and American writer Nathan Englander – lauded Bellevue Square for its literary complexities and explorations of family, community, mental health, and literary life: “Beyond the mysterious elements, this novel is warm, and funny, and smart. Let’s celebrate that it is, simply, a pleasure to read.”

The other finalists for this year’s prize, each of whom received $10,000, were Rachel Cusk for Transit (HarperCollins); Ed O’Loughlin for Minds of Winter (House of Anansi Press); Eden Robinson for Son of a Trickster (Alfred A. Knopf Canada); and Michelle Winters for I Am a Truck (Invisible Publishing).

The evening began on an emotional note with a standing ovation in honour of prize founder Jack Rabinovitch, who died on Aug. 6. Giller executive founder and Rabinovitch’s daughter Elana Rabinovitch addressed the crowd of 500 at Toronto’s Ritz-Carlton Hotel ballroom, sharing her personal grief and hopefulness with a quote from Ondaatje’s 1987 novel In the Skin of a Lion: “Trust me, this will take time but there is order here, very faint, very human.”

Canadian soprano Measha Brueggergosman performed a musical tribute accompanied by photos of Rabinovitch with friends, family, former award winners, and his late wife, Doris Giller, for whom the prize is named.