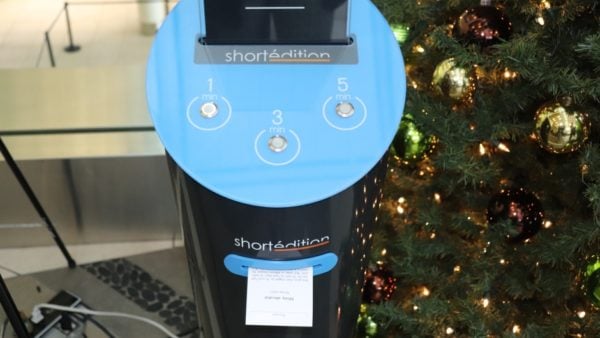 Waiting in line at the Edmonton International Airport just got a bit less boring thanks to the recent addition of a short story vending machine. With the punch of a button on the Short Story Dispenser, weary travellers can select a free one-, three-, or five-minute read by a local author, which is printed on a “papyrus” – a small scroll of paper much like the receipt you get from an ATM.

The machine is the creation of French startup Short Edition, which has placed 150 Short Story Dispensers in cafés, schools, and public venues since the company’s founding in 2011. The Edmonton machine is only the second in an airport, however, with the first being at Lyon–Saint-Exupéry Airport in France.

Edmonton writer Jason Norman brought the Short Story Dispenser to the attention of the Edmonton International Airport and worked with Traci Bednard, vice-president of digital strategy for the airport, to have one installed. In keeping with Short Edition’s own ethos of promoting local storytellers, Norman – editor and publisher of 40 Below, an anthology of original works inspired by Edmonton winters – pushed to have the machine produce short fiction by local authors.

“The feedback has been outstanding,” Bednard told CBC Radio in a segment on Spark with Nora Young. “Passengers like the idea that they can self-serve stories from a machine and recognize that they’re consuming the work of a local artist.”