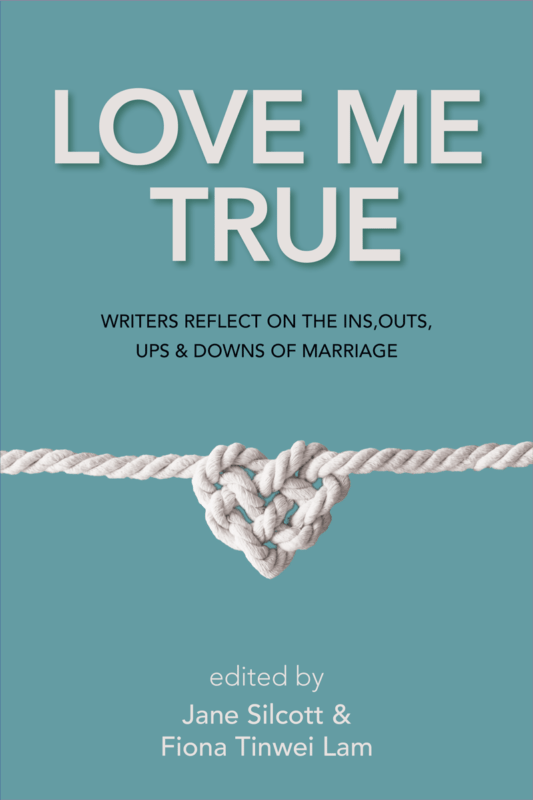 Caitlin Press is bringing back a little love to CanLit this Valentine’s Day, with the release of its new non-fiction and poetry anthology, Love Me True: Writers Reflect on the Ins, Outs, Ups, and Downs of Marriage, which launches tonight in Toronto at Queen Books.

Lam and Silcott first met as students at University of British Columbia’s creative-writing program, and are mutual admirers of each other’s work. In 2009, Lam co-edited an anthology on parenthood, Double Lives: Writing and Motherhood (McGill-Queens University Press), for which Silcott was a contributor.

How did the initial idea for the anthology come about?
Lam: Jane writes about real life with warmth, intelligence, and humour. There was a piece she wrote about camping with her husband. I had never been camping, but I thought, “Wow, she really captured the tensions.” I admired her bravery for writing about personal matters that would be considered taboo by other people.

When I started exploring marriage in non-fiction in a couple pieces, I referred to Jane’s on the same subject. She has been married a lot longer – I’ve been single longer than I’ve been married – so it was good to see stories about conflict in marriage. I thought I’d love to read more about how people experience the trials and tribulations of marriage. I approached her a couple times tentatively and then I got more pushy: “C’mon, this a great idea, no one else has done this as an anthology.” I had a number of former students and colleagues who had written on the subject already, and I knew poets who had written on it or who had gone through interesting or difficult times.

How did you select pieces for the anthology?
Silcott: I teach at University of King’s College in the long-distance creative non-fiction program. I’ve really been immersed in creative non-fiction for the past eight years and I love essays and personal narratives of any kind. I did know of some pieces that were already out here, and that’s how Fiona wooed me. She said, “Don’t worry we’re not going to be soliciting all new material. There is already a lot of great stuff out there. We’re going to curate and collect.”

Lam: We also talked to writers who had a particular experience in their marriage as we wanted to try to touch on as many aspects and situations and circumstances that people find themselves in. Everyone’s marriage is so different. As individuals, we bring our own needs and twists and strangeness.

We found one person who we knew through the Creative Non-fiction Collective Society who is polyamorous. I had to pester her to write about it because she wasn’t initially inclined, but with much encouragement she wrote an interesting and funny piece about having three partners at the same time and how that worked.

A core piece we had identified was Susan Olding’s piece about adultery, “In Anna Karenina Furs,” a longer rumination about the end of her marriage and the start of a new relationship. It is so well written and thoughtful. There’s Yasuko Thanh, who, when she was very young, was involved with a drug-addicted, mentally ill young man who was obviously very charismatic. He really wanted to get married, and her story [“Beach of Love and Death”] is how she dealt with that. There is also Kara Stanley, who had written a written a book about her marriage to a musician who had a terrible accident and was in a wheelchair. [“Bees of the Invisible”] is basically an epilogue to her book about being married to someone with a very severe disability. So there are people who had those kind of experiences who we thought would be a very important part of the book. We wanted to include diverse experiences, diverse backgrounds as well.

The anthology is divided into themes such as decisions, commitment, partings, and celebrations. Did you go into the book knowing what those themes would be or did they evolve naturally once you had all the submissions?
Lam: In our proposal, we covered themes like adultery and abuse, arranged marriage, separation, and death. It was a list of issues, but then as the pieces came in, it seemed pretty clear what the main section headings should be. There is some overlap because some stories have weddings. Another thing that came up a couple times is ambivalence. We also wanted to make sure we covered the decision, for example, not to get married, or not to stay married because that is very common, too.

Silcott: Fiona wrote a wonderful piece about the legal ramifications and history of the law around marriage, and there are pieces on the evolution of it, gay marriage, and changing laws. We wanted to have that aspect as well, as well as the relationships.

Marriage has traditionally been a topic explored mostly by women. Was it a challenge to find work by men?
Lam: It is predominantly women, but there are a few, especially poets.

We had to have Kevin Chong’s piece [“Every Stepfather Has His Day”] from The Walrus about basically having to marry the kid as well as the mother of the kid and that experience, because intermingled families are so common. There’s a wonderful piece by Chris Tarry [“The Good Man”] about a marriage ending, and his wild and crazy time before he met another woman to marry.

Why did you decide to include poetry alongside the creative non-fiction work?
Lam: It’s a little unusual for a non-fiction anthology. My background is in poetry, and I know that many people have written on marriage through poetry. Poetry really distills experience, those intense moments, and there are already some incredible works about jealousy, sorrow, and love. And of course love and poetry go together through Valentine’s Day, but I thought wouldn’t it great for non-fiction readers to read Canadian poets who have written so eloquently and lyrically and intensely about these important moments, and wouldn’t it be great for some poets to read some beautiful lyrical non-fiction by the likes of Gina Leola Woolsey, Kara Stanley, and Ellen McGinn.

I think it really works because after you read a really long intense piece, a poem with its slivers of images creates a great balance.