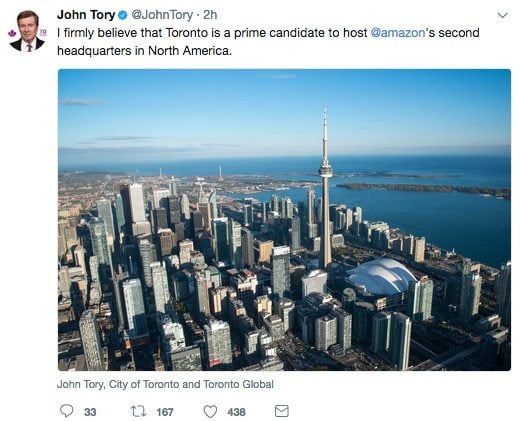 Toronto Mayor John Tory wants Amazon to set up shop in the city. The U.S.-based digital retailer announced on Sept. 7 that it plans to open a second headquarters – dubbed “HQ2” – in North America, one that could employ up to 50,000 workers.

“I will be leading the charge to make the case that Amazon should call Toronto home,” Tory tweeted shortly after the announcement.

In a press release, Jeff Bezos, Amazon’s founder and CEO, says he expects “HQ2 to be a full equal to our Seattle headquarters. Amazon HQ2 will bring billions of dollars in up-front and ongoing investments, and tens of thousands of high-paying jobs. We’re excited to find a second home.”

The location will be determined via a proposal process. In its release, Amazon’s list of preferences includes:

HQ2 could be, but does not have to be: