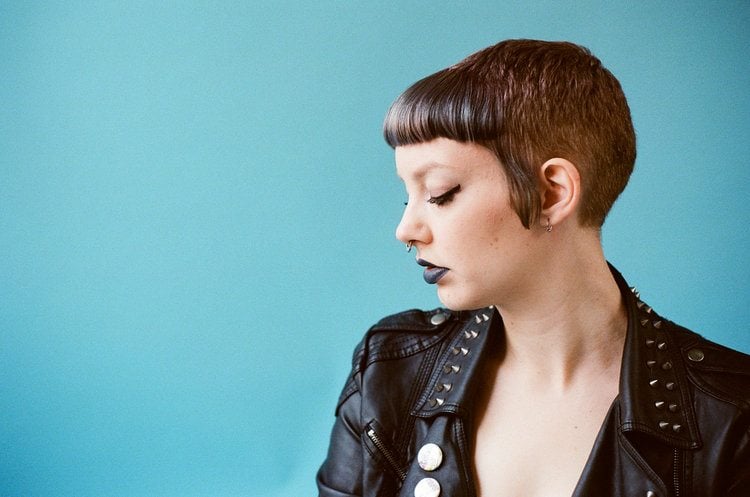 Montreal-Toronto writer and artist Jessica Bebenek, whose focuses are language and textiles, is one of a handful of creators with literary-minded installations at this year’s Nuit Blanche. The all-night art show takes place at locations across Toronto from sundown on Sept. 30 to sunrise on Oct. 1.

Q&Q spoke with Bebenek about her exhibition, The Waste Land, in which she transcribes T.S. Eliot’s poem of the same name into a knit tapestry. The project questions concepts of the arts’ coded languages, intended audiences, and the devaluation of “women’s work,” like knitting.

What inspired this project and its connection to “The Waste Land”? Firstly, I’m working with “The Waste Land” because it’s a poem that I love. People often think I’m trying to take Eliot down. But a big part of loving something is criticism: asking it to do more. There is so much to work with, and I’ve spent countless hours reading, dissecting, and researching the poem. But I’m also well aware that not everyone has a PhD in Philosophy (as Eliot did), nor do they have the opportunity to work towards one. My performance is a form of reinvention, of respecting different groups of people’s experiences and forms of self-expression. I blend boundaries in many aspects of my life: institutional academia and lifelong poverty, lyric poet and textile artist, academic researcher and practicing witch. I understand that institutionally respected forms of knowledge are not the only ways of understanding the world. Since before written history, women have been expressing themselves in their textile work, telling their stories through their designs. This performance is an attempt to blend my dual histories, translating Eliot’s self-expression into another form of expression – one which Eliot would likely not be able to “read,” but one which a knitter who has never encountered “The Waste Land” could understand.

What connection do you see between literature and multi-discipline visual art? For me, the blend of these forms was natural. Because I am primarily a poet, it feels more as if I’ve brought my knitting practice into literature. I’m drawing on a (fraught) tradition of conceptual poetics that often treats words as materials rather than signifiers of meaning. In this performance, Eliot’s words become data for me to manipulate into another form. In creating the knitting pattern, I scan the poem to find out the stressed and unstressed syllables, then knit the stressed beats as knit stitches and the unstressed as purls. In this process of translation, the “data” moves from printed word, to rhythmic sound, to binary code, to woven textiles. I can’t help but wonder what other forms it could pass into through collaboration with other transdisciplinary artists.

I’m very interested in coded languages and hidden knowledge, how we are constantly failing to communicate, or communicating in unknown ways. In this performance, I occupy the liminal place of the translator – I understand the languages of both poetry and knitting. But I wonder, how will people interact with this performance? What understanding will poets bring to it, or knitters, or others with knowledge and experiences unknown to me? Ultimately, I want people to encounter the performance on their own terms.

Are there barriers to entry in literary arts, and what can be done to counteract them? I think there is a significant amount of exclusion in literature and fine arts and this performance is in direct conversation with those barriers. It is important to me that viewers don’t need to understand the poem “The Waste Land” to experience my performance of The Waste Land. I give hints towards my literary heritage – I’m surrounded by academic anthologies of American and European poetry; T.S. Eliot’s reading of “The Waste Land” plays loudly throughout the entire performance – but ultimately the focus is on me, a woman knitting.

The 12-hour duration is an integral aspect of the performance – I want to make visible the very real effort that goes into the production of textiles. Works of skilled craft (or “women’s work”) such as sewing, knitting, embroidery, and other needlework have been systemically devalued since the Industrial Revolution because they do not hold the same capitalistic valuation as waged labour. But the reality of textile work is that it involves very real effort and is physically and mentally laborious. I am using my body in this performance to make this form of labour visible, as I simultaneously make Eliot’s words tangible.

View Bebenek’s performance at the freight elevator at 401 Richmond St. and/or watch the live-stream on Instagram, @notyrmuse.