Over the last decade, Will Ferguson has made the seemingly effortless transition from successful humorist and travel writer to successful comic novelist. Generica, his 2001 satire of the self-help industry, was a surprise hit at home and in the U.K. (the U.K. title, Happiness™, has since been applied to domestic reprints). Spanish Fly (2007), his picaresque novel of Dust Bowl–era con men, impressed many readers and critics with its rich characterizations and plot twists. Even Ferguson’s most recent travelogue, 2011’s Beyond Belfast, largely avoided the zingers and easy cultural dislocations that defined much of his earlier work.

Perhaps feeling constrained by even the comic novel’s limitations, Ferguson has entered the ranks of literary novelists with 419, a story that follows a Canadian editor from her comfortable life in Calgary to neo-liberalism’s lawless frontiers in the oil- and blood-drenched streets and backwaters of Nigeria.

The novel begins with a series of fragmented, almost impressionistic scenes that unfortunately display all the hallmarks of the Serious Canadian Novel: unnamed characters, landscape descriptions, italicized passages, and a high tone notable (somewhat ironically, in this instance) for its utter humourlessness. There are also ponderous rhetorical questions, including the one that begins the novel: “Would you die for your child? This is the only question a parent needs to answer: everything else flows from this. It is the only question that needs answering.”

Four storylines emerge from the opening section, each connected – though not always directly – to the car-crash death of Henry Curtis, a retired Calgary school teacher. Given the nature of Henry’s uneventful, button-down life, the police do not initially suspect foul play, in spite of seeming incongruities at the accident scene, including a mysterious second set of tire tracks.

More troubling clues come to light. Henry’s shared bank accounts have all been recently emptied, the family house remortgaged, and their credit cards maxed out – all without the knowledge of Henry’s  surviving wife. Henry’s death is soon ruled a suicide, and when the police confiscate his hard drive they find a trail of emails charting Henry’s hellish descent into the depths of a Nigerian Internet scam that left him penniless. Henry’s wife and two grown children are devastated, but only his daughter, Laura, a reclusive copy editor, vows to take action and track down the men who destroyed her father.

Woven into the investigation and revenge narrative are the stories of three young Nigerians: Winston Balogun, the educated but futureless email scammer responsible for the ruin of Laura’s father; Nnamdi, a fisherman’s son co-opted into the petroleum black market after his village ecosystem is destroyed by wanton oil drilling; and Amina, a pregnant waif fleeing her extended family of cattle herders in the north for the promise of a new life in the southern cities.

The novel comes to life when Ferguson dispenses with jarring short scenes and fully immerses readers in the intersecting stories that propel the narrative toward a series of dramatic collisions and reconciliations. Ferguson’s eye for local detail and power dynamics animates an early scene in which Laura, disembarking in Lagos for the last stages of her journey to confront Winston, is questioned by a suspicious security official in the airport. The scene achieves a charged, claustrophobic feeling of imminent disaster, which is all the more effective for Ferguson’s skilful evasion of any overt confrontation.

Even better are the scenes that take readers into the surreal criminal underworld of Nigeria’s 419 Internet scams (named for the section of the Nigerian criminal code dealing with obtaining funds illegally). Readers follow Winston’s passage from successful free agent to reluctant cog in the vast, interconnected schemes of Ironsi-Egobia, a sociopathic criminal mastermind and one of the most compelling villains in recent fiction.

The novel is further enlivened by sharp dialogue and imagery. Looking out from her apartment window at Calgary’s crane-crowned winter skyline, Laura sees “a city that was constantly erasing and rewriting itself. A cold city, exhaling steam.” Later, Nnamdi remembers the day the men from the oil company suddenly emerged from the dense mangrove thickets to stake the villagers’ ancestral land: “More and more men boiled out of the [jungle] gap like ants.”

But too often, especially in the novel’s first half, the prose reveals a talented author working against the instincts and storytelling gifts that served him so well in his other works. Hopefully Ferguson finds equally compelling material to work with in his next novel, be it comic or otherwise, and this time trusts his gut a little more.

Correction: An earlier version of this review mistakenly identified “419” as the area code used by the Internet scammers in the novel. Q&Q regrets the error. 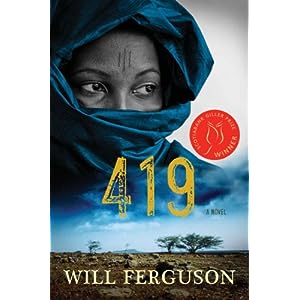 Order this book on Amazon.ca today