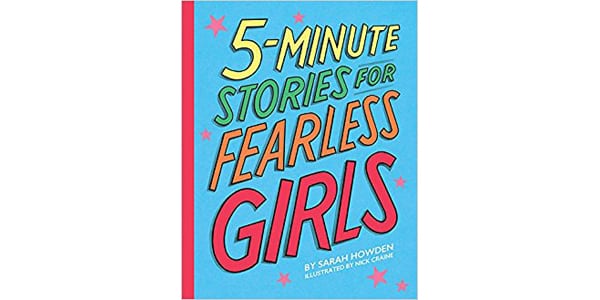 If the title of this book feels familiar, there is a good reason for that: the last few years have witnessed an explosion in non-fiction promoting strength, bravery, and resilience in girls. Examples include 2007’s The Daring Book for Girls and 2016’s Good Night Stories for Rebel Girls. With its appeal to a younger audience (although not as young as the Little Feminist Board Book Set), 5-Minute Stories for Fearless Girls brings something new to the table, while still succumbing to some of the same limitations that dogged similar works.

Aimed at readers aged four and up, the book features 12 brief biographical tales (more story-like than the sketches in Rebel Girls) set alongside vibrant, full-page illustrations. Many of the stories begin with a formative childhood moment (Amelia Earhart building a homemade roller coaster; hockey player Hayley Wickenheiser practising on her backyard rink) or are narrated from the perspective of a child experiencing a brush with greatness (a little girl attending her first ballet is inspired by Misty Copeland; a sick child is enchanted by a visit from Princess Diana). Each story offers a lesson: for instance, the account of teenager Deepika Kurup’s development of a solar-powered water filter stresses the importance of asking questions – the most important of which might be as simple as “How can I help?” A mirror on the invitingly tactile back cover encourages readers to answer the question, “Are you fearless, too?”

One question readers might consider is, are these stories really only for girls? And if this is the case, why only “fearless” girls? There are plenty of examples in this volume of girls who were afraid of failing (Jane Goodall learned to combat her fear with patience; Michelle Obama, with perseverance and self-assurance) and whose great achievement was overcoming those fears. One might wonder, however, in what respect Ruth Wakefield, the inventor of the chocolate chip cookie, could be described as “fearless.” (It’s not clear in her write-up.)

And yet my five-year-old daughter was sufficiently inspired by the heroics and achievements of Viola Desmond and J.K. Rowling to spend a morning writing and illustrating her own book, titled Girls Can Do Anything. That’s testament enough that, worthy marketing aside, these are important stories that resonate and warrant continued retelling.