A Brief History of Oversharing: One Ginger’s Anthology of Humiliation 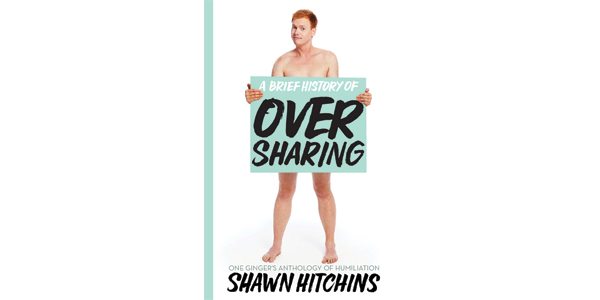 Shawn Hitchins dedicates his debut collection of essays to two people: “Harrison Ford, for making me gay,” and “my father, for making me a comedian.” That salty-sweet-salty combination is Hitchins’s go-to mode in A Brief History of Oversharing, in which each moment of sincerity or loss is sandwiched by punchlines and parody.

Most of the 25 essays start off with some glib declaration (“I hate sharing”) or a timeless piece of vague advice from a mentor, drag queen, or drag-queen mentor (“Never idolize anyone alive. … You can only be disappointed”). This playful and accessible tone is sustained throughout, whether Hitchins is describing a summer performing in a B-grade drag trio in Provincetown, Massachusetts, or running through a brief typology of various theatre-industry “sweater assholes” (“the person in a creative or executive position who wears a comfy and cozy looking sweater … so that they can spout the most brutal and homophobic slurs while retaining a professional likability”). Yet taken as a whole, there’s a gentle depth to the collection, encouraging each of us, through bumbling example, to learn to accept our own quirks and flaws.

The main engine of the book, as implied in its title and subtitle, is humiliating self-deprecation. Hitchins teases himself mercilessly, treating his failures as final and his successes as flukes. He reflects, for example, on one of his crowning moments as a performer – the story of the Ginger Pride Parade at the Edinburgh Fringe Festival, which he innocently orchestrated. Though the event was a total hit, the story is couched in self-doubt and apology. Likewise, Hitchins’s saga about donating sperm to a pair of friends avoids being overly tender by giving ample space to the undeniable awkwardness of a process he sums up as “baking a nine-month-long soufflé.”

Hitchins is a quick wit, good for an extended chuckle rather than debilitating guffaws. Nearly every sentence contains a clever comparison or a sassy jab, yet the prose is straightforward and the pages fly by. Certainly, some of the stories are filler, and the whole “small town gay theatre kid” bit may feel played out for some. But the humour and honesty win out, showing that, like many good comedians, Hitchins is willing to excoriate himself to amuse – and, just maybe, enrich – his audience.