A Brief View from the Coastal Suite 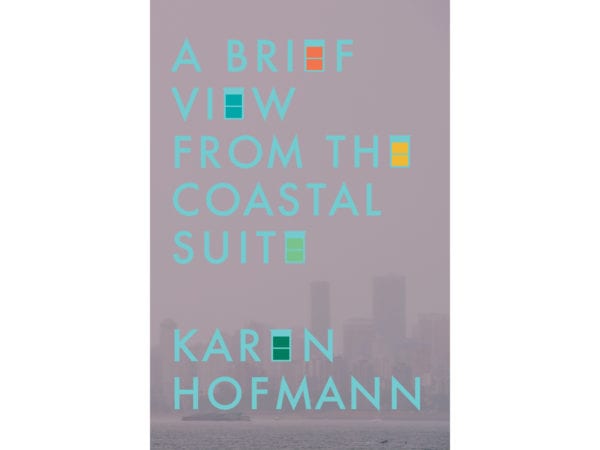 Karen Hofmann’s novels deserve a place on the shelves of discerning readers across the country. Her 2014 debut, After Alice, was a gorgeous evocation of the Okanagan Valley, which she followed with 2017’s What Is Going to Happen Next, a fascinating novel thanks in large part to its original portrayal of family.

That family was the Lunds, whose hippie father left his children to run wild in their remote B.C. community after their mother was confined to a psychiatric hospital. And though that type of depressing story of trauma in the wilderness fits a certain CanLit trope, Hofmann opted for something more interesting, shifting her setting to 1990s Vancouver in her perfectly titled novel. What does happen next to children who grow up in such a fashion? How do they make their way in the world? And how can people raised so differently – older sister Mandalay went back to live with their mother, Cliff and Cleo grew up in foster care, and baby Ben was adopted by a wealthy family – come together again years later as a unit?

Hofmann’s latest, A Brief View from the Coastal Suite, is a sequel to that book and an extension of those same questions, as well as an interrogation of class and capitalism set just before the 2008 economic meltdown. Brother Cliff is now a landscaper, and the dilemma he faces in his work is an excellent metaphor: developers are getting rid of trees because everybody wants a sea view from their houses on the hill, but the loss of the trees has destabilized the soil and soon everything’s going to come crashing down.

Other than Cliff, no one suspects what’s about to go wrong. Cleo, a designer/engineer, is making more money than ever before but now struggles to balance work and family. Meanwhile, her sister Mandalay, an artist, continues to resist materialism, raising her twins in a downtrodden neighbourhood with the support of her affluent ex, but she’s beginning to wonder if her principles have their limits. And youngest brother Ben is supposedly Cliff’s partner in the landscaping business, but the extent of his involvement consists mainly in racking up expenses. The friction between these different lives serves to underline the novel’s sense of tragic inevitability. It’s going to be a trainwreck, but the reader can’t look away.

Hofmann’s characters – like her sentences – are realized with marvellous specificity, and so are these characters’ day-to-day lives, domestic and professional. Such attention to detail creates an engrossing, visceral reading experience. And while A Brief View from the Coastal Suite does suffer mildly from the burden of its characters’ histories (the novel stands alone, but probably works best when read in sequence with its predecessor) and an ending that is not quite satisfying (what is going to happen next?), it’s still a rich and vivid read capturing a place in time that serves to illuminate the present moment.