A History of Canadian Fiction 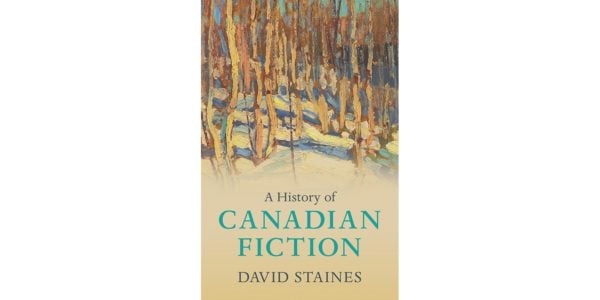 Pretty much everything you need to know about the new single-volume history of Canadian fiction in English, by noted academic and editor David Staines, can be gleaned from the book’s cover. The image – an oil sketch of birch trees in the winter, resplendent in pale yellow and sepia tones – is by Tom Thomson, one of this country’s most iconic and revered artists. Though many critics note Thomson’s unique brush style and suggest this locates him in the avant-garde of early 20th-century landscape painters, what is abundantly clear about his enduring influence is the degree to which he has entered the Canadian establishment: his nature paintings continue to serve as shorthand for the rugged majesty of the Canadian outdoors.

Thomson’s canonical stature speaks volumes about Staines’s conception of his subject. The former dean of the faculty of arts at the University of Ottawa, where he is still a professor, Staines was the general editor on McClelland & Stewart’s New Canadian Library series, a reprint program that effectively codified the canon of Canadian literature for several generations of students and general readers. The books and authors that have come to be viewed as foundational to an understanding of CanLit – Roughing It in the Bush, Sunshine Sketches of a Little Town, Settlers of the Marsh, As for Me and My House, The Mountain and the Valley, The Edible Woman – all found a place in the ranks of the NCL. All had Staines’s prior imprimatur, so it should be unsurprising that these canonical works get pride of place in this new survey.

Indeed, what a reader finds in A History of Canadian Fiction is a potted tour through the establishment-friendly version of Canadian literary history, from its pre-Confederation days when British romanticism held sway to the nationalist era that opposed what it considered outsized influences (first Britain’s, then America’s) and on to the present era of proliferation.

Perhaps inadvertently, Staines illustrates the major factors that have helped underpin much of CanLit’s development: the sentimentalism of Lucy Maud Montgomery; the misguided belief on the part of Stephen Leacock that humour “is essentially a comforter”; the nostalgia of Ernest Buckler, who felt that, in Staines’s words, “the urban destroys the rural Eden”; Robertson Davies’s focus on elite or “restricted Canadian worlds” and “bygone worlds of England.” We get nods to feminism and Indigenous literature and a kind of timid modernism (espoused in part by writers such as A.M. Klein, a poet whose one novel gets inexplicable mention), but what is most profound overall is an observation by Mavis Gallant, which Staines quotes without comment: “Caution and neutrality, our most distinctive traits, have kept us from producing anything new and original in every field but radio.”

Gallant was uncharacteristically incorrect in her assessment, at least in retrospect, though it’s difficult to divine this from Staines’s selections in this study – the vast majority of which are by writers long found on university course syllabi, naturalists, and postmodernists writing in the mode of historical romance, or award winners.

Virtually no consideration is given to genre writers, other than obligatory nods to Atwood’s dystopian science fiction and Patrick DeWitt’s neo-Western The Sisters Brothers. Important practitioners in the realm of mystery and crime writing – such as Peter Robinson, Louise Penny, and Linwood Barclay – go unmentioned, as do sci-fi giants William Gibson, Robert J. Sawyer, and Nalo Hopkinson. Important horror writers Andrew Pyper, Nick Cutter, and Tony Burgess are nowhere to be found. Neither is there any mention of the tradition of Canadian pulp writing so diligently resurfaced in Brian Busby’s Ricochet line of paperback reprints, which included work by literary writers like Brian Moore and Hugh Garner operating under pseudonyms.

These strains of English-language writing in Canada have been equally important; if sales and public recognition are any kind of yardstick, they are much more important than a lot of what Staines chooses to focus on. So too is the submerged tradition of avant-garde writing in Canada, a mode Staines seems more or less innocent of. Groundbreaking works from the likes of Scott Symons (a trailblazer for LGBTQ+ fiction in this country) are missing in action, as well as poet–novelists Gwendolyn MacEwen, bpNichol, and Daphne Marlatt (whose novel Ana Historic seems much more worthy of consideration than Klein’s largely forgotten The Second Scroll). In the case of the one avant-gardist he does treat at length, Sheila Heti, Staines doesn’t seem to know what to make of her, writing that her novels How Should a Person Be? and Motherhood “transform her own personal anxieties into a fictional mantle to create what could be called non-fiction fiction.” It could also, of course, be called autofiction, which would save some words.

There is nothing essentially wrong with Staines’s conception of Canadian fiction’s broad trajectory, though it is undeniably limited in scope and ambition. By focusing on work he has already deemed essential and ignoring the competing forces and schools of writing that helped build this country’s literature into a towering edifice on the world stage (let’s not even get started on the relative paucity of short-fiction writers on offer here), A History of Canadian Fiction seems like nothing so much as a missed opportunity.