★A Number of Stunning Attacks 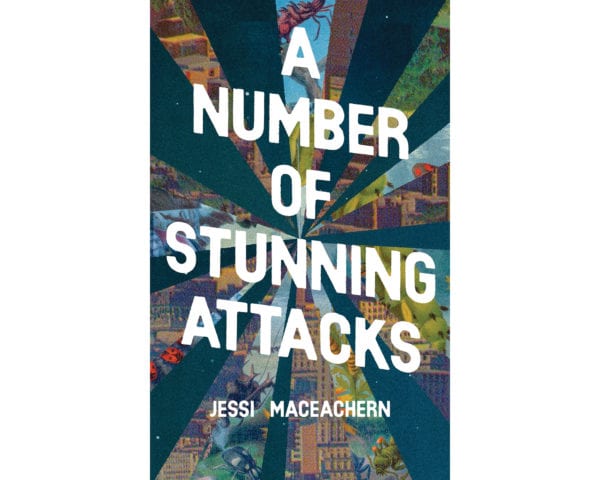 In her debut collection, A Number of Stunning Attacks, Jessi MacEachern creates poetry within individual words and sparse lines. The six poems recall the styles of Nicole Brossard and Anne Michaels in how MacEachern makes use of space on the page to evoke a deliberate fragmentation. These fragments allow MacEachern to reach through poeticisms to draw attention to the gendered body.

The first poem, “The Moat around Her Home,” reads: “If quickness is a synonym for wit / she has arranged a parade / It is proper that the women should remain indoors.” MacEachern does not elaborate on who “she” is; instead she keeps the poem ungrounded, which is necessary to the sensation of dreaming that the “she” character experiences. “Rapid wings / behind / Dream’s / unhinged door,” writes MacEachern, scattering the words across the page. Like dreams, images in these poems come to us only in fragments. MacEachern does not describe a dream: she makes us feel that we are dreaming through the process of reading.

There is a narrative link between the characters from one poem to the next. “Stagger and Sing” introduces an intimate relationship bet-ween two people as the voice fluctuates between third person, first person, and second person. “She knew him / kissed him / was threatened by / You knew him / kissed him / placed your trust in,” writes MacEachern, not providing any clear distinction between the different characters, instead blurring their identities. The poems ask us to relinquish any desire to unravel and understand.

MacEachern’s poetry demands attention to the stunning beauty of her craft, as demonstrated in the lines, “Dynamite shards glinting elbows lock / Forearms in protestation a cross a fight / Eventual moonlight collides with the wall.” Her words create a fortress from attack, a forceful collision that unexpectedly meets the softness of moonlight.

The titular poem offers precise images that resonate with a universality of experience: “A woman’s wide eyes and a PIN for the joint account / instruments for survival in the glaring noise of day / In the produce aisle All eyes widen.” As “she” expands into “a woman” in the collection’s poetic arc, MacEachern slows down and scrutinizes moments of familiarity.

The last poem, “Orwomen,” circles back to the early focus on dreams. The collection closes with “Awomen / the body within the mind.” The abstract mind, where dreams materialize, becomes the outer shell to the body. There can be no more prioritization of the physical body, and A Number of Stunning Attacks’ fragmentation and exploration of dreams conclude with this achievement.

This is not a collection that seeks clarity. MacEachern taps into what poetry does best, which is to bypass logical explanations and dive into an emotional core that here sings of strength above all. Whether the poems aim to draw attention to the interrupted nature of a gendered existence, or uncover a beauty to be embraced in deconstruction, the collection brings a new dimension with each read.