A Rush of Wings 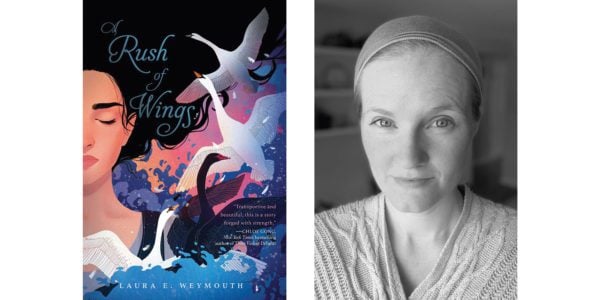 For as long as she can remember, Rowena has heard the wind speaking to her, and has known that magic lives inside her – a magic her mother Mairead deems Rowena too hotheaded to master. When her mother dies an unexpected and ominous death at the hands of a sea monster, Rowena’s certain she has lost her chance to learn the magic that is her birthright. One stormy night, however, two unexpected things happen: Rowena rescues Gawan, a handsome shipwrecked stranger and, upon arriving home, finds her mother miraculously and inexplicably alive.

But the woman is not her mother. Disguised in Mairead’s form is a vicious monster who curses Rowena, Gawan, and her three brothers, robbing Rowena of her voice and turning the boys into swans. Forced to flee, Rowena escapes with the boys, determined to find a way to break the curse and save them all. To accomplish this, Rowena must learn how to use the magic that has eluded her for so long, and she soon finds herself in the middle of a deadly plot, unsure of whom she can trust.

A Rush of Wings is a dark and gorgeously atmospheric adaptation of The Six Swans fairy tale by the Brothers Grimm that manages to be its own story. Through her lush descriptions, and the eerie and beautiful setting of the coastal Scottish Highlands, Laura E. Weymouth effortlessly transports the reader to a world of folklore and magic. Due to the lyrical writing style, the pacing of the story can feel slow at times, but it does pick up in the second half of the book.

One of this novel’s greatest strengths is the emotional maturation of its characters. The relationship between Rowena and her brothers rings especially true; they are in turn prickly, vulnerable, and protective of each other. Rowena herself is depicted as “morally grey,” and although Weymouth could certainly have explored this aspect of her character more thoroughly, she does a good job handling Rowena’s emotions in an unrestrained and authentic way. Refreshingly, the romance takes a back seat and complements rather than overtakes the other relationships in the story.

Ultimately, A Rush of Wings is a beautifully written Gothic retelling that focuses on themes of morality, love and duty, and the meaning of sacrifice.