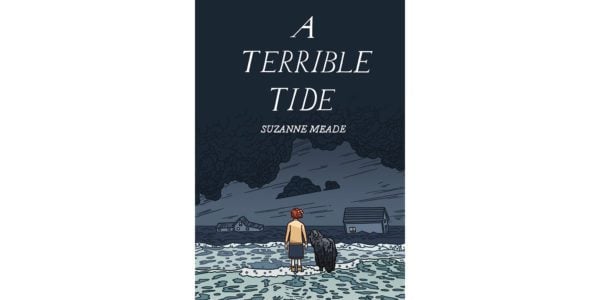 On November 19, 1929, Celia’s celebrating her 13th birthday with her family when their house on Newfoundland’s Burin Peninsula begins to shake. Alarmed, everyone runs outside. Was it an explosion? Nobody knows. Since there is little damage, everyone goes about their day.

When Celia heads out to search for her dog, Boomer, she notices there’s no water in the harbour and then hears an ominous sucking sound, followed by a roar. She runs in the nick of time, pursued by a massive wave. Celia is swept up but manages to survive by clinging to a floating board, guided by Boomer.

When the water recedes, the town is in ruins, several people are dead, and Celia’s little sister Winnie is unconscious. The heart-pounding terror of the tsunami gives way to a stark reality: the village’s only phone line is dead, and the winter food stores are gone. The entire community must co-operate to survive, with the hope that a government boat will bring food and medicine before it’s too late.

In this compelling middle-grade novel that brings a lesser-known disaster to life, Celia is an engaging protagonist, at once perceptive and naive, marooned in the limbo between childhood and adulthood just as her life is completely upended. The reader remains invested in her as she rides an emotional roller coaster of worrying over her siblings, doing her best to help while being a grumpy teen, and trying to ignore her gnawing hunger as the food runs out.

Meade differentiates the members of Celia’s large family with a few deft strokes, and the main characters are richly drawn, their speech peppered with local words like “hurly burly,” “neeps,” and “sleveen.” This tough, isolated world, with its taciturn parents and gruff fishermen, is vividly portrayed. When help finally arrives, Celia faces new challenges as her family makes the difficult decision to move to St. John’s.

With an ending that is both tender and hopeful, A Terrible Tide provides young readers with a glimpse of how a determined girl can find the inner strength to cope with the unexpected in a world turned upside down.