A Train in the Night: The Tragedy of Lac-Mégantic

Lac-Mégantic made headlines across the country and around the world when a train derailment destroyed half of that sleepy Québec town one summer night in 2013, taking 47 lives in an instant. Now, in an English edition translated by Governor General’s Award–finalist W. Donald Wilson, Québécois duo Anne-Marie Saint-Cerny and Christian Quesnel offer a pointed and moving graphic essay about the disaster, reflecting on the tragedy and its underlying – and unresolved – causes.

The fiery explosion of the oil tankers that levelled Lac-Mégantic was well documented by the news media at the time. But A Train in the Night also exposes layers of greed and negligence on the part of both corporate and governmental players that created the conditions in which such a disaster became an inevitability. Saint-Cerny’s investigative journalism on this file was originally published as a full-length book, Mégantic: Une tragédie annoncée, by Montreal house Écosociété and garnered Saint-Cerny a place among the Governor General’s Award finalists in 2019. (The English edition, Mégantic: A Deadly Mix of Oil, Rail, and Avarice, also translated by W. Donald Wilson, was published by Talonbooks in 2020.)

While the visual medium of the graphic essay is equally effective in presenting the hard (and disturbing) facts of the matter, Saint-Cerny pursued this collaboration with Quesnel in order to better articulate the larger emotional story of the victims. Saint-Cerny’s text draws extensively on her earlier research, but this new work, published by the progressive Toronto press Between the Lines, also includes expressive moments that humanize and contextualize the tragedy, including song-fragments from a video by one victim, the poetry of a local child who survived his family members, and ground-level accounts of the ways the citizens of Lac-Mégantic lived before and after that devastating night. 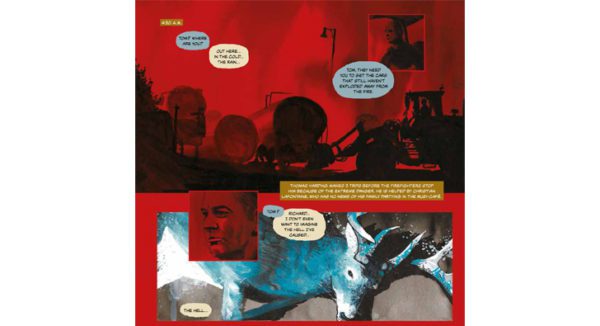 Quesnel’s art is well suited to this project, and their collaboration in its French-language edition already netted them the Eco-Fauve Prize (for comics addressing environmental themes) at Europe’s most prestigious comics festival in Angoulême earlier this year. Drawing from a wide range of imagery from Lac-Mégantic and beyond, the pages of the book are characterized by bold layout and design choices, and a melding of styles that often evokes collage. The graphic- essay medium provides the emotional power that this story deserves, but the art also contributes significantly to highlight the disaster’s resonance with other issues, other tragedies, and other struggles – the creators clearly situate the events at Lac-Mégantic amid larger conversations about Indigenous land rights and extractive industry, displacement and migration, and the need to put people before profits.

Though many readers will have some knowledge of the events at Lac-Mégantic, A Train in the Night serves not only as a moving memorial to the many lives undone in that moment, but also as a startling and political call to action, in the hope that the power of this story might prevent another such tragedy in the future.