Afterwork: Essays on Literature and Beauty 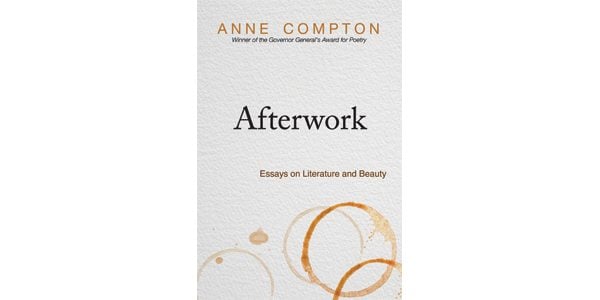 Governor General’s Literary Award–winning poet Anne Compton’s latest book is a collection of essays surveying the writer’s life and interests, all bound by Compton’s lyric voice. Afterwork begins with an essay on the first summer of her retirement from teaching at the University of New Brunswick. Compton explores the states of mind that operate in different forms of writing – such as the review, essay, and poem – then tries to settle on the best time of day to write. She can’t do so, because she finds that absent the structure her job provided, “solitude and purposelessness increase range, release the mind to roam.” Her plainspoken voice offers clarity while retaining the complexity of her experience. Attentive to the banal rhythms of daily life, such as cooking and family matters, Compton’s writing conveys an intimacy that urges the prose forward.

The second essay, “How Does the House Mean?,” forays into the domestic, beginning with an observation about a reviewer who noted there were 32 instances of the word “house” in Processional, Compton’s second book of poetry (which won a GG in 2005). Less autobiographical and more scholarly than the opener, this essay delves into literary analyses of the notion of a “house” as it appears in real estate novels such as John Lanchester’s Capital and Don Gillmor’s Mount Pleasant. The exigeses are vast, extending to remarks on Haussmann’s modernization of Paris in the 19th century and a poem by the Welsh poet Paul Henry. But Compton tempers her sprawling knowledge by ending on a personal note. She extends her progression into the domestic in a subsequent piece, which also includes an analysis of Virginia Woolf’s modernist novel To the Lighthouse.

The intimacy of the opening entry is missing in the more analytical essays, which address poetry and poetics, ekphrasis and the art of the response, and the interdisciplinary complexity of beauty. Compton’s contributions are valuable, however, especially in the essay about place, in which she comments on the differing lineages in the east coast and the west coast, recalling in particular poets such as Mark Strand and Milton Acorn.

Throughout the collection, Compton returns to themes that have occupied her throughout her career: home, childhood, history, science, and writing. She discusses compiling anthologies (she edited both ModernCanadian Poets and New Canadian Poetry) with generosity and intimacy, characteristics that return in the book’s closing piece, “The Listener.” Ultimately, distinctions between the personal essays and the scholarly ones don’t affect a reader’s experience; Afterwork is accessible, insightful, and filled with clarity and guidance.