All We Leave Behind: A Reporter’s Journey into the Lives of Others 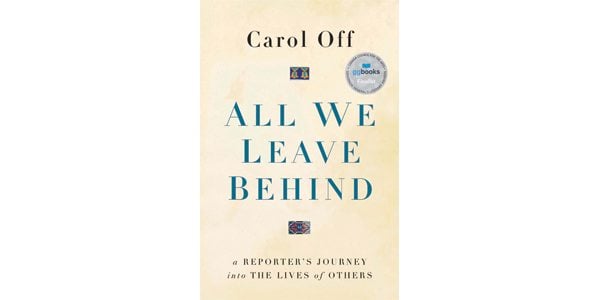 In early 2002, when the world’s attention was aimed at the war in Afghanistan, CBC Television journalist Carol Off landed the thing people in her profession live for – a good “get.” In Kabul, Off was introduced to Asad Aryubwal, who was willing to talk on camera about a notorious warlord named General Abdul Rashid Dostum and his involvement in a massacre of POWs. Off would fly home and later receive accolades for her award-winning documentary; Aryubwal, the local who remained behind, was left with two choices: banishment or death.

Off, who currently hosts CBC Radio’s As It Happens, has written a riveting account of that interview’s impact. She details how she departed from the journalistic ideals of “objectivity, detachment, disengagement” after she found out – six years later, while on assignment in Pakistan – about the wretched plight Aryubwal’s family was in. Having become friends with their precocious eldest daughter through texts and emails, Off decides she must help the family reach safety in Canada. In doing so, she crosses “the line that artificially separates a reporter from the story.”

Off has no shortage of tangents to follow, and deftly weaves together a taut narrative that shuttles from a history of politics in Afghanistan and neighbouring Pakistan to episodes as a foreign correspondent covering Canadian forces in Kandahar. She recounts the Aryubwals’ story as well: the affluent father who was disappeared by the Communists; the conservative family who disapproved of Aryubwal’s ethnically mixed marriage; the secret school for girls his wife hosted under the Taliban; and life in a country so politically unstable the family had to flee its home four times.

The second half of Off’s book focuses on the attempt – both desperate and maddeningly slow – to get the family to Canada. It takes years for the Aryubwals to become officially recognized, via a murky and potentially corrupt process, by the United Nations High Commission on Refugees. And another three years go by as the Stephen Harper government implements roadblocks to refugees entering the country.

Throughout the book, Off struggles with the moral imperative behind her profession. As the stress of waiting in the volatile city of Peshawar, Pakistan, takes its toll on the Aryubwals, she realizes that she “might have been the worst thing that ever happened to the family.” The journalist’s best day may be someone else’s worst.

While Off is pursuing her personal mission with an ever-growing support network that comes to include colleagues, churches, and a human rights lawyer, she finds herself covering another refugee crisis, out of Syria. She does not mince words when it comes to her dealings with the Conservative minister in charge of the file, Chris Alexander. He is the subject of an infamous 2014 exchange on As It Happens, during which he hangs up on her.

Thirteen years after Off’s fateful interview in Kabul, the Aryubwal family finally makes it to their new home. All We Leave Behind is a fascinating tale about how one reporter’s request turns an extraordinary family’s life upside down, combined with a cogent examination of her own attempt to hold on to her humanity.