★Annie and the Wolves 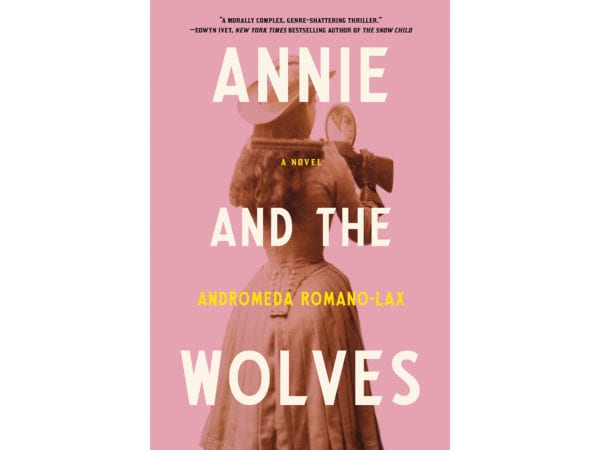 The new novel from Vancouver Island writer Andromeda Romano-Lax, begins with something of a familiar premise: a struggling academic comes into possession of previously unknown archival materials relating to her subject of study, with life-changing results. While A.S. Byatt’s Possession handled this premise brilliantly, Annie and the Wolves approaches the trope from an altogether unique perspective. The result is a novel that is at once thought-provoking, genre-stretching, and viscerally thrilling. It may not be a better book than Possession (that’s a significant bar to even approach), but Annie and the Wolves is a far more powerful reading experience: quirky, heart-rending, and utterly enthralling.

The book begins with Ruth McClintock eking out survival in the wake of a couple of terrible years. Not only is she recovering from a horrendous car accident, her engagement has ended, and she lives alone in the house she grew up in. She is still grieving the death of her mother and the suicide of her younger sister years previous. She has also largely abandoned her academic work, which had focused on hints of abuse in the childhood of iconic markswoman Annie Oakley at the hands of those she referred to only as “the Wolves.” When Ruth takes delivery of a possible Oakley journal – sent to her by a mysterious collector to check its authenticity – her interest is piqued: “The sharpshooter had left behind an unfinished autobiography and some everyday correspondence when she’d died in 1926, but little else of substance written in her own hand.” She quickly becomes confused, however, since “Ruth knew that this dense and formal cursive wasn’t Annie’s.” Instead, the journal seems to have belonged to a psychotherapist, with pages recounting a session with a woman who might have been Oakley.

Together with Reece, a local high-school student and tech whiz whom Ruth initially hired to defrag her computer, Ruth begins to investigate the journal, its provenance, the collector, and the possibility that the patient in question was, in fact, Oakley. As their investigation unfolds, and their relationship deepens, the novel becomes more expansive, and more mysterious. There seems to be some sort of history between Ruth and Reece, which neither of them recall.

And then there’s the matter of Ruth’s dreams, not only of her accident but of what seems to be a future incident, in which her former fiancé is in peril. As the story expands, it incorporates Reece’s past, mysteries in Oakley’s life (including her relationship with Chief Sitting Bull, the Lakota leader who appeared with her in Buffalo Bill Cody’s Wild West show), the assassination of President William McKinley by Leon Czolgosz, sexual abuse in Oakley’s past and in Ruth’s community, the secret behind her sister’s suicide, and time travel. Or time-skipping, as the novel refers to it.

Ruth and Reece gradually come to understand that some survivors of trauma have the ability to move temporally through their lives: into the past and, more rarely, into the future. To Romano-Lax’s credit, this sci-fi twist doesn’t feel forced or out of place, and that shouldn’t be entirely surprising: the author won the Sunburst Award for Excellence in Canadian Literature of the Fantastic for her previous novel, Plum Rains. In Annie and the Wolves, the time-skipping arises naturally out of the characters and their situations, a realistic response to deep trauma, one which may allow the survivors to address the past or shape the future. Thus, we see Oakley returning to her childhood, seeking to settle the score with the Wolves who abused her. Ruth, meanwhile, does all in her power to avert a future tragedy.

The nature of that tragedy will be chilling to readers – it emerges relatively early on that a secondary character may be preparing for a school shooting – but Romano-Lax’s handling of it defies expectations; the mechanisms of time-skipping create a folding of endings somewhat reminiscent of Milan Kundera’s The Unbearable Lightness of Being. The novel resists relying on easy tropes of vengeance or violence for its resolutions; Annie and the Wolves is far too thoughtful, too skilled, to depend on either cheap theatrics or rote sentimentality.

Despite the complexity of the time-skipping concept, its shifting timelines and realities, Annie and the Wolves is an accessible, thoughtful novel rooted in deftly drawn characters and a realistically depicted world. Romano-Lax writes with an easy verisimilitude, even when things turn decidedly strange. But it’s not simply strangeness for the sake of itself. The time-skipping mechanism allows for a deeply felt exploration of the lingering costs of trauma, the nature of history, the limited malleability of the past, and the importance of community and relationships, particularly when it comes to present trauma and its potential to spin out into further acts of violence. The reader clings to the narrative as it gracefully dances through developments impossible to foresee. It’s rare to be genuinely surprised by a novel: Annie and the Wolves is a treasure.