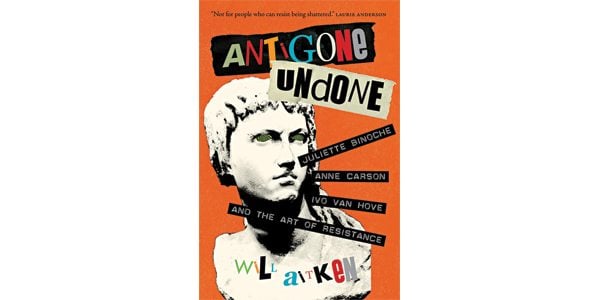 Among the great Greek tragedies, perhaps no other has spawned as many successful adaptations and critical reflections as Sophocles’s Antigone. Novelist Will Aitken reminds readers why Antigone remains such a universally accessible play in this visceral recounting of his own reactions to the staging of Antigonick, a recent translation by the poet Anne Carson. This thoughtful and disturbing memoir poignantly illustrates how, for good or ill, the power of art can transform human understanding.

At the heart of a timeless story that captures the intense emotions generated by an act of female resistance is one of the most sought-after female stage roles: a strong woman – played here by legendary French actor Juliette Binoche – who defies society, her family, and the government. When Aitken relates his (albeit brief) first-hand experience of the production’s rehearsals and Luxembourg premiere, it is not so much an exploration of process and performance as a retrospective of a deeply personal journey, informed by interviews with Binoche, Carson, and avant-garde director Ivo van Hove. Aitken pulls no punches in discussing how the production pushed him into a prolonged period of depression, despairing introspection on the state of the world, and a harrowing suicide attempt.

The author also branches out from the personal to the global to consider the divergent views of Antigone – both the character and the play – from the perspectives of a range of cultural theorists and philosophers who inevitably form Antigone in their own image. He reaches back to Hegel and Kierkegaard (with their inexorable focus on the male gaze) along with Virginia Woolf (who lionizes the ultimate female rebel), while sampling more contemporary views from the likes of Judith Butler and feminist legal theorist Bonnie Honig.

Aitken’s writing style is poetic, vibrant, and unabashedly emotional. His ability to encapsulate the personal and political informs his finding that the art of resistance, as reflected by Antigone’s choices, is necessary in today’s fractured, often totalitarian, and technologically intrusive world. His despair that such resistance is still necessary – and yet overwhelmingly difficult to enact – feels authentic and connected to the contemporary angst undergirding many a Facebook post and media story.

The book’s sometimes disjointed narrative, ranging in tone from confessional to academic, makes it unclear whether the parts serve to create a cohesive whole. Indeed, we are left wondering about the ultimate results of Aitken’s personal journey through the labyrinthine analysis of this play. Perhaps, however, that is the point; the volume is a reflection, not a didactic prescription. Questions are posed rather than answered; insights are presented but fealty to them is not demanded.

Ultimately, Aitken’s hope appears to lie in Binoche’s savagely honest portrayal of Antigone, and her willingness to plunge into the painful depths in order to reach a sense of enlightenment and renewed commitment to deeply felt beliefs. For Antigone – and for Aitken – the future of humanity lies within this courage to encounter and suffer through the pain of resistance.