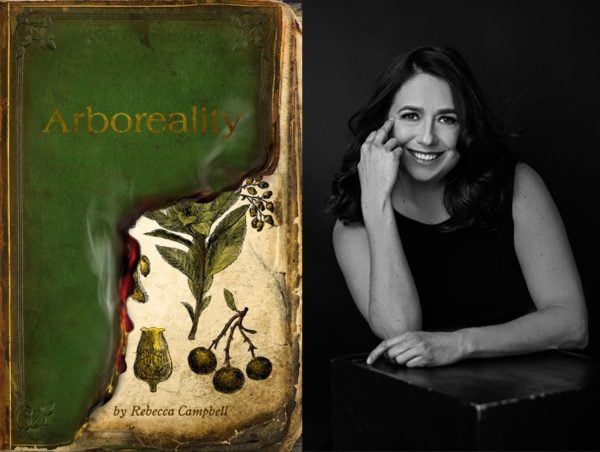 A self-described “writer of weird stories and climate-change fiction” (who “really like[s] ghosts, parasites, and A.I.s” too), Rebecca Campbell explores what-if scenarios that appear fantastical at a glance. Upon closer inspection, though, the Windsor, Ontario, author’s imaginings are just a degree or two removed from everyday reality.

A startling novella-in-stories, Arboreality anticipates the reformations of what one of Campbell’s stories calls the “slow apocalypse,” a steady worsening of environmental conditions already familiar to us. Less a weird story than speculative fiction centred on climate change and its probable consequences, the book’s pieces tell of global turmoil – systemic changes and radical losses as well as striking transformations and hopeful efforts of perseverance. For Campbell (The Paradise Engine), fire, flood, and death might be as inevitable as rising temperatures, yet she also envisions nature and humanity as up to the task of navigating an impending “Dark Age.”

The book grew out of “An Important Failure,” a prize-winning story Campbell published in 2020. It takes pride of place in the collection, preceded by “Special Collections” and “Controlled Burn,” which are set circa 2050 in Victoria and Vancouver Island’s currently verdant Cowichan Valley. The later stories, “Scions and Root Stocks,” “Pub Food,” and “The Cathedral Arboreal,” unfold some five decades later, during which time entire coastlines have flooded, whole populations have relocated, and non-human life forms have succumbed, migrated, or evolved.

“Special Collections” and “Controlled Burn” trace quirky heroic acts. The first features Jude, a teacher who has grown accustomed to pandemics and states of emergency. As the world he’s known disintegrates, Jude commits to a project, rescuing materials from a forlorn university library with unrepaired leaks and delivering them to sympathetic homes all over Victoria. A bibliophile with an earnest cause, Jude faces a dilemma: since he cannot save everything, what knowledge will his choices extinguish?

Set in an emptying suburban development where the air is full of ash, “Controlled Burn” traces an elderly man’s final efforts to hasten a transformation. He plants hardy indigenous species so that his suburban front yard becomes “something else.” His stewardship is an act of erasure, the “crumbling human world” having proven disastrous.

The depleted, picked-over subsistence landscape of the 2050s explored in “An Important Failure” and later stories is a vista of blackened and treeless hills; it’s literally ashy, yes, but changing too. Campbell favours complex storytelling that leaps across time and space. Encompassing tree poaching, marijuana hybrids, violin-making, clonal propagation, and the Little Ice Age, 32-page “Failure” highlights the author’s nimble intellect and magpie interests, though perhaps at the expense of narrative flow.

Campbell refers to corporate relocations, billionaire sanctuaries, and space colonization, but her eye lingers on the sporadic population outposts of southern Vancouver Island that farm and make do by salvaging and banding together to survive (while lamenting lost pleasures of “the old world” and resenting deeply how history has unfolded).

By 2100, that minuscule population isn’t exactly thriving, but it has certainly become the “something else” envisioned in the earlier stories. These settlements are also reliant on the books saved by men like Jude. Campbell’s emblem – a cathedral of living trees growing on what had once been a suburban cul-de-sac – signals unchanging human desires reshaped for a cooperative new epoch. In Campbell’s stories, civilizations are ready to be revived only “when the world stopped ending.” In the meantime, innovations, emergent species, and new philosophies of coexistence give readers respite from the plentiful miseries of charred hillsides and dicey chances of survival.