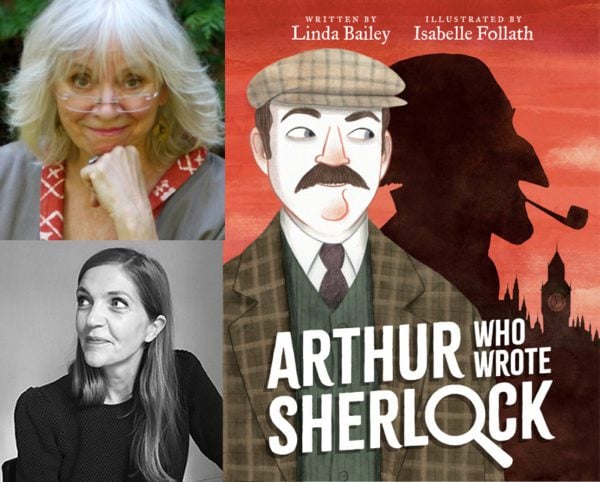 With full-throttle adventure and intimate character portrayal, Arthur Who Wrote Sherlock is like reading one more Sherlock Holmes adventure, but this time Doyle takes centre stage. Readers are introduced with spritely text to the beginning, middle, and end of Doyle’s life, which would have an indelible influence on the creation of one of Western literature’s finest characters. But, the story dives deeper still. It tells of the hardships, the poverty, and even the disdain that overwhelmed Doyle in his fraught relationship with Holmes, who became a public phenomenon.

Follath’s watercolour and pencil illustrations rise to meet the giants of imagination that propelled Doyle’s writing forward – the Bengal tiger of his childhood daydreams sweeps across the page, baring massive fangs and yawning maw amid the lush jungle. As readers are introduced to Doyle’s fictional world – battles with foes, falls down rushing waterfalls – it is Follath’s art that dynamically brings to life Doyle’s prolific imagination.

Bailey and Follath did not want this historical tale to be a dry account, yet more monotonous facts to memorize. The duo wanted readers to know that Doyle’s life embodied the very adventures he wrote of, including expeditions to the Arctic – where he fell not twice, not thrice, but five times into bone-chilling waters! The book tells of ships and people, of landscapes and journeys that made this reviewer look at her hefty book of collected Sherlock Holmes adventures, and read it again with fresh eyes.

The pace of the storytelling and the vivacity of the illustrations are on equal footing. They leap and bound across the pages. This book will surely inspire wonder, breathe new life, and cement conviction into minds doubting the power of their own curiosity and imagination.

In the words of Dr. Watson, “Excellent!”