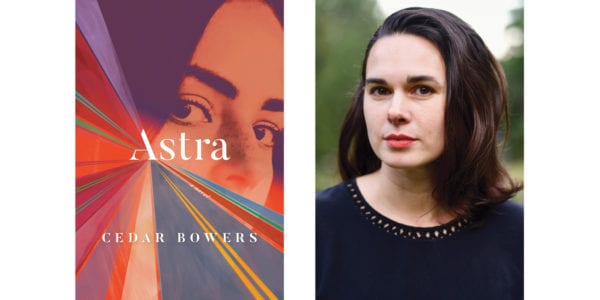 At once a character study and a group portrait, Cedar Bowers’s debut novel takes its name from its heroine, Astra Winter Sorrow Brine, born and raised on Celestial Farm, a British Columbian agricultural commune. With a paucity of tools to help her, she navigates the various urban, socially encrypted milieux in which she spends her often peripatetic adulthood. The structural conceit that animates Astra has us follow its heroine from birth to mid-life through the close third-person perspectives of a different character in each chapter. This approach mirrors Celestial Farm’s polemical emphasis on the collective, while enhancing Astra’s particular magnetism and elusiveness. It also allows Bowers to move through a wide variety of sensibilities with curiosity and generosity of spirit.

Astra’s father was a reluctant parent, to say the least; her mother died in childbirth. She’s reared in an environment at once organic and toxic: Celestial Farm renounces consumerist, capitalist values, yet never manages to shake off the shackles of sexism. Astra works hard and essentially looks after herself, learning to either ingratiate herself with or defend herself against aggressors, depending on the scenario.

The early chapters convey how Astra maintains a chameleon-like persona as a survival technique. To a lonely seven-year-old girl whose familial status was usurped by a baby sibling, Astra becomes the bruised, bug-bitten, brown-corduroyed stranger who crawls in the bedroom window one day during naptime before vanishing just as startingly as she appeared. To a troubled 35-year-old clothing store manager, Astra is a feral, naive, teenage drifter who, eager to please, rapidly transforms into someone who “looks like she’s been raised in a mall, like all Calgary girls.” Later Astra will shack up with a restaurateur in a five-bedroom McMansion, becoming an immaculately made-up suburban mom. Later still, Astra becomes the ideal live-in nanny to an upper-middle-class family before she realizes the precarity of her position and flees. Astra is desperate for affection but only on her own terms – terms she cannot articulate.

Every connection Astra makes seems tenuous, as though friendship demands some indecipherable code. One character comments on the way Astra seems to go through people like someone trying on pants in a change room, and Bowers is careful to provide us with just enough information to comprehend the complexity of Astra’s motives. What becomes evident is that Astra is unusually well suited to be the object of others’ projections, that her particular way of inhabiting – or never fully inhabiting – a given place, of withholding while seeming to surrender, leaves a beguiling space for others to fill with their own agendas.

Astra’s plurality of perspective is its core strength, though at times it seems to prompt Bowers to rush things in a manner that doesn’t feel true to a given character, such as in the chapter involving the aforementioned lonely girl, which ends with a forced, sudden revelation: “Kimmy is loved; it might not always feel good, but she has proof of it every day.” At other times she overstates; Bowers writes how “insecurity is an affliction that occasionally plagues” a particular character, a fact already elegantly implied through action and behaviour.

What lingers, however, are not these minute fumbles but the moments of hard-earned emotional connection that accrue over the course of Astra. There is something moving in the way Astra becomes the dear friend an uppity, insecure busybody didn’t know she needed. Also moving is the awkward way a long-estranged father belatedly forges a relationship with his teenaged son. Bowers is very good at tracking atmos-pheric shifts in domestic arrangements, things usually unspoken or misplaced that can only bloom in the wake of emotional risk. Bowers also has a gift for small, sensorial details, such as the banging sound an old van’s roof makes when it expands in the heat of the sun.

Astra’s epilogue, which suddenly moves from third to first person – to the perspective of Astra herself – is underwhelming, a minor miscalculation. Perhaps because she accomplished so much in sculpting the enigmatic Astra through the regard of others, it’s an inevitable letdown to conjure conclusion or catharsis by finally inhabiting Astra. What the epilogue gets right, though, is in underlining the novel’s ongoing queries into the fraught, liquid nature of family and what we owe our blood relations. Maybe family, as one character suggests, is simply “the people you wake up every morning worrying about.” Or, as another character puts it, it’s “harder to lose the people who never gave you enough, than it is to lose the ones who gave you everything.” Astra comes to give a lot to several people, but she never gives anyone everything. There are things she keeps only for herself, and Bowers never once judges her for it, never once suggests that any one of her characters is easily reducible. Rather, Astra leaves us with the assurance that any single portrait of a person will always be incomplete.